A mix of nourishment, nutrition and nuance 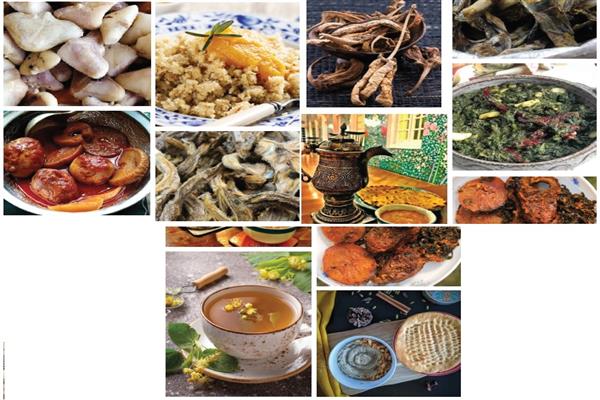 Kashmiri food like its culture is uniquely tasteful and jealously colorful. Kashmiri cuisine is not just about food, it is a celebration of life where traditions, memories, and flavors mix and marry to create an indigenous and unique social experience. During the winter, the food gets even crazier and some lip-smacking items are added to the wide variety of eatables.

Apart from mouthwatering Harissa and smoked fishes, lots of other delicacies are found on the menu in Kashmiri homes during the winter.

Kashmiri housewives are not only good at cooking the many courses of Wazwan but are savvy at coming up with beautiful recipes during the winter as well. These winter foods, apart from being tasteful also have a unique attribute that makes them suitable for the winter and provides taste and texture along with the required sustenance and nourishment.

Apart from Harissa and Pheare (smoked fish), in this write-up, you would get to know about the lesser-known foods that people in Kashmir spend their snowy days eating during the winter.

Hokhe Suin means the dehydrated and sun-dried vegetables that are prepared during the summer and autumn and then cooked delightfully during the winter. Sundried bottle gourd, aubergines, lentils, turnips, radish, and spinach get their own life when the temperature drops to zero during the winter in Kashmir.

The process of preparing the Hokhe Suin is simple. The vegetables are peeled, chopped, and graded; then the salt is applied as a preservative. Afterward, they are put out in the bright sunlight to dehydrate and thereupon packed for the winter months.

“In the past, Hokhe Suin or dried vegetables is all that people ate during the winter because when the snow cut the valley from all the rest of the world and nothing grew on the frost-covered land, Hokhe Suin (dried vegetables) was all that they had. Though fresh vegetables are widely available nowadays in the market people are still hooked to the taste of the dried vegetables,” Masroor Nabi, a shopkeeper at Jamia Market Srinagar. Nabi’s shop is almost one hundred years old and is a one-stop place for all sorts of dried items in Nowhatta, Srinagar.

Some of the vegetables and herbs that grow in the wild and grasslands are also consumed for their medicinal value during the winter. Iberian knapweed, locally known as 'Kratsch' is also dried and eaten during the winter as it is believed to be good for eyesight.

When the westerners came to Kashmir, they thought that the garlands of turnips that hung on the outer walls of every house facing the sun were some sort of totems or amulets to wade off the evil. Rather than holding the locals culpable of stereotype, they didn’t know that these garlands had a far practical use. Known as Gogji Aar in the local parlance, sun-dried turnips are one of the best dishes amongst the Hokhe Suin that people of Kashmir cook during the winter. Gogji Aar is best cooked with Kidney beans (Rajma Dal) and Cheese.

Though dried turnips are consumed in other parts of Asia as well including China, in Kashmir they are prepared in a very peculiar manner. The turnips are first peeled, then washed and thickly sliced. Subsequently, little holes are carved out (with the help of the pointy end of a knife) in the middle of the slices and then all the slices are added to a string which is then tied into a garland and put out to dehydrate in the sun.

In Srinagar, during the year days of a 15th-century saint Hazrat Sheikh Dawood of Batmaloo, Srinagar, people widely consume the dried turnips. According to legend, during Dawood’s times, it is believed that the sundried turnips helped Kashmir survive a consuming famine.

Noon Chai or Pink salt tea is something that every Kashmiri starts his day with. The hot beverage is an important source of fluorine and is beneficial to both teeth and bones. The antioxidant-rich drink reduces the risk of cancer, diabetes, and heart disease. It beats the cold and also keeps the mind fresh and stimulated.

Favored by rich and poor alike, Harissa is a royal delicacy that has always accompanied the winter in Kashmir, ever since the Muslim proselytizers brought the dish along from Persia.

Although different varieties of Harissa are widely consumed around the globe, the Kashmiri Harissa is considered the finest that there is.

In Srinagar, especially in the streets of downtown, the morning gusts of the winter carry the wafts of vapor and mouthwatering odor erupting from the Harissa shops, and it builds a mood for a plate of rich and hot Harissa.

A plate of Harissa, tempered with oil, fried onions, and a few strands of Saffron, is a perfect match with a cold Kashmiri morning.

Some Harissa makers also bedeck their Harissa servings with Methi Maaz (a Lamb intestine and fenugreek dish) which renders extra taste and a fine aroma to the royal delicacy. At some joints, an occasional tiny Kebab also comes atop the Harissa servings.

According to Zareef Ahmad Zareef, the famous Kashmiri poet and Historian, "along with all the other meat-based dishes and delicacies, Harissa too was brought to Kashmir by Muslim proselytizers who traveled from Iran and Central-Asia to Kashmir on proselytizing missions between the 13th and 14th centuries."

Pheare is not a run-of-the-mill smoked fish that you can get at any fancy restaurant. It’s a traditional winter delicacy prepared in a particular method by only a few remaining households in Srinagar’s Tiploo Mohalla. Ever since the people learned how to fish in their crystal lakes and bubbling rivers, the Kashmiri's have been in love with its taste.

Since there are only four families left into the making of Pheare, their children’s efforts also ensure that the delicacy reaches the kitchens of thousands of households in Srinagar and far during the winters. The Pheare for its potency to warm the body and its unique taste is considered one of the best winter delicacies in Kashmir.

According to Fayaz Ahmad Tiploo, one of the last remaining people in the production of this traditional fish, “some people are so hooked to the taste of the Pheare that they ask their relatives in Srinagar to send them the fish to various Indian states and abroad.”

Hokhgaad is a small fish that is sun-dried in the open air. The fish is locally caught by the fishermen in Dal Lake and other lakes of the valley. Like many dried foods, Hokhgaad has a shelf life of several months. Hokhgaad is available in the market throughout the winter and is available till March and April.

“Hokhgaad is a source of protein and medicine for patients suffering from asthma. Since Hokhgaad is small dried fish, it's rich in protein and contains almost 200 calories per 100 grams,” Anees Qureshi, a fitness enthusiast said.

There are various varieties of Hokhgaad available in the market, including Razze Hokhgaad, Pachi Hokhgaad, and Niche Hokhgaad, based on the size and variety of the fish.

Since tomato is a fruit and not a vegetable, I have chosen to discuss It in a separate section. Ruwangan Hachi is dried and dehydrated tomatoes. Though dried tomatoes are part of multicultural cuisines around the world, Kashmiri Ruwangan Hachi has a distinct chewy and sour taste.

“When cooked, Ruwangan Hachi fills the home with a tangy fragrance that makes your mouth water,” Zahida, a Kashmiri housewife said.

“Ruwangan Hachi is also powdered to be used in curries or other dishes,” Zahida added.

There are also other fruits that people in Kashmir sundry during summer to consume through the winter. The most widely dried fruit is pear and Charar-i-Sharief town in Budgam is famous for producing this savory item. Some varieties of apples are also sun-dried and cooked like ordinary vegetables in Kashmir.

In Kashmir, hawkers roam around with cartful of these delicious nuts (especially during winter) and people never miss a chance to relish this tasty snack.

“Dried water chestnuts are believed to provide relief to those with backaches and urinary tract infections, and also diabetics,” Dr. Nusrat, a dietician based in Srinagar said.

Kehwa, a mild yellow tea brewed with green tea leaves, saffron, almonds, cardamom, sugar, and honey is a potion brew that people in Kashmir do not only consume for its taste during the winter but also for its immune building capacity and body warming property.

“Kehwa acts as an antioxidant in the body and builds up a good immune system. It is often considered a sort of medicine for cold, cough, and fever. Also beneficial in fighting headaches and migraine, Kehwa has always been the magical drink to relieve stress, improve concentration, eyesight and memory,” Dr. Nusrat said.

“Kehwa can also be that tasty beverage that naturally detoxes your system. Having a cup of Kehwa regularly will ensure that the toxins in your body are flushed out.

The semolina Halwa cooked with dry fruit, coconut, and Ghee is an easy and quick dessert item. The word Halwa has its origin in Arabic, meaning sweet. The Kashmiri Halwa is unique and has a peculiar taste of its own.

“The process of cooking starts with baking the semolina. Once the semolina is done you can add Ghee, some turmeric for the color, and the dry fruit and sugar,” Zahida added.

The dieticians believe that Kashmiri Halwa is a good source of carbohydrates and other essential elements that keep the human body healthy.