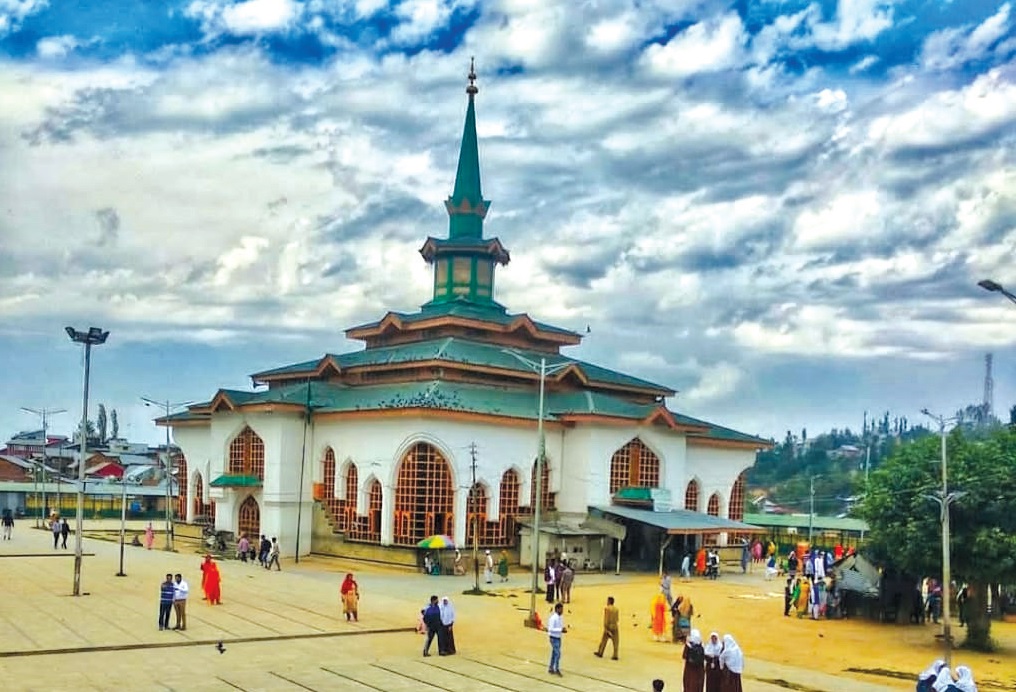 Last week, my family decided to go for a weekend trip to Pakerpora and Charar-e-Sharief shrines located in Budgam district in central Kashmir. I also had an opportunity to join the family.

It was cloudy day. We left our home in Narbal at 9 a.m and the temperature was moderate. I was excited to spend some time out of the home and explore new places.

First we decided to go Pakharpora shrine which is situated at a distance of about 15 kilometers from Yousmarg. We started our journey from Narbal via Budgam town. Pakharpora is reachable from Yousmarg, Srinagar, Pulwama and Chrar-e- Sharief by local transport.

As we crossed the huge traffic in Budgam town, it is followed with zigzag roads surrounded with green apple and almond orchards that mesmerize every traveller. I could hear chirping of birds in the morning which calmed my soul.

One can also see the green mountains that add beauty to the places. While travelling, iwitnessed many people and tourists on the way who stop at various locations and take pictures. The travellers often like to capture the village life in their cameras.

Another attraction along this route is the traditional simple lifestyle of people. Mostly I saw old pattern design houses, wooden stores where people store dry leaves and wood for winter use.

Traditional style houses, without fencing are closer to each other. When looking down from high-altitude roads, the residential houses look beautiful.

Interestingly, when one travels in any area of Budgam district one can see men as well women busy and doing their artistry work like Suzni work. The district is known for its handicraft industry in Kashmir including making of Kani Shawl.

I also saw women working in their agriculture fields and kitchen gardens. I observed everything very keenly.

As we were travelling, we stopped near a village called Tujan Dalwan and saw some boys who were cleaning harvested walnuts and they offered me fresh walnuts.

Finally, we reached Pakharpora shrine at 11 a.m. Pakharpora is famous for the shrine of Syed Balkhi (RA) who came to Kashmir in the beginning of 15th century. The shrine itself is a heritage site as the architectural structure is centuries old.

People from several areas of Kashmir visit the shrine to perform the ritual of ceremonial tonsuring of new born as people are staunch believers that these places hold special spiritual energy. And they want to have their children blessed by the Sufi saints.

World famous fresh and juicy apples are cultivated just in its backyard. A stroll outside the Pakharpora will make the visitor glimpse at the vast orchards with apple-laded trees in rows presenting a fascinating spectacle.

Pakharpora shrine attracts thousands of devotees each day from different parts of the valley. The place is famous for local bread and dry fruits.

At Pakharpora, locals have set up small shops and stalls where they sell different varieties of bakery items like kulcha and bekherkhani. Most of the visitors buy kulcha which is mostly consumed with kehwa or noon-chai.

After spending few hours, we left Pakharpora at 1 p.m. to travel towards Charar-e-Sharief shrine which is at a distance of 10 kilometres. The road to Charar-e-Sharief is very beautiful and crosses through huge residential areas.I saw many shepherds along with their livestock on the green and hilly mountains.

As we reached Charar-e-Sharief shrine, I along with my family went through the market and had lunch at a public park. I had never been to this place before and this was my first visit.

At the park there was another family that had their chef (waza) who was preparing wazwaan for them.

Charar-e-Sharief is one of Kashmir’s holiest and oldest shrines: The Shrine is dedicated to Sheikh Noor-ud-Din Noorani, also known as Nund Rishi and Alamdar-e Kashmir. This shrine is approximately 600 year old and the place is amazing and soothing.

After the death of Nund Rishi, he was laid to rest in Charartown. Later in 1446, the eighth sultan of the valley Zain-ul-Abidin, laid the foundation stone of the Charar-e-Sharief shrine at the burial site.

Over the time, the shrine was partially damaged. Later, Yakub Shah Chak repaired the damaged parts. In 19th century, an Afghan governor named Atta Mohammad Khan reconstructed the shrine. The shrine compound was engineered when Bakshi Ghulam Mohammad was serving as the prime minister of the erstwhile state of Jammu and Kashmir.

In 1979, the Jammu and Kashmir Academy of Art, Culture and Languages installed an epigraphic stone at the mazar (mausoleum) of Nund Rishi.

The shrine is decorated with traditional wood carving and architect work. There is also a wooden-style ladder upstairs where from one can view the whole shrine. The interior is too attractive.

At a distance from the shrine there is a quite busy market around. It consists of shops that sell toys for kids, clothes, women accessories etc. But the choice is limited and it is too expensive to buy anything.

Some artisans have also set up their shops and sell different productsmade of mud including utensils, decoration items etc which are mostly purchased by women and used them at home.

The beautiful earthen-decorated products attracted my attention there. These products include piggy bank for kids, kitchen utensils, flower vases etc.

At the shrine, there is long lawn divided into small sections where visitors take rest and also take lunch.

Your travel checklist for Charar-e Sharief should include the shrine around prayer hours, exploring the lanes and the family-owned workshops that have made kangri (firepot used in winter) for generations, and a walk around Budgam district countryside famous for its orchards and mustard fields.

We spent most of the time at the Charar-e-Sharief shrine. We left the place and moved back towards home at 9 p.m,crossing the zigzag village roads.

It was altogether a different experience. As we were travelling, I could see street lights, sky filled with stars and watching lightened houses from a distance was a beautiful feeling.

Both religious places are beautiful and must-visit places. It was a long and tiring day by the time we reached back to our home at 10 p.m. After the long drive in the evening, it was a day that I can never forget throughout my life.