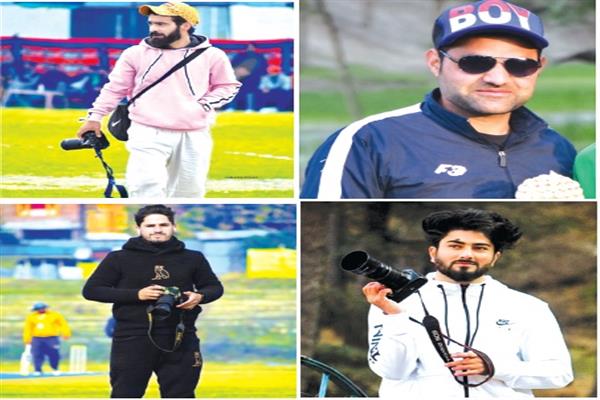 It is rightly said that pictures describe reality better than words. In Kashmir, photography has turned into a passion for many who love to capture life's moments as they happen. Some photographers prefer to capture wildlife, while some are documentary photographers who capture daily scenes of life, and some others prefer to do travel photography. Sporty photography, although an established genre in other parts of the world, hasn't found much of an audience in Kashmir. However, that is changing now with the emergence of new sports photographers in the valley.

One such big name is Shabir Ahmad Lone, popularly known as Lone Mahie, an ace sports photographer of Kashmir who has gained popularity on social media in recent years. Lone loves to capture cricket and football.

23-year-old Lone hails from the Kralpora area of north Kashmir’s Kupwara district and did his intermediate from Government Boys Higher Secondary Kralpora. He pursued his B.A. degree from Government Degree College Kupwara.

"I have been working as an official photographer for JKSports time and Cricket Ramhall for the last one and a half years. These two are the two big sports pages of the valley,” he says.

Lone says Patrick Eagar has inspired him to become a cricket photographer.

“I started photography in the 12th standard at the age of 18 years. My mother Zareefa and my younger brother Irfan supported me in chasing my passion,” he says.

Apart from cricket, he is also working to capture other sports like football.

For the last few years, he hasn't missed any cricket or football tournament in the valley.

Lone says his love for cricket surpasses his love for other games. His pictures have been doing rounds on social media as far as cricket photography is concerned.

Mahie has captured all the big stars of the valley with his lens. His photography skills have made him a favourite among cricket lovers of the valley.

From capturing local cricket to achieving fame in cricket photography, Lone has come a long way.

His hard work, passion, determination has played off and he believes that these can bring him success.

He has been awarded several trophies and certificates of appreciation both in football and cricket.

“I was awarded a Cricket Bat with my name and picture on it by Anthem Sports India recently,” he says.

Another cricket photographer of the Valley who has become an inspiration for budding photographers is Mudasir Rashid, known as Ess Mudasir.

30-year-old Mudasir is a self-taught photographer. He hails from the Palpora Pattan area of Baramulla district and has done his MA from IGNOU and Bachelors in Physical Education from Singhania University Rajasthan. Ess Mudasir's cricket photography has found many followers on social media.

He is considered a big name among cricket photographers in the valley and is known for his skills.

He started his sports photography journey in 2014 and has since captured many sports events in Kashmir.

From capturing local cricket with his lens to becoming a well-known name in cricket photography, Ess Mudasir has achieved a lot in a short span of time.

“I am very passionate about photography and I spend my days honing my skills,” he says.

Shahid Ahmad Khan is another emerging sports photographer of the valley.

Hailing from Kondabal Manasbal in central Kashmir’s district Ganderbal, Khan did his intermediate education from Government Higher Secondary Safapora and is currently pursuing Bachelor in Arts from GDC Ganderbal.

“As I would play cricket, I wanted to capture some moments in camera,” he says and added, “Watching photographs of sports personalities on Facebook and other social media prompted me to capture photos of local events.”

“I learnt photography, video shooting and editing from Youtube as there are Youtube channels which teaches one to learn skills in diverse fields,” he says.

“I started this page in January 2020 and in a short span of time the page gained 40,000 followers. This is a big appreciation for me from sports lovers,” he says.

Being a cricket lover, he wants to convert his hobby into a profession.

“I got inspired by my father, the late Ghulam Mohammad Khan, who also was interested in photography. Seeing my inclination towards photography, he bought me a digital camera,” he says.

He says after his father died he was going to quit photography but his mother Khalida Begum motivated him to continue chasing his passion.

“Besides my mother, cricket coach and famous cricketer Hilal Wani supported me,” he says.

“As my true passion lies in taking photos, I transitioned into portrait photography,” he says and adds, “I have spent most of the past five years shooting different events, nature's beauty, and sports activities like cricket, football, etc,” he says.

“As for my technical skills, I am proficient with a wide array of professional cameras, lighting gear and lenses,” he claims.

Shahid has a good command of photo editing, photoshop, and has developed wide shooting skills as well.

“I purchased a DSLR camera out of my little savings. I belong to an underprivileged family and I lost my father in my early teens," he says.

Bilal Sultan is another emerging sports photographer of the valley who has become a cricket photography sensation of north Kashmir.

23-year-old Sultan hails from the Wagub area of Sopore in north Kashmir’s Baramulla district. He received his intermediate education from Government Higher Secondary school Delina and is currently pursuing Bachelors in Mass Communication from GDC Baramulla.

“Umar Mohidin Mir, a local commentator known as lovely Umar encouraged me to opt for sports photography,” he says.

Over the past few months, this boy has taken leaps and bounds on major social media platforms, i.e. Facebook and Instagram as far as cricket photography is concerned.

He also has been awarded more than 15 trophies, and awards for his work.

He has become famous for his photoshoots in such a small period of time.

Sultan started his photography by clicking nature, product and portrait and wedding pictures but gradually shifted to covering sports events through his camera.

“I was not associated with cricket photography. I used to cover nature, products, portraits, wedding photography as well as modeling shoots, which proves that it had never been an overnight success for him," he said, adding, “I got inspired by Imad Click, a famous Vlogger in photography,” he says.

He says he was not associated with cricket photography.

It was Umar Mohi ud Din, known as Lovely Umar, the official commentator of the Kashmir Sports Watch (A Facebook Page) who motivated him to opt for photography in sports.

“Lovely Umar said to me that there is cricket fever going on throughout the valley and if you have talent and skills, I should try my luck in cricket photography,” he says.

“I was told that I would earn name and fame and I will have a bright future,” he says.

Bilal Sultan has a very keen eye for detail to ensure that all the elements within the photo - the lighting, the composition, the subject, and everything else is always up to the mark to convey the right vision and message.

“Apart from being a photographer, I am also a professional Photo Editor,” he claims.

“When I found difficulty in the photo or video shooting, I used to watch Youtube for further guidance,” he says.