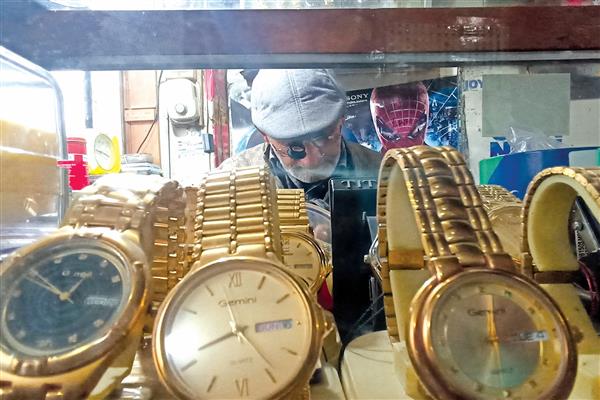 When a pilgrim asked for the best watch to a shopkeeper in Mecca and brought the specimen back to Kashmir, he was shocked to find that the watch was made in his home place Srinagar. Such is the glorious tale of HMT watches which had its best unit in Srinagar’s Zainakoot during the last quarter of 20th century.


At its peak, during 1983 to 1989, the factory at Srinagar produced 3500 to 4000 watches every day and employed nearly 1600 skilled and highly trained workers who worked in three shifts during the 24 hours of a day.

HMT Chinar, a subsidiary of HMT India, was the first public sector enterprise in Jammu and Kashmir. It was the second manufacturing unit of HMT watches in India outside Bangalore.  The area surrounding the factory, in around a 10 Square Kilometer radius, came to be recognized as HMT Srinagar. The then Government had allotted 400 Kanals of land at Srinagar’s Zainakoot area to the concerned authorities to establish a factory that would empower the people of Kashmir economically.

The factory was set up in 1971, soon after the India-Pakistan war, and after the Indira-Sheikh accord, the former prime minister herself inaugurated the unit in 1975. Initially, the daily production was 2500 to 3000, but later on, it increased to 3500 to 4000 units per day. Some popular brands made in Kashmir were HMT Chinar, HMT Nishat, HMT Shalimar, and HMT Kanval. The price range was between Rs. 114 to Rs. 1400.

“Earlier, around 16% of the spare parts came from Japan. But from 1985 onwards, all the parts were made locally and the brands made in Srinagar were given a Kashmiri identity to promote the valley,”  says Mohammad Ramzan, a former senior planner at the factory in Srinagar.

Ramzan adds further that when the Srinagar's manufacturing unit showed significant success, the managing body of the company came with the idea of establishing more units, and subsequently, units at Tumkur and Rani bagh were established.

The HMT had a collaboration with Japan’s Citizen. The Japanese technology and assistance significantly helped one of India’s earliest public sectors in mastering the ambiguous precision technology. According to Ramzan, the watchmaking in those days was not an ordinary task, there were nearly 300 operations required to finalize the watch and it would be then held for one week at the warehouse to be tested for faults. "In HMT watches, the quality was of the essence,” Ramzan adds.

“Back then, only two things were given in a dowry to the groom: HMT watch and a HERO bi-cycle. These were the most prized and sought-after things in those times,” says Azad Ahmad Zargar, owner of Time N Sound, the first and foremost distributor of HMT watches in Jammu and Kashmir.

Zargar further adds that the company ensured that the best possible service was available for its customers and therefore, all the service providers had to undergo a one-year training period in Bangalore before being allowed to repair the HMT watches.

Those days, Quartz watches were still a farfetched dream and only the mechanical watches adorned the wrists of men and women, and according to Zargar, these complicated pieces of machinery were particularly hard to mend.

Once every 24 hours, these fine mechanical specimens needed to be winded with sixteen turns at the crown. They were very low maintenance watches and since no cell went into them, there was also no threat posed to their machinery by the seepage of water.

“The current automatic and quartz watches are no match to those old mechanical watches. Watches in those times reflected taste and finery and they lasted decades. Nowadays, the majority of watches in the market are substandard; use and throw stuff,” says Ghulam Mohammad Marazzi, a retired magistrate who has been using a mechanical winding watch (HMT Chinar) for the past 32 years.

Zargar, being the third generation watch seller and owner of 117 years old shop ‘Time N Sound’ at Lal Chowk, is well aware of the craze that HMT watches carried in those days. He remembers that on October 23, 1983, when a small batch of 1000 watches had arrived and he put out a banner announcing the sale of HMT watches when he arrived at his shop in the morning, the queuing customers outside his shop extended to the Palladium Cinema.

“Since the demand was often high, the supply was low. The watches were often sold in the black market at a much higher price due to the unavailability of product,” Zargar adds.

Unfortunately, this golden period of the HMT watches couldn’t last long. Like all good and great things, HMT too encountered a fall.

The fall began when the then executive manager of HMT, I.K.Amita, had a  little altercation with the then Industrial minister, and he left the job at HMT as its head. Amita was considered the godfather of watchmaking in India and he had pioneered watchmaking in India. Subsequently, after he resigned from HMT, he was approached by the industrialist Ratan Tata and together they launched another watch brand namely Titan.

According to timekeepers, in 1983, when the Titan was launched, the brand conquered nearly 65 percent of the market share at the pace of a bullet in only a few years.

I.K.Amita’s desertion also instigated the exodus of talent from HMT to Titan, and this became another reason why the company went bankrupt around the 2000s.
In Kashmir, the second blow followed when the manager of the factory, H.L. Khera was kidnapped and killed by the militants in 1989, and subsequently, the pandit migration from Kashmir valley left the factory with only half the workforce.

“When the Kashmiri pandits, who comprised half of the skilled workforce, migrated to Jammu and elsewhere at the onset of the militancy, the factory struggled hard to keep up with the production target. Nevertheless, the remaining workers showed a hardworking spirit and produced the due mark. Although this was the point that should have forced the manufacturing unit in Srinagar to close, we didn’t allow that. Later on, when the things at the highest level went awry, we couldn’t save the company,” a former employee of HMT Chinar said while speaking with Rising Kashmir.

The Jammu and Kashmir government also established a subsidiary of HMT Chinar at Bari Brahmana Jammu in 1990, for the upliftment of the migrated Kashmiri Pandits. By then, the desertion of I.K. Amita and the launch of Titan watches in the market had long pulled the rug from HMT’s feet, and the people had started to show a liking to Titan’s quartz watches.

In 2013, the HMT Chinar shut its Srinagar operation and the remaining 22 employees were offered a Golden Handshake and forced to retire prematurely.
Ramzan, a resident of Srinagar’s HMT area, who served as a senior planner for 38 years (1975-2013) at the factory says that such was the progress of HMT India, that during its golden years even the sweeper’s salary at the factory equaled the salary of a gazetted officer of those times. “I used to take the salary of a Tehsildar during those times,” Ramzan adds.

Ramzan now runs a small watch repairing shop outside what used to be the HMT factory at ZainaKoot and every day he repairs 10 to 15 HMT watches that the people are still wearing from those times.

“People in the military are still fond of HMT watches and lots of people approach me to buy the watches, but unfortunately, I have a small collection that I hold because of my passion for these glorious watches,” Ramzan adds.

Ramzan has a fair collection of HMT watches from those times and he treats them as a fortune.

The few winding mechanical watches that remain from that period are considered antiques and sold over the internet at mind-boggling prices. Buyers with fine taste and collectors’ passion consider these old shiny pieces of machinery as collectibles or artsy specimens.

According to Zargar, such is the craze of HMT watches still prevalent in certain circles that when a minister in cabinet heard that he has a collection of HMT watches, he flew from Delhi to Srinagar to get hold of a particular HMT watch called the HMT Sona. The 18-carat gold plated watch cost a meager amount of Rs. 154 during the days of its manufacture, but now it’s a small fortune in itself.

He says that watchmakers in Switzerland and Japan have now returned to producing winding watches and the pieces are particularly preferred by the high-society.

Zargar too gets 5 to 10 watches every day for repair and service, and according to him, every person treats his/her watch that is on average 30 years old, as his/her small treasure.

Referring to the HMT watches of the past as 'Gold', Zargar says that no Indian watch can compare to those mechanical watches of the past, and as a hero becomes a legend in death, HMT watches too have become a legacy that not only India but the timekeepers from all over the world would remember for a long time to come.