A glimpse of the Kashmir’s old traditional marriages 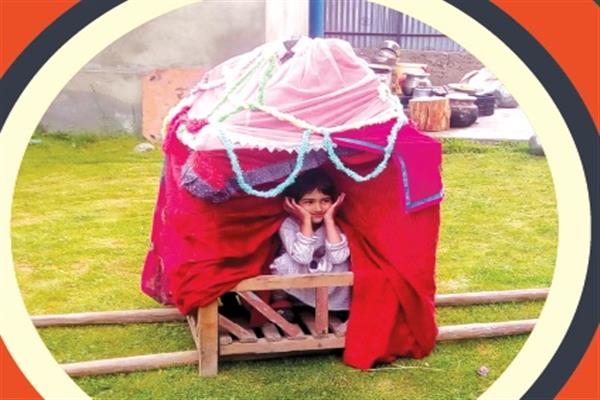 In 1940’s possession of mustard oil used as fuel for earthen lamps and presence of a heap of ashes in courtyard were sufficient indications to judge well being of ‘would be in-laws.’

Ghulam Mohammad Sofi, a senior resident of Pulwama, said that modern fuels and electricity were unavailable in Kashmir at that time and the people would go to nearby forests for collecting fire- wood.

“The fire-wood was used for making flambeau locally named as Lashe. The Lashe were used for lightening on marriage ceremony,” he said, adding that the cooks were paid rupees two to three for making a feast of few dishes in earthen pots.

For wedding dresses the bridegroom would get a pair of pheran, a shirt and a kerchief. Around 30 people would accompany a bridegroom to his bride’s house riding on horses, he narrated.

The bride would arrive into her new house in a Zanpaan (palanquin), also known as Dol-e.Four people were hired for pulling bride’s Dol-e. The pall bearers were named as Dol-e Kaaer.

“The pall bearers would be arranged by groom’s family and they would walk to bride’s house ahead of others to ensure that they would not lag behind those riding on horses,” he said, adding that they would carry a plate of food for long distances. The food was served in the way.

Sofi said that during his childhood such marriages were a usual sight in Kashmir. Over the time as modern means of communication were developed and socio –economic conditions of people improved drastically, the tradition of Dol-e- Khander (Marriage in which bride is carried on palanquin) and Guer Mahraaz (Marriage in which bridegroom is carried on a horse) started fading away.

However, in peripheral regions of Kashmir such marriages are still witnessed, though infrequently. Sangerwani is one such far flung village in South Kashmir’s Pulwama district where this centuries old tradition of Guer Mahraaz and Dol-e- Khandar is seen occasionally.

The village is around 30 kilometers from summer capital Srinagar. Majority of residents here belong to Gujjar community of Kashmiri Muslims and the habitation is scattered on huge area because of hilly terrain. By all parameters this will be described as a backward village despite standard of living of villagers depicting significant improvements.

Irshad Ahmad Cheche, a young man from Cheche Mohalla of Sangerwani villagesaid that he married a girl named Parveena Akhter of the same village a couple of years ago. His was a Dol-e-Khandar.  He was a Guer Mahraaz and his bride was a Dol-e-Mahrean which means that she arrived into her in laws’ house in a palanquin.

He recalled that a number of people had travelled to Sangerwani to have a glimpse of his marriage solemnized in a traditional way.

Azaad Ahmad Wani, a resident from a quite distant village, Newa, had turned up at his marriage. He was driven by his curiosity to witness such a marriage once in his life time.

Dol-e is three feet high and three feet wide box like structure made up of finished wood. A rectangular plank of wood fastened on two finished logs serves as base; a vertical casing of iron ropes encloses a small room like space which accommodates a bride. This space has an opening on one side which functions as a door. The casing is covered with a red coloured cloth and the base with a blanket.

A senior resident of Sangerwani, Haji Mohammad Hussainsaid that the villagers had been practicing these traditional marriages from their forefather’s time.

He added that for their predecessors it was a compulsion to arrange a dol-e for bride and a horse for groom because they had no motorable roads.

“Today we have a nicely blacktopped road connecting our village to district headquarters,” he said, adding the villagers here still prefer horse and Dol-e for such marriages where the bridegroom has to travel to short distance.

Villagers who have humble backgrounds also prefer Dol-e and horse for solemnizing marriages of their wards.

In Sangerwani village a number of carpenters used to make palanquins. However, most of the aged senior carpenters who had mastery in this trade passed away.

These days only a couple of carpenters make them for their customers which include Ghulam Mohammad Deedad and Javid Ahmad Gorsi.

Javid, 28, has inherited Dol-e making from his father, Abdur Rehman Gorsi, who had mastery in this trade.

He said he has made around 8 palanquins so far, the latest one was made in February of this year. It takes him a full day for making a Dol-e.

“I use Qiro wood for making a Dol-e because of its durability and nice finish,” he said, adding that a cost of rupees 3000 is incurred for making a perfectly designed Dol-e.

Earlier carpenters in Sangerwani would make a decent income from Dol-e making when they were in high demand but not now.

“I don’t charge any amount for making a Dol-e,” Javid said, adding he makes palanquins for villagers free of cost.

The last Dol-e he made has been donated to a local mosque. Villagers borrow the Dol-e from members representing management committee of the village mosque.

“Villagers make a voluntarily donation towards the mosque for borrowing the Dol-e,” Javid said, adding that his Dol-e is a meek source of income for the village mosque.

Another village Ghulam Mohammad Teedwa, a government employee working in forest department, has kept a nicely designed Dol-e at his house for lending to villagers free of cost.

He said that he was made to have this traditional piece of carriage available at his house after a rich villager denied a Dol-e to his poor neighbour.

Mohammad Hussain Cheche, another villager of Sangerwani told that it is the family of bridegroom who has to arrange the Dole.The Dol-e is dispatched to bride’s house ahead of bridegroom’s arrival.Tradition has it that anybody can shoulder the Dol-e but favours only close relatives.

The villagers narrated that one of the most striking peculiarity of traditional marriages is male signing.“Only males accompany a bridegroom to his in-laws’ house, singing all the way till they reach near the destination.”