A girl who left home to achieve her goals 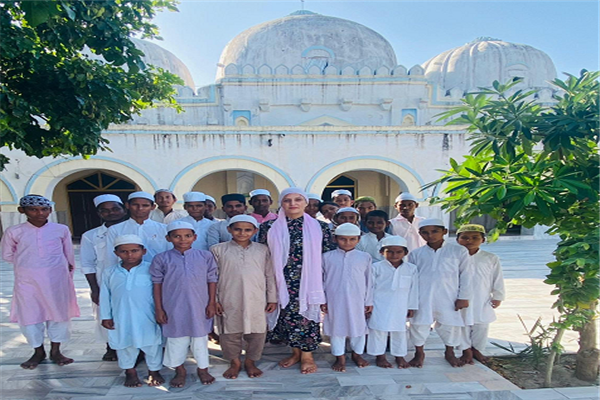 With the world on one side and her goals on the other, she left her home, leaving a letter for her dad. She boarded a bus and reached Nizam –ud-din Aulia. After spending a night there, the next morning she woke up as a new person who is determined to achieve her goals.

Facing odds, struggles and fighting for her rights, Dr. Ridwana Sanam from Kashmir is a renowned name in the field of physiotherapy.

A physiotherapist, entrepreneur, motivational speaker, Managing Director of KRV Healthcare and Physiotherapy Private Limited and also a chairperson of KRV Foundations, Dr. Ridwana is more than this.

Bearing a smile on her face and a positive attitude to live life, she has taken the field of physiotherapy in India to the next level when it was a lesser known profession.

Among the long list of awards received by her, she was awarded as Women of Substance by Dr. APJ Abdul Kalam Azad, the former President of India and best physiotherapist award in India by the actress, Shilpa Shetty Kundra. Her purpose was to create a path for others

Born in a small village of Kullar of the beautiful tourist spot Pahalgam, she was always treated and nurtured like a boy. Wearing clothes and making hair like boys do, she was fondly called ‘Rid Bhaya.’

After passing her senior secondary examinations, her parents wanted her to be a doctor or an engineer but her interest was in body fitness. Due to the unavailability of physiotherapy colleges in Jammu and Kashmir, she wanted to move outside to pursue her career in Physiotherapy but her parents refused and told her, ‘No. You can’t go because you are a girl.’

She said, “I was treated like a boy till then and when I had an option to go out for studies, I suddenly became a girl for them. My father had a view that ultimately you have to get married then why to face the struggle. Parents always find a nearby educational institution for girls but when it comes to boys, they find the best one. Education is education, it should not be about gender.”

Her father initially didn’t agree to her demand and Dr. Ridwana remained firm to her goal.

“No girl had gone out of Kashmir in my family before but I wanted to create a path where girls are freely allowed to go out to pursue studies,” she added.

Finally she went to Karnataka and completed her bachelors in Physiotherapy (BPT). After doing an internship in one of the government hospitals of Delhi, she had to face another challenge.

She said, “When I came back home, nobody asked for my plans. My father told me that I should do a job in Army hospital Jammu and further open a clinic or a hospital under his name as he was a well-known person, which would get me a good rush of people. It hit me hard and I thought, has Allah given Rizq (sustenance) to male only?”

She rejected the offer and made them understand that she wanted to create a brand and want to provide employment.

“My parents didn’t understand and I think they were right at their place because they didn’t have much knowledge about it but as children, we should take smart decisions and motivate them,” she said.

Her intuition was saying that she is meant for more than a government job. Her keen interest was upgrading the industry of physiotherapy in India. Taking it to the corporate level, creating more awareness and providing training and jobs were some of his goals.

“There was no government policy for physiotherapy back then, not even in the corporate industry. It was taken as a very charitable profession but abroad, it was a very demandable and highly respectable profession. It was in the sports field but the industry was not upgraded. I thought that it is a huge opportunity for me to do something and give recognition to the physiotherapists,” she said.

Knowing that she won’t be able to fulfill her dreams in the state, she left a letter for her dad and went to Faridabad to start her journey on her own terms. She took shelter in Hazrat Nizamuddin Auliha at night.

“In morning, I woke up as a different person- confident and satisfied. I had 25,000 rupees with me and I called one of my batchmates from Faridabad who came up with an idea of opening a physiotherapy clinic,” she said.

They took equipment on rent and opened a small clinic KRV physiotherapy in 2007 - two bedded and one consultation room.

There was support from some people but some started demoralizing her but she was satisfied that she has started the first step to achieve her goal.

Having earned a good name in Faridabad, people from other states started visiting her for treatment.

“I started giving employment to people. I needed assistants so I decided to get girls who are 18 years plus. I got orphan girls from NGOs and provided jobs to them.  I created jobs for physiotherapy,” she said.

In 2011, she moved to Gurgaon and set up a private limited company- KRV Healthcare and Physiotherapy Private Limited, a corporate office in Delhi and clinics at other places.

“The treatment protocols or standard operating model, research and development is an asset and can be replicated. The franchise model was one of the options for the brand. We focused on preventive management and introduced a separate division of products and accessories like sprays, belts etc. The people who are paralytic or can’t come to the center, we provide them home service,” she said.

Besides this, she also imparted skills and training to young people. The girls, graduate or senior secondary pass outs, were provided technical training.

In 2013, on the suggestion of APJ Abdul Kalam, she founded KRV Foundation which helps the needy and unemployed youth and the orphans of various NGOs by providing training and employment to them.

“We do projects of our own. 70% of my personal income and 20% of the income we get from the company goes to the charity where we are able to help people in every possible way,” she said.

Back in Kashmir, in 2021, she has constructed a madrassa for girls in Khiram. “100 girls in morning and 100 in evening recite quran there in a safe environment. I have told them to do Diqr because it opens you up for knowledge and recites 100 names of Allah and uses it in daily life which has been my strength,” she said.

She was also chairman of the PHD chamber of women empowerment. Provided entrepreneurship training in EDI Srinagar and Jammu, she has been to various girl colleges and universities for thought transformation of girls with her motivational speeches.

“Girls really had an impact on my speech. If the life of a single girl changes, it’s much for me. There are many entrepreneurs running their clinics who were trained by me. Women are already powerful. They just have to unleash their power and one just has to be the torchbearer,” she said.

Recently, she has distributed food items in Kashmir and has helped widows and orphans.

In Jammu, she has provided training to principals, professors and teachers of RAMSA department, where she talked about professional hazards and talked about prevention.

Apart from professional duties, she gives enough time to her interests. Horse riding, cycling, playing Golf and music are some of her interests.

She said, “I am a horse lover, horse riding is my passion and hobby and I participate in races. One of my future plans is to participate at the national level. Apart from that, I also play golf as it is a mind game. It helps my mind to stay focused.”

She wants women of Pahalgam to go for horse riding. “Every household has a horse there. Like boys and men, girls can also be a part of it and contribute to their family,” she said.

Talking about the health of women, she said women should take care of their health. “Women should have a check on vitamin D3, B12 and calcium. Try to keep hemoglobin normal. Take exercises. Cycling is also essential. Fitness is important. For a successful life, one has to be physically fit too,” she said.

She further said, “We should take right decisions and keep emotional decisions for true relationships. We should invest emotions in the right direction and see who deserves our emotions. When it comes to career, goal, reputation, we have to make a lot of sacrifices, we have to keep emotions aside and use the intelligence given by Allah which is a brain. We should always be in consciousness.”