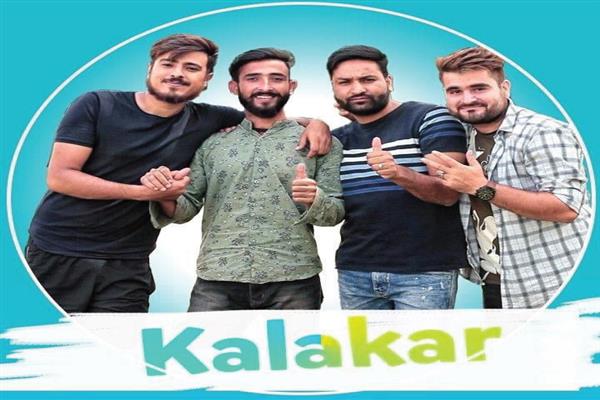 In the age of content creators, where several people present their talent and creativity through social media, Mudasir Farooq is one such content creator andsocial media influencers from Kashmir valley who presents social issues with infotainment.

Hailing from Sopore in north Kashmir, hehas never dreamt of becoming a social media sensation. He is running a page with the name of Kashur Kalakaar where he uploads his content and receiving praises from people.

After completing studies in Mass communication and journalism from Guru Naanak Dev University in Amritsar, 29-year-old Mudasir Farooq was selected in US based Multinational photo and video editing company - Pixopal as a project Manager in Pune in 2016.

In 2018 when he visited Kashmir for vacation, some incident happened at barber shop which prompted him to make videos and upload it on social media.

Recalling the incident at barber shop, he said,“two persons screamed at each other while discussing a cricket match and the people thought they will never talk to each other because of the exchange of indecent words. But after few minutes, a funny video played on phone by another person in the shop made every one laugh and they started talking again, surprising everyone.”

“I felt that there is some positive result of this funny video content and I understood comedy is very powerful tool.This event inspired me to create content on social media,” he said

After this incident, Farooq started researching about the various aspects of content creation. In 2018 heuploaded his first video content on Facebook for which he received 100k views which encouraged him to continue this and the journey of content creation began for him.

“Later in March 2019 , I started uploading video content on YouTube and now I am active on both the social networking sites,” he said adding, “I have around79 million view of my videos on Facebook and around 51 million views on YouTube till date.”

“For a drug awareness campaign we sponsored one local cricket team from Sopore named 11 willows. The main focus is to more people indulge in sports” he said.

Farooq says that giving some message through comedy is an art and now they only focus on discussion of social issues.

He says that those who want to become content creators should learn the techniques first and then only start uploading content on internet.

About his upcoming videos he said “I have written 4 web series I will release soon when I feel the audience is ready. I have written web series on College life, Drugs and other topics. It will be the long format web series.”

When asked about his favourite YouTuber he said “Salil jamdhar is my favourite whom I follow the most because his way of presentation is different and full of creativity.”

The equipment Farooq uses while making the video is the Canon 5d camera with 24-105 and 50mm lens, Gimbal, rig, tripod and monopod Dual-channel wireless mic Croma key and with lights, stand reflector, diffuser and other.

While sharing his struggle, he said that no one helped him in the beginning of his content creation journey.

“Everybody said you are educated, why are you taking this initiative. I faced hardship regarding my initiative but despite all these, I continued. Now, those who discouraged me are waiting for my new content eagerly,” he said.

Now, Mudasir uploads around 40 videos in a month and “I am working all the time since 15 October because of the love I received from people”.

Because of the consistency of working 40 videos per month some people of MX Player want to approach us.

“Maybe, soon we will working on MX Player OTT if we get the permission, then we shift our content on this platform,” he said

Giving advice to those who aspire to be content creators like him, he said, “Don’t be afraid of anything if you want to do something in life.Go ahead but never come in a rush.First, learn the things then you will be mastered in your profession with time.”

Content creation has made Farooq a different person who never had thought that he will be in this profession.Sharing the college incident, he said,“my teacher assigned me a documentary and I couldn’t complete because I was a shy person but now today I am making 40 videos in a month.The only thing that didn’t change is my video editing”.

In his message to the viewers, he says “Keep supporting and watching us because, with the help of your support, we focus on making more videos.”

He thankshis team members Junaid Shah, Showkat Parvaiz, Aatif Kaboo and Saqib Tota. “Without their support, I would have reached this level,” he concludes.