A Bridge Too Far: The Gartang Gali Bridge 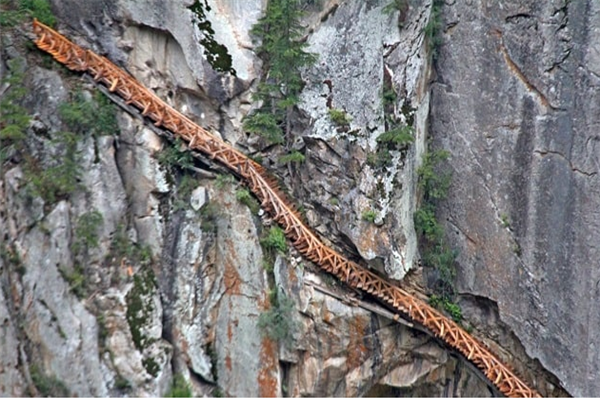 One of the most receptive areas of humans, the mind can be limitless in its experience and also stretchable in its extremities. When exposed to a myriad of situations, sights etc it adapts wonderfully leaving no trail of rigidity in its wake. The best part of human mind is that it cannot go back to its old dimensions when exposed to or stretched to new experiences as quoted above by famous American jurist Mr Oliver Wendell Holmes. Travel is one such experience which opens up every cockle of a human’s mind.If topped up by travel to an exotic place the human mind can be wonderful repository of knowledge for futuregenerations to imbibe. Armed forces of the country by default have a built in system in the nature of their work to take its members to such far off places which very often is beyond the realm of an ordinary citizen.

One such foray into the faraway lands of Uttrakhand saw me too in the early 90s at a place known as Nelong valley in district Uttarkashi. In fact last year a snippet of information on the national media detailing the great efforts by which Uttrakhand tourism board had resurrected the moribund and age old ( 150 years old) ‘Gartang Gali “ bridge caught my attention. It brought back a flood of memories in my mind when as a young captain in 1991 as part of a major reconnaissance patrol I traversed the terra firma which held this famous Gartang Gali Bridge. Kick starting on way from Harsil to eventually link up with another party from neighbouring Himachal Pradesh saw me traversing one of the most inhospitable terrains obtaining in our sub-continent. Tucked away at 11,000(eleven thousand ft) above the mean sea level (Msl) over the roaring “Jadh Ganga” river is this ancient high altitude bridge on the age old Indo-Tibetan trade route which is now a skywalk to boast of . After a hiatus of 59 years this ancient log bridge was thrown open to the public at large with bitter sweet memories of locals notwithstanding.

Located in the famous Nelong valley in Uttarkashi district of Uttrakhand near the Sino-Indian border, this wooden log bridge has been built by the sweat of the brow of hardy Peshawar Pathans of NWFP during the hey days of the ‘Great Game”. The building of the infrastructure all along the northern frontier of India to match up the threat so posed by the Czarist Russia ‘s appetite for expansionism down south was given a fillip during the reign of Lord Dalhousie followed closely by Lord Mayo in 1871.Two of the hardiest tribes of the sub-continent, the Pathans and the Bhutias of Indo-Tibetan stretch of land were liberally used by the British tochisel, thaw, and blow away /cut the Himalayas to carve out some of the most deadly roads/roadways of the world. The Gartang Gali bridge is one such masterpiece built during those times which even today brings the tourist’s heart to his/her mouth . The bridge saw its fortunes eclipse during and after the infamous 1962 Sino-Indian border war when it was put out of bounds for all souls till last year in a very selective manner. It is the same bridge through which the famous Austrian climber Heinrich Harrerhad also escaped to Tibet from British internment camp at Dehradun where he was kept during the 2 WW. He later recounted his daring escape in his book “Seven years in Tibet” which later became the basis of a Hollywood blockbuster movie by the same name starring none other than Brad Pitt as Harrer.

The Gartang Galli Bridge was mainly a thoroughfare for the main land traders and the tribal Bhutia community to trade with their Tibetan counterparts before 1962. At the time of its construction the Pathan labourers did a fantastic job by cutting into the granite stone on a vertical wall with the Jhad Ganga (Jhanvi) river flowing about 400 meters(1200 feet) below in a massive gorge .Till 2015 this famous bridge was open only for a very selective or restricted tourism purpose. The pathway was cut into the hard rock surface to accommodate fully laden yaks which went up and down this deadly route as a routine. The route greatly helped reduce both the travel time and the risk of loot during trade at that time. In fact this bridge is now famous as a moniker for the “Gartang Gali trek” which is still considered one of the world’s oldest trek routes. Situated at a distance of about 90 kilometers from Uttarkashi district headquarters this trek in ‘Gangotri national highway” was prepared by cutting steep and complex rocks near ‘Bharion Ghati” by laying iron rods topping it up with wooden logs.

Best time to visit this ancient trek route including the bridge is from May till October when the weather holds on to favour such trekking activities. Only this is a summer trek where a tourist gets a combination of both snow and greenery in abundance making it all the more spectacular. During the day time the temperature hovers around to a comfortable 10 to 15 degree C with night temperatures dipping to a sharp 5 C. The key point of Gartang Gali trek is to choose the correct timing of the year to savour the best of the journey. The Gartang Gali Bridge is a 136 meters long and 1.8 meters wide engineering marvel refurbished at a total cost of 64 lakhs by the PWD department of the Uttrakhand government. Forming part of ‘Gangotri national park” the Utrakhand government allows as on today only a batch of 10 to 15 tourists/trekkers at a time on this famous skywalk. The renovation of Gartang Gali Bridge was started in the right earnest in September 2020 and was completed in July 2021. Initially the labourers were tied with the safety ropes to help tide over high velocity winds and extremes of weather at the site for the renovation work. One could imagine the state of affairs way back in 1870s when the bridge was being built by the Pathans commandeered by the British to do their bidding.

Indian army on its part way Back in the 80s/90s had painted the whole mountain sides near the Gartang Gali with super human efforts slogans like --- Haathmeinsoti, chalchotichoti ( in mountains while climbing take a walking stick and climb with small steps) etc. There were many points along this route wherein the RVC (Remount veterinary corps) had established small caches of haystack and assorted items to help facilitate army patrols plodding with mules along this treacherous route. Certain important guidelines which have been issued by the Uttrakhand tourism board for the hikers have instructions like –no body is allowed to jump, run, dance or consume liquor etcnear the site as alsonot to peep down the Jadh Ganga gorge while crossing the bridge catches the attention of even the most casual of a trekker and sends a chill down the spine. There have been cases in the past when a careless hiker/tourist including army personnel have had a feeling of vertigo while approaching this site and falling to their death in the Jadh Ganga gorge .

All in all the Gartang Gali Bridge and trek is not for the faint hearted but at the same time it is a must see for all adventure lovers.The site offers one and all an enchanting view of the Nelong valley in all its splendor with the flora and fauna thrown in too as an added attraction. Not only this, but the area is also home to animals like blue sheep and snow leopards for a discerning eye. With 100% Deodar wood used in its construction, the Gartang Gali Bridge with its attachment to the hill sides is like a hanging bridge in the air swinging to the various hues as it unfolds at that height. A trekker has to register himself/herself at the registration point near the Bharion Ghati with an entry ticket pegged at rupees 150 for an Indian and rupees 600 for a foreigner before embarking on this arduous journey. Do’s and don’ts with attendant rules and regulations to be followed are displayed in prominent Hindi/English language sign boards which are unmistakable by their presence in this otherwise harsh and formidable terrain.A must visit place for the uninitiated since ‘Best view comes only after the hardest climb”.

(The writer is a Retired army officer and regular Contributor to RK. He can be contacted on his email…slalotra4729@gmail.com)