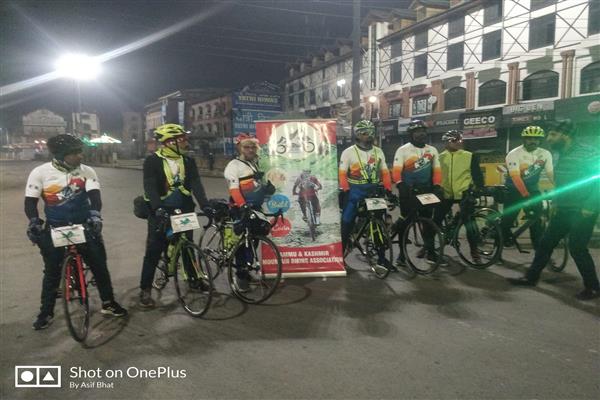 Srinagar, Dec 24: Aiming to spread awareness among the people about the importance of fitness, a team of eight Pune based Cyclists Friday set out for 4000 kilometer long Kashmir to Kanyakumari (K2K) under the theme “Save Environment Save Mankind" at historic Ghantaghar (Clock Tower) Lal Chowk.

President JK Mountain Biking Association (JKMBA) Riyaz Wani and Secretary JKMBA Asif Bhat flagged off this Unsupported cycling expedition at 6:24 AM morning from the Clock Tower and are expected to reach Udhampur in the first leg.

The team is aiming to complete this expedition in around 14 days by pedaling for around 10 to 15 hours daily.

While thanking JKMBA on the occasion for supporting the expedition, Team Leader Vijay Gavane said that they have named this expedition "Save Environment and Save Mankind. ''

“The sole purpose behind attempting this expedition is to spread awareness among the people of the country about the importance of fitness and nature care by riding through the longest route on the nation's map,” Vijay said and added “By our actions, we want to let people breathe fresh air, especially those who cannot exercise. It does make a difference when we make our actions larger than usual.”

Talking to Rising Kashmir President JKMBA, Riyaz Wani said the expedition is a historic movement in which a team of eight Cyclists is attempting to set a record.

“It is the longest distance coastal route, and is a western culture which has recently developed in India and in the valley as well,” he said and added, “Even our cyclists cover 250-300 kilometer distance in a single day on daily basis in a season which is a good indication for flourishing long-distance cycling culture in the valley.”