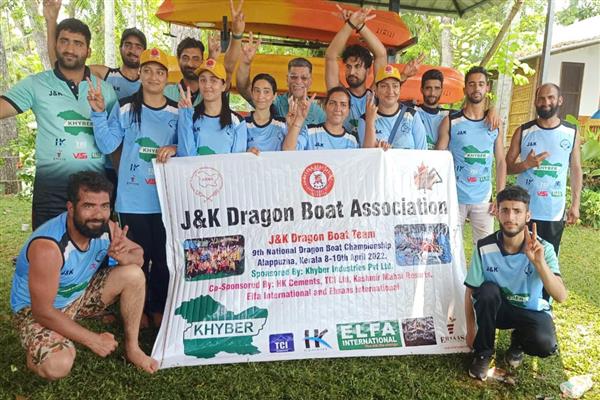 Two boys, three girls and one Coach from Kashmir have been shortlisted for participating in the National level Coaching Camp scheduled to be held at Maharashtra in June 2022 for their final selection in the 19th Asian Games 2022 Hangzhou China, in the Dragon Boat Event.

Dragon Boat Race is being organised by the Olympic Council of Asia, umbrella organisation of Asian Sports Federations in Association , with Asian Dragon Boat Federation from 23rd to 25th September 2022, of which the Dragon Boat India-Traditional Sports Federation (formerly Dragon Boat Federation of India) is a Permanent Member and the only legal body for conducting the said sports in India.
The shortlisting of the players was done during the recently concluded 9th National Dragon Boat Championship from 8th to 10th April 2022, for selecting the members of the Indian Team for their participation in the Asian Games, on the basis of professional skills. 16 Affiliated States and 02 unit teams, including J&K, had participated in the Championship where more than 300 Paddlers and 21 Officials had participated. The J&K team had won Bronze medal in the 200 meters (mixed) event.
Among the shortlisted players, for participation in the National Coaching Camp the two boys from Jammu and Kashmir are Wahid Hussain and Farzan Ahmad and three girls from J&K are Insha Bashir, Iqra Ayub and Ishrat Hamid.
Besides them, Coach Farooq Ahmad Bhat has been already been  selected as International Technical official, alongwith Tom Joseph from India.
The final selection of the Indian team comprising of 14 boys and 14 girls, will be done after completion of the National Coaching Camp.