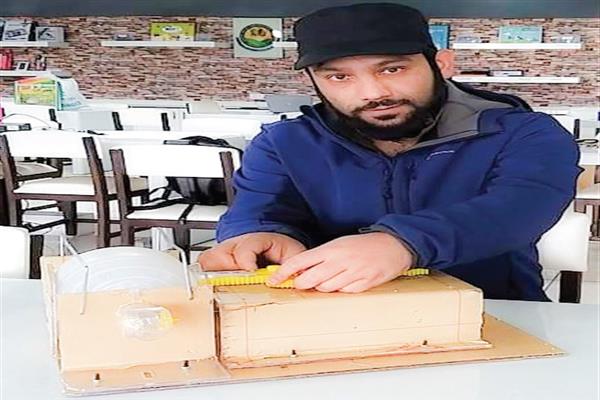 Having love for machines since childhood, Rouf-ul-Alam Bhat would often fiddle with electronic appliances. Curious to know about what is inside them and how they function, he would open television sets and fans. This curiosity and his ideation made him one of the best innovators of the valley.

Committed to serve society through innovations, Rouf is one of the senior innovators of the valley. He pursued PhD. in flying robotics and IOT, and is currently working as assistant professor in Department of Electronics Engineering, Institute of Technology, Zakura campus of University of Kashmir.

Like Ranchor, played by Aamir Khan in the bollywood movie 3-idiots, Rouf is also known as ‘Ranchor of Kashmir’ by his friends and peers.

In early years of childhood, Rouf would watch the famous singer, Noor Mohammad playing Rubab. Interested in knowing how melodious music is produced by Rubab, he made one on his own with strings of different lengths, wood pieces and an oil can. Later on in grade 6, he devised a sound system for his cycle that resonates while applying the brake, by using an ordinary doorbell and some batteries. He did this at a time when he didn’t even know the meaning of innovation or invention.

While pursuing M.Tech in Communications and Information Technology, from NIT Srinagar, he attended a seminar about the examination system. He said, “A person was explaining the whole process from setting of papers to the declaration of results. I was thinking if we could devise a machine with no manual intervention. While a person was speaking, my friend and I were making a design for such a machine which would make work easier and accurate.”

He further said, “The machine would scan the papers and would read the details of the students including the marks obtained by them. The data entry would be done by the machine itself. Also it would make the results too. The machine was called the Hardware Automator for Examination System also known as HAES.”

As he said most of the errors happen in data entry and the machine was better as it included no human intervention. The project however couldn’t get further push despite huge hard work of the innovators. Getting inspired by the renowned innovators, Mehraj-ud-Din Dar, the then Director IT, University of Kashmir and Ghulam Mohiddin Bhat, the then Director USIC University of Kashmir, he didn’t stop and continued working on his other projects.

The next innovation along with his team was the Automatic Fodder Feeding System for Cattle. A full set up for stable/cow shed was devised by making an interface between the stable and machine. It also has a dung convey which would collect the dung at a place and would dispose of it automatically. Later on, the project was sponsored under PRISM, a scheme for promoting innovations in individuals and startups.

Rouf believes that every innovation comes with a problem. “The idea came to me when we couldn’t manage a cow stable at our home. The idea can be used to bring about a milk revolution and to revive milk production at home so that we can get pure milk at home,” he said.

The ideation and designs of most of the projects are given by Rouf and the implementation is done in a team. Among the 10 patents filed by him, 2 are published by the Patent Authority of India. He has almost 150 innovations and has published various research papers.  He also has received awards from IIA, International Innovation Fair and Association of European Investors for his works.

Some of his major projects are Thought Controlled Room Automation. The device involves thought processing and machine learning concepts. It requires a cap fitted with a camera and a mind wave device and a person has to look upon and pay attention to an electronic gadget which he wants to operate. The project was actually made for paraplegic patients that make it easy to control things with thought processing.

“The cap has two things: sensor and camera. Sensor reads the wave of the mind. There is one wave of mind called attention. When a person looks at a thing, that wave of mind increases with the increase in attention. A camera based on artificial intelligence checks the things that are being looked at. The wireless cap then communicates with the system. It can happen through blinks or meditation as well,” he said.

Based on the same concept, the Thought Controlled Wheel chair was also invented. Another project which is at work is S Loon- Satellite Balloon filled with Helium. The balloon provides a network of communication during the time problems of communication occur like floods or earthquakes. The balloon is a weather balloon based system tied to a base station which can be sent high into the atmosphere upto a height of a few hundred meters. People who can see the balloon can communicate through it.

There are many other projects that Rouf has made along with his team of innovators. He said that the news from various newspapers helps him identify the problems and he immediately looks for a solution for a better social cause.

He further said based on the report, the laborers will be equipped with safety and will not fall prey to the things that can be avoided.   Anti-electrocution device for linemen was also designed where the lineman has control of the station himself so that he doesn’t have to depend on another person. “The device directly communicates with the station. We are working more on the project. Every now and then, we see line men electrocuting because of live wires,” he said.

For bone-chilling winters also, he has made projects to avoid the freezing of pipes and an ordinary fan that can work as a blower. However, Rouf believes that the inventions don’t reach the market due to the lack of angel investors.

“After preparing a prototype for the inventions, it is either kept on display or it is placed in a lab whose doors never open. There is a missing link between innovators and the market.  The lack of angel investors is there. Innovation is only good when one can see it in the market and make use of it in everyday life. Number of my inventions have gone wasted due to this missing link,” he commented.