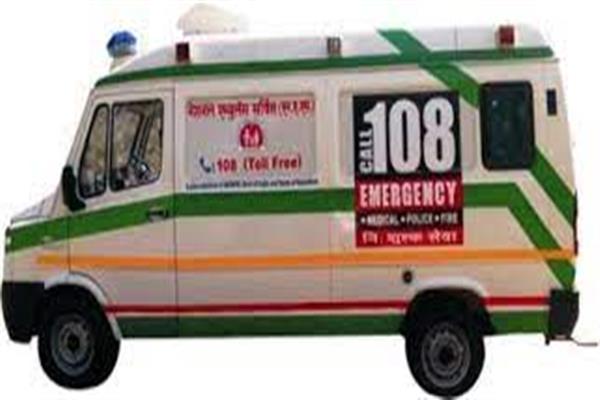 This month, on January 19, Reshma Jan (65), from Manigam area of north Kashmir's Kupwara district developed some medical complications at her home. She was in unbearable pain, yet her family, despite making all possible efforts, was not able to arrange a private vehicle to ferry her to the hospital for immediate treatment.

While her family members were clueless of how to help the patient, Reshma’s son Parvez Ahmad thought out and dialed "108"- a free telephone number of ambulance service. The service arrived in no time and the patient was rushed to Srinagar’s SMHS hospital for treatment.

“Before calling the ambulance, we were running here and there, but to no avail,” Parvez said.

Although, currently his mother is admitted at SMHS hospital, yet Parvez is happy that the help he sought came immediately. Expressing his gratitude, he said that he would never forget how quickly the ambulance service arrived.

"This is really a great initiative. We are so grateful to the authorities for providing such a service for people like us. Without it, many among us would die," said Parvez.

In Jammu and Kashmir, the 108 ambulance service provides integrated medical, emergency services since its inception in March 2020 and since then it has been saving numerous lives daily.

The Global Positioning System (GPS) fitted ambulances are equipped with life-saving equipment to handle the most complex medical emergencies.

In another such example, earlier, this month on January 6th, Jana Begum, a 70-year-old woman from Gongloosa area of Kupwara developed acute stomach pain.

Situated at a distance of 90 kms away from Srinagar, and roads blocked with heavy snowfall, her family had no clue of how they could take her to hospital.

“It was very difficult to reach the hospital. But thanks to the ambulance service that took our patient amid snow,” said Jana’s nephew Gulzar Ahmad.

The ambulances not only ferry patients from rural to tertiary care hospitals, but are also used to conduct deliveries of expecting mothers.

On December 21, last year, an expecting lady hailing from Chaturgul area of Kangan developed labor pain at her home. Due to snowfall, her family was helpless to take her to hospital.

However, later her family managed to take her to a nearby hospital amid snow. From there she was asked to go to Lal Ded maternity hospital Srinagar.

“She gave birth to the baby after a normal delivery in the ambulance,” said Haroon Ahmad, her husband.

The family is all praise for 108 ambulance service that came to their rescue. They say, but for the service they do not know what would have happened to mother and baby.

She is among hundreds of pregnant women who have availed the ambulance service in their crucial time.

“In 9 months, 48 deliveries were conducted at the scene, while 151 women have delivered babies in ambulances which are assisted by medical technicians at the spot,” he said.

“If we receive a call from a village, we manage nearby ambulances. There are often complicated cases and people call in late hours,” said Mushtaq.

In these ambulances, patients are also referred from rural to tertiary care hospitals.

“Once we get a call we check and search which ambulance is free and manage it accordingly,” he said.

Under the initiative, from March last year till December end, 143 ambulances had been made available. “We are planning to get more ambulances,” he said.

He said from March 2020 till December end, 39,734 emergencies were handled by the 108 ambulance service across J&K and Ladakh.

Mushtaq said during the Covid-19 pandemic, the service has also provided transportation to 3787 positive patients and 1639 suspected cases.

As Jammu and Kashmir is prone to road accidents and natural calamities, the ambulance service has been able to transport 1591 road traffic accident victims too.

“All ambulances are fully equipped. ALS ambulances have ventilators and other critical care facilities within,” he said adding manpower remains available 24/7.

The ALS ambulance has an emergency medical technician, who remains available and goes for on spot deliveries and provides treatment until the patient reaches hospital.

The ambulances are equipped with GPS trackers and are connected to a control room which is working in Jammu.

“In order to manage the calls from patients from distant places and to answer the emergency calls, the call centre works round the clock. An ambulance nearest or en-route is tracked and alerted to pick patients,” said Mushtaq.

At the centre, expert doctors remain available to give online advice to technicians that are available in these ambulances to handle the patients.

Interestingly, the health department has set up base locations across J&K at identified places including district and sub-district hospitals, CHCs and some selected PHCs.

The critical ambulance project was proposed way back in 2010, and has proved to be a game-changer in the delivery of public health care services to the patients.