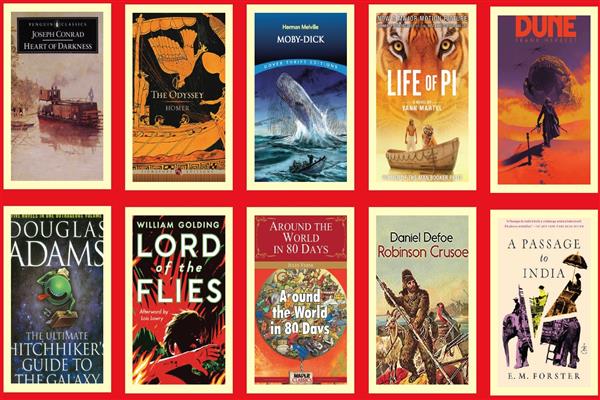 Adventure novels are a genre within a genre. Many classic novels are adventures in their own respect, while some are simply dramatic or lyrical. Adventure in a novel is a rare thing to find sometimes, as some stories can be weary and loaded and without that extra quotient of literary adventure. Throughout its history, novels have found their way to the hearts of readers if they had a good element of adventure novels. Adventure can be found both in a spy novel, crime fiction, or in mythology and fantasy. It is a sub-genre of literature.

In this Sunday Special edition, Rising Kashmir’s sub-editor Irfan Mehraj lists out some of the best adventure novels that one can read as the harsh period of winter is over in Kashmir. The novels in this list are picked from different genres and do not necessarily fit into a neat category of a single thematic genre.

1. Heart of Darkness by Joseph Conrad

Joseph Conrad is one of the greatest English language authors of the last century. He was a Polish-British writer who didn't know how to speak English and yet is widely hailed as a master stylist of English prose. His novel Heart of Darkness is a splendid adventure novel set in colonial Africa. It's an acclaimed novel published in 1899. The novel tells the story of Charles Marlow, whose mission is to leave the world of empire (the so-called civilized world) and sail to the African country of Congo. But what he encounters in the journey is an adventure that readers will find very intriguing and metaphorical. He is in the middle of the jungle and experiences the darkness of it and the darkness of the journey he has undertaken. The novel is considered one of the finest studies into how colonialism works. The film was also adapted to screen by American director Francis Ford Coppola and was a critical and commercial success.

2. The Odyssey by Homer

The Odyssey is an ancient Greek epic poem written by Homer. Nothing is more adventurous than this epic poem and the story that it recounts. The author tells the famous story of Odysseus in the epic Greek poem. The story begins from the moment when Troy falls to the journey that the hero must take to get home over ten years. The epic poem by Homer is one of the oldest ancient works of literature, which is still widely read by people all over the world. It is a work of literature that is taught in all schools and universities across the world. This is the greatest attribute to the timelessness of this work.

This novel by American novelist Herman Melville is regarded as one of the finest and greatest novels of the last century. It's a great sea novel and is an adventure at its finest. The novel tells the story of the voyage of Captain Ahab to hunt and kill the great white whale that rules the ocean's and haunts his mind. It was published in 1851 and today is hailed as the Great American novel of its time. It is a must-read for anyone who loves sea novel's or adventures at the sea.

4. Life of Pi by Yann Martel

Winner of the 2002 Booker Prize, the book by Yann Martel is an international best-seller. One of the most loved adventure novels of all time, the novel by Yann Martel revolves around a young boy who is surviving on a lifeboat in the middle of the Pacific Ocean. His only companion is a tiger. The novel is well regarded and loved for its themes and questions the meaning of life in all its complex ways. The novel has gained international fans and readers have drawn religious metaphors from it. The relationship between the man and a beast is examined in the novel and is a must-read novel of our times. The book has sold more than ten million copies worldwide. It has also been adapted into a Hollywood blockbuster.

Dune is an interstellar adventure book that tells the story of different noble houses who are battling to control the desert island Arrakis. Herbert's adventure novel Dune is the best-selling science fiction novel of all time. So much so, the entire Dune series is considered to be among the classic adventure novels of the genre. The idea of the novel came to Herbert when he was supposed to write a magazine article on sand dunes in the Oregon Dunes near Florence, Oregon, United States. As was his style, the author got very involved and ended up with more material than was needed for the magazine article. He became too involved and ended up with far more raw material than needed for an article. As luck would have it—Herbert never wrote the magazine article but instead the idea germinated into what later became Dune. The novel was published in 1965. It became an instant hit upon its publication and won several awards. Today, the Dune series has the distinction of being the single-most best selling science fiction of all time.

6. The Hitchhiker's Guide to the Galaxy by Douglas Adams

This novel by British writer Douglas Adams is still widely quoted in academia and literature. The novel tells a simple adventure story. When Earth is destroyed, only one man survives: Arthur Dent. He is picked up by Ford Prefect, an alien writer who’s working on an electronic book of the same name. What the readers will experience now is one of the splendid adventures of all time i.e. an adventure through the galaxy.

7. Lord of the Flies by William Golding

Considering its popularity as a novel, it will be surprising to many readers to know that Lord of the Flies is the author's debut novel published in 1954. The author William Golding won a Noble prize for literature later. The novel tells the story of a group of stranded schoolboys on one island. The schoolboys are marred by limited resources and have the challenge to govern themselves. What follows is a classic and page-turning adventure and many things will go wrong. The novel is considered one of the most popular ones written by William Golding and one of his critically acclaimed piece of literature.

8. Around the World in 80 Days by Jules Verne

The novel is an adventure novel by the French writer Jules Verne published in 1872. The novel tells the story of one Phileas Fogg and his valet who decided to use the time of 80 days to circumnavigate the world. If one had 80 days to spare, can one travel around the world? The novel tries to embark on the same adventure journey and the duo are blessed with 20,000 pounds and a brilliant adventure. It is regarded as a must-read adventure novel by the author.

One of the oldest novels on this list was published in 1719. It is basically a fictional travelogue and tells the story of a sailor named Robinson Crusoe. The original title of the novel is long and intriguing and perhaps reveals the heart of the story. The title is "The Life and Strange Surprizing Adventures of Robinson Crusoe, Of York, Mariner: Who lived Eight and Twenty Years, all alone in an uninhabited Island on the Coast of America, near the Mouth of the Great River of Oroonoko; Having been cast on Shore by Shipwreck, wherein all the Men perished but himself. With An Account how he was at last as strangely delivered by Pyrates." The novel by Defoe was a hit and is still widely read. The novel is considered one of the earliest realist fiction ever written.

This is a novel that won the author E.M. Forster many accolades and a little scorn as well in the post-colonial world. This is a typical novel of empire and one where the logic and meanings of the empire play out remarkably as well. The story takes place in 1920s India, which was part of the British Empire. It concerns the story of one Adela Quested and Mrs Moore, who are traveling to India in the 1920s. Adela is set to be engaged to Ronny Moore in Chandrapore, India. But things don't go as planned. The novel is set against the backdrop of Indian independence, and the novel is considered pre-eminent in the subject and themes that it deals with. There is a lot of adventure in the novel that will take readers to 1920s India, before Independence.