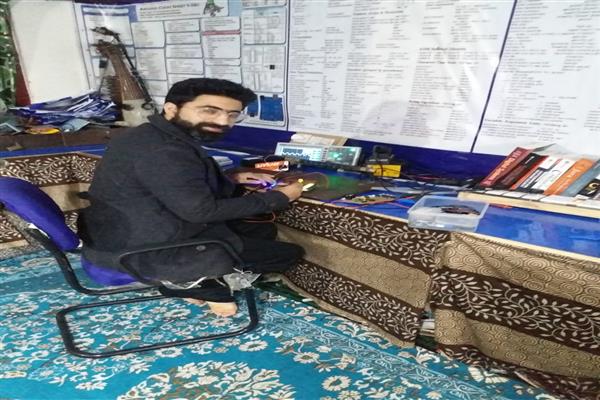 Diapers are one of the home essentials in a family with babies and kids. Primarily worn by infants and toddlers who are not toilet trained, they are also used by adults who suffer from incontinence and by paralytic patients who cannot move their body.

A young Kashmiri inventor, Jahangir Ahmad has developed a smart diaper that alerts when a baby or a person is going to pee.  He invented a wireless prototype diaper with a new technology useful for adults, babies and especially paralytic patients.

The diaper is smart enough to predict when the baby or a person is going to pee.

Jahangir’s smart diaper looks like other disposable diapers, but has a tiny thin devise with a processor, transmitter and sensors to detect when the wearer’s bladder is filling. When it determines that the body is ready to pass the urine, it activates an alarm in the watch that comes along with it. An alarm alerts the parents, caretakers of the babies and patients.

The three main sensors are Pressure sensor, Resistance and Capacitance sensor. The signals of three sensors are received by the processor which are then transferred to the transmitter. Finally the transmitter communicates with watch which lies with the mothers or caretakers.

“The resistance which means electrical conductivity and capacitance of the person’s body changes when urine is collected in the urinary bladder. The lower abdomen also develops a pressure when there is urine in the bladder. These three sensors are responsible for collecting the signals,” the young inventor says.

For Jahangir inventing the smart diaper was his second attempt at invention. “Earlier in 6th class I invented a floating turbine but then smart diaper was  a challenging and successful one.”

In 2014, he designed the smart diaper in Kashmir University’s I-Lab, while studying a B.tech course in electronics and communication at the varisty.

The Directorate of Technical Education at KU, who is also associated with Paediatric Rehabilitation Intelligent Systems Multidisciplinary (PRISM) lab, funded the inventor Rs 2.5 lakh. Then the diapers were tested on babies, patients and adults too and were found to be flexible, comfortable and safe.

The diaper comprising sensors — electromyography or EMG probes —can detect the electrical signals the bladder sends to the brain when it gets filled.

After concern of some parents that the tiny devise fixed with the diaper might have an impact on their children's health. He re-invented the technology in 2017 and replaced electromyography or EMG probes by a new safe tiny device.

“Babies going through the EMG all the time was a little problematic and a concern for some mothers. Then, I re-invented the technology so that their worries were laid to rest,” he says.

Jahangir has been inspired by his KU teacher Rouf ul Alam Bhat who has many patents to his name. “I wanted to invent different prototypes and I succeeded.”

He got the idea of smart diaper with wireless communication after a visit to his friend’s place where he saw his paralytic father struggling to move and answer to nature’s call.

After witnessing the scene and man’s difficulty, he along with his friends Aijaz Ahmad Bhat and Mansoor Ahmad Sofi, devised a technology that would help people like him communicate about the basic need to their caregivers without having to utter a word.

During the designing of the diaper, the young inventor explained to the doctor about the design and he told the young innovator that there is no such instrument that detects the problems of urinary bladder.

“After meeting the doctor. I was happy that I am doing something which is surprising and beneficial.  I fully dedicated my time to the innovation and completed it successfully,” he says.

The young inventor of smart diaper explains, “There is a detrusor muscle in the urinary bladder which detects the pressure in it. The newly-made tiny device fixed in the diaper detects the functionality of the muscle and send signals to the brain.”

He says that the detrusor muscle of a bladder generates an electrical signal which is received by brain and then it process that the person has an urge. “My invention was mainly to trap the signal and I did it.”

His multi functional device is not only for babies, paralytic patients but it is beneficial for adults as well.

“The diaper can also be washed after detaching the devised layer and can be reused after attaching it,” he says.

He also says that other diapers have polyvinyl chloride which have carcinogenic elements and is not good especially for the baby skin. Due to it babies often get rashes on their sensitive skin.

There was initially resistance to the innovation from manufacturers and parents because they were not aware the safety and flexibility of the smart diaper. “Initially some companies here showed little interest due to unawareness.”

But his innovation reached to countries like Japan. He got a business deal offer from a Japan based Unicharm company that manufactures disposable hygiene products and one medal of honor from inventorium of Purtugsia and Serbia.

Jahangir Ahmad has also started an innovation institute titled as "Kashovatics" in Kashmir.