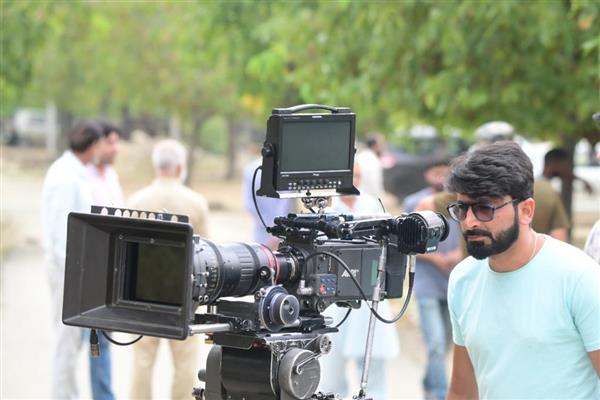 The 29-year-old freelance casting director from Kashmir, Umar Yousuf, has earned a lot of praise for his work due to his strenuous efforts and hard work. He started his journey as an artist from Srinagar and now has become a well known name among film circles.

The young director says he aims to promote and groom local talent. “"Our valley is blessed with natural talent and we must promote our stars with pride," he said.

Umar, who is popularly known as SK Sam in his circle of acquaintance, is a compassionate person who, driven by zeal, managed to achieve the undreamed-of success in the industry within a short span of eight years.

Talking to Rising Kashmir, Umar said he started his journey from Mumbai and involved himself solely in the casting line.

"I was told by my close friends that there is actually a lot of scope for people who have the knowledge of reading into people's capabilities as an actor.”

He said it actually opened the doors for him into the casting line. This way, his career started and he concentrated on the work on hand and slowly gained a lot of knowledge of the nuances that revolved around audition and its aftermath,

"I started my first assignment with ‘K Virus’ artist group in 2013 and later became its co-founder and after sometime I got a project as casting manager for the serial ‘Antra’ which featured on Life OK Channel. I did a Kashmiri special episode of the famous Indian serial ‘Balika Vadhu’," he said.

“In 2017,after a gap of two years, I came back to the film field by joining KJ Production (a line Production team) as an associate casting manager.”

“I did many projects with them including Laila Majnu, Notebook,  Shikara, The Family Man (web series extra), ads, songs etc," he said.

The actor said in 2020 he started working as a freelance casting director and now  has his own casting firm ‘Casting Kashmir’.

He has also worked with famous casting directors of Bollywood like Mukesh Chabra (MCCC), Anti-Casting Company, Casting Bay and many others.

Umar’s impeccable work and an eye for detail paved his way not only in massive Bollywood projects but also in numerous films and short movies.

"As a casting director, I did many projects but they have not been released yet. These projects include two Tollywood movies, few Bollywood project songs, ads and short movies," he added.

He said since childhood he was inclined towards the showbiz industry. He started his journey from the dream destination of Mumbai to look for an interesting career as many people literally struggled to get a heads-up in life in the hustle bustle of the metropolitan city.

"It is extremely hard to foray into the industry with no platform but it became possible with the support of my parents who always encouraged me," he said.

He said before his entry in the industry, he had to face a lot of rejections as he knew nothing about how the industry worked.

"We have no platform for young artists in Kashmir and nobody can show them the way into Bollywood," he said.

He said he wants to promote the young artists of Kashmir. "Performance is a key to success. After that, it is only hard work that will count. Audition is the best way through which one will get work. So my advice would be to never refuse to give auditions," he said.

Umar said youth of J&K are very much talented and they must remember that ‘where there is a will, there is a way’. “They should remain steadfast and pursue their goal with dedication and commitment,” he said.