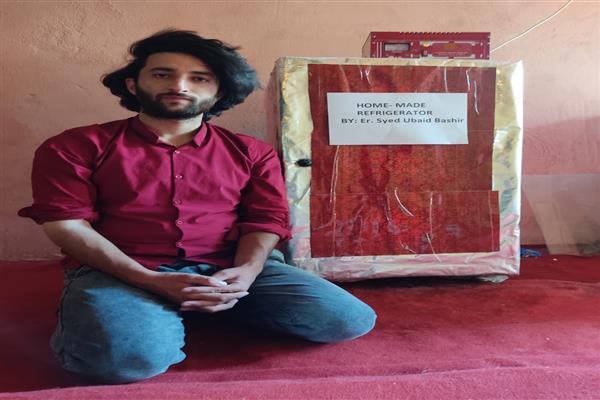 Syed Ubaid Bashir, a young engineer turned his necessity into an invention by changing a simple storage trunk into a refrigerator.

It was during hot days of Eid-ul-Adha when the need for refrigerator was felt in his home. “We had no cool place to store mutton. I went to the market to buy a refrigerator but they were very expensive. I came back home and worked on the making of a refrigerator,” he says.

Ubaid recorded a video of the making of a refrigerator and uploaded on his YouTube channel. “I received good response from people. Everyone appreciated me. Then I started making more and more videos,” he adds.

Hailing from Beerwah area of Budgam, Ubaid has done diploma in Electronics and Communication from Kashmir Government Polytechnics (KGP) and is now planning to pursue Bachelor in Technology course.

Since childhood, he had a passion to become an engineer. He says, “I was always interested in electronic appliances and machines and wanted to create something on my own. I would open any appliance and look for each and every wire and connections.”

Apart from a refrigerator, he has also made a remote-controlled door locking system, automatic sanitization tunnel and is currently working on many projects.

He says the project of automatic sanitization tunnel was part of his diploma course. “The tunnel is still functioning in KGP. A person gets inside the tunnel and gets automatically sanitized with chemicals.”

On his YouTube channel, he has uploaded many videos regarding repairing electrical appliances. “I have also made some videos on people’s demand like repairing of room heaters, electric blankets, rice cookers etc.,” says Ubaid.

Currently, Ubaid is working on many projects but is facing hardships due to financial constraints.

Preparing for his entrance examination of B.Tech, he starts his day at 7 in the morning and carries on with his studies till late in the night. “I am working hard day and night with an intention that on one day I will contribute to those who are not able to bear expenses of their studies. Also, I am thankful to my teachers of KGP who arranged extra classes for me,” he says.

“Youth should be optimistic. They should not give up on their dreams and feel defeated. They should never waste their life with drugs and engage themselves in productive things,” he adds.