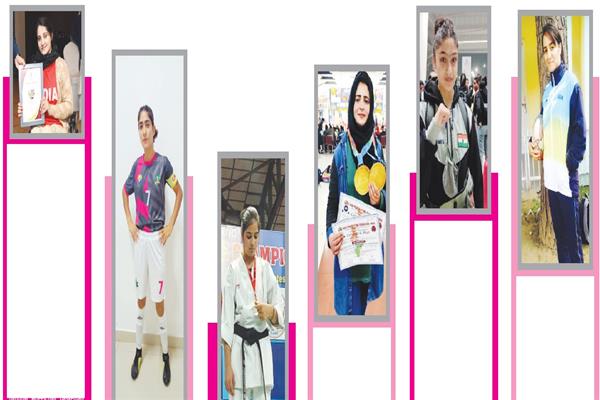 Kashmiri women sportspersons not only represented J&K at the national level but have brought laurels to the country at the international arenas as well. Rising Kashmir's Sports correspondent Yaqoob Ali files short profiles of some women sports stars from Kashmir on International women’s day.

She became an inspiration for differently-abled persons not only in the valley but across the globe despite facing various difficulties owing to an accident causing her to lose both limbs.

Despite that she made her name in the international arena by becoming the first Kashmiri women international wheelchair basketball player in Kashmir.

27-years-old Insha is from Beerwah village of central Kashmir’s Budgam district and is currently pursuing Masters in Social Work (MSW) from Delhi University.

The Beerwah girl is the current captain of the J&K wheelchair basketball women team and has been awarded by the sports minister of India, Kiran Rijiju, and the Jammu and Kashmir Sports Council for her achievements.

Though wheelchair-bound she could not forget her goals. From 2017 onwards she is continuously active in basketball and social activities.

She represented India in the USA in March 2019, and participated in the national championship in Mohali Punjab in 2019 while representing Jammu and Kashmir, as captain of the women’s team. The team reached the quarter-finals for the first time, courtesy Insha. For this Insha was declared player of the year in 2019.

The wheelchair-bound sportsperson has played national and represented Delhi at Tamil Nadu in 2018, besides participating in the national wheelchair basketball championship in 2017 held at Hyderabad.

She says that once you are determined enough to do something in life, the Almighty comes to your help, besides the support of the good people around you.

With willpower, one can see himself in a better position.

Insha has become a source of inspiration and example of endurance and endeavour for those who want to take their life's passion forward despite being wheelchair-bound or with other physical disabilities.

She believes, whatever she has achieved in life, can be achieved by anyone.

She seized every opportunity that came her way and set an example for differently-abled persons. Not only that she gave Ted talk, in Mangalore, where she was given a standing ovation by scores of people present, the majority of which were doctors from across India. Insha was called “Muniba Marazi of Kashmir'', a famous wheelchair motivational speaker who herself met with an accident and eventually turned into a motivational speaker.

She has recently written a chapter “Rising Higher than Disabilities” in “101 Unconventional Strategies” a book that is a best seller on Amazon.

Second, among four siblings, the journey of her success was full of challenges and obstacles which included her accident and depression.

There are many people in the world, physically disabled, and out of which there are people who despite being disabled move on in life and make their name. Insha, despite being wheelchair-bound, decided to emerge as a wheelchair basketball player.

She wants to work hard and make Kashmir and the country proud as she dreams to become an Olympian.

Hailing from Rambagh area of Central Kashmir’s Srinagar district, Nadiya Nighat started playing football at the age of 12 in 2007 while breaking the stereotype in the “conservative society.” However, initially her journey was not easy till she got recognition, but her hard work and firm determination made her family support her ambition.

Nighat eventually turned the tide on her side and even earned respect by setting an example for girls in the valley.

Initially, she played with boys as no girl was playing football then in Kashmir. She was once stopped from taking part in finals for being a girl.

She was even taunted and was told to refrain from playing with them; even sometimes the boys were also taunted for playing with her.

25-year old Nadiya is the first women football coach of the valley, who runs her own football academy named JJ7 and is currently playing in “DONBOSCO” a Kerala based professional club in the Kerala league.

She has also served in Lonestar Football Academy as assistant coach and in ‘Real Kashmir FA’ as coach.

She also started her football academy in 2015, training boys. After one year in 2016, her team was runner up in the Khelo Kashmir sports event. With the motive to train girls she opened her academy for girls in 2018.

A diehard fan of Ronaldo and Messi, Nighat wants to see Kashmiri children playing outside J&K. Believing that can hone up their football skills better and give them exposure to different levels of football besides wanting them to represent the country.

Her future plans are to make the J & K women team a better team not only in Jammu and Kashmir but in the entire country.

18-years-old Mehreen bagged this gold by defeating her opponent from Bhutan in the under 19 age category.

Mehreen fought her first battle with Bangladeshi opponent and fought her second fight against Nigerian opponent. More than 200 martial artists from different countries participated in this championship.

Banday started playing Karate at the age of 13, and since then, have played one international and five nationals and have won 5 golds and one silver medal.

She got inspiration for playing Karate from a hollywood movie 'Karate Kids. Her parents were supportive to her besides coach Faisal Nazir.

She has also broken the national record by lifting 130 kilograms in the deadlift in under 55 kg weight women category in championship.

Arifa lifted 130 kg weight in the deadlift and 47.5 kg in bench press in her final attempts (Raw) in the championship in which around 500 power-lifters from across India participated. organised by Raw Powerlifting Federation India.

Hailing from Kujjar village in central Kashmir’s Ganderbal district Arifa is pursuing her B. A degree from Government Degree College Ganderbal and has received her intermediate education from Girls Higher Secondary Ganderbal.

With these wins, she also qualified for the international Powerlifting championship scheduled to be held in Dubai, U.A.E. in April 2022.

Despite being from a lower-income family, Arifa continued to chase her dream from an early age and didn’t let her dreams die.

Arifa, fourth among her five siblings is a black belt in Sqay Martial Arts and is also known as the “Iron Lady” in her village.

She is also serving as a gym trainer at “Doctor Gym” at Behama, Ganderbal and has won several gold medals in different state and national championships in different games including Powerlifting, Sqay, Volleyball, And Cricket.

Bilal was interested in sports since her childhood and started to learn Sqay martial art professionally in 2012. She says coach Saleem Pathan played an important role in training her. Besides, she has bagged gold medals in various state and national championships.

Arifa has been an inspiration for many girls in the village. She is the only female who runs a gym center in Ganderbal and has received an outstanding response from the people. She trains numerous females in her village.

Arifa is aiming for a gold medal in the international powerlifting championship to be played in Dubai.  And is going through training from her coach Akhtar Wani, for which she is working hard.

She believes that there is a lot of potential in the youths of Kashmir but parents must support and allow their children to chase their dreams, especially girls.

The golden girl of Kashmir Sadia Tariq turned into an international champion earlier this month by bagging the gold medal in Moscow Wushu Stars championship held in Moscow, Russia.

Sadia achieved this feat while defeating her opponent from Russia in the final bout of the championship. She is also two times consecutive gold medalist in Junior National Wushu championships.

Sadia was the only Wushu player from J&K who took part in the championship among the 38 contingents of players which included 23 junior and 15 senior Wushu players from across India.

She has also secured Gold medal in the 20th Junior National Wushu Championship held at Lovely Professional University, Jalandhar, in which the J&K Wushu team stood third in the overall medal tally.

Sadia is one of the best to get the medal for the country and the J&K in the upcoming Youth Asian Games. The Sports Authority of India has accepted the recommendations of the Wushu Association of India to enroll best probables for the Youth Asian Games in the different National Central of Excellence.

She does not want to become a doctor or engineer, but rather wants to bag gold for country in the Olympics.

This little ‘wonder girl’ not only has made her parents proud but all the people across the country especially people of Jammu and Kashmir.

All the people from across the country lauded Sadia, daughter of Kashmir for bringing laurels to country which include Prime Minister of India, Narendi Modi, Lieutenant Governor J&K Manoj Sinha, Advisor to LG Farooq Khan, Former CM J&K Omer Abdullah etc besides other sports personalities for accomplishing such a feat in young age.

Sadia wants parents to support their wards in playing sports, especially girls. She gives credit for her success to her parents, especially father and her coaches.

Soliha Yousuf, was just in her sixteen when she decided to do an unusual thing to break the stereotype in the valley, she went for Rugby, a sport which requires physical as well as mental endurance.

Despite all odds she had accepted the challenge and went for her passion, Rugby.

Hailing from Rangapora, Ellahibagh, Srinagar, Soliha, 27 did her schooling from Green Valley Educational Institute, and then her B. Tech from Islamic University of Science and Technology (IUST) and pursued her M. Tech from Jamia Hamdard University.

The daughter of soil has brought many laurels to valley, by accomplishing various stages in the game and bagged several medals including Gold medal in 3rd National Snow Rugby 7’s Championship 2017 held at Gulmarg.

She is currently working as a coach and captain of Jammu and Kashmir Women's Rugby Team. Under her captaincy, the JK Rugby team has won a bronze medal at khelo india winter games, held at Gulmarg in March 2020.

She was also awarded the best player of the year 2010 by Jammu and Kashmir Rugby Association. Soliha has played 10 nationals, various district and state tournaments.

She was selected for World Rugby Level 1 refereeing and coaching course held in pune, March 2009.

She is working as a senior women's coach for Jammu and Kashmir Rugby and Rugby Development Officer (RDO) for India Rugby.

Soliha was lucky enough that she could get full support of her family. sShe considers family as her backbone as they have always supported her from the very beginning. Her parents never opposed her, though knowing it's a physical contact game, with a risk of getting injuries.

She credits her success to her mother as she believes wherever she stands, it is because of her family.

She has struggled a lot in her initial days. Where they didn't get much attention although they used to give a lot of effort but have now come a long way.

She believes now relatively things are better, however, the struggle is still on, as Kashmir is still a relatively conservative society.