Unleashing the power of knowledge 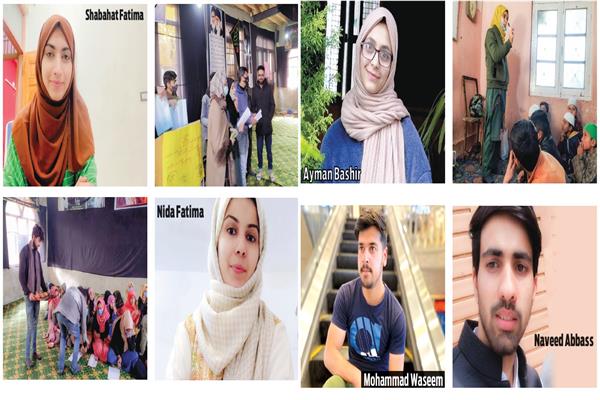 Every day while heading towards the place where they attend Persian classes, Nida Fatima and Shabahat Fatima passes through the area near Dal Lake and would see children playing. Soon they come to know that the area has less literacy rate and most of the children are dropped out of the school. Some of them go for work while some just loiter around.

Nida, an engineering student said, “People there were less exposed to education as compared to the other areas. We, being students, wanted to help them and we thought the best possible way to help them is to educate them.”

It was in the year 2018 when they established a library in the vicinity of Dal Lake in one of the rented rooms. The library named Imam-i-Mehdi library has a collection of books, references and notes catering various subjects for the students of 8th to 10th standard.

“I talked to my friends and they further talked to their friends and relatives and this is how we formed a network and collected some 300-400 books for the library,” she added.

Like any other library, the rule for students was to take a book and then get it back after reading. A database of students was also managed.

As the message spread, more people started to join the duo and the group today has 5 active members who work intensively to educate the kids. Ayman Bashir, Naveed Abbass and Mohammad Waseem from different fields joined the duo.

Ayman is pursuing studies in the field of architecture, Naveed is pursuing engineering and Mohammad is doing Bachelors in Business Administration.

The main focus of the group was to cater the students of 8th to 12th standard. Many career counseling sessions, talent hunt sessions and robotics workshops were organized for the children to get them exposed to the new world.

“These are the crucial years where a student comes to know what they have to do in future. The children were exposed to many things so that they can come to know what is happening around,” she said.

In talent hunt sessions, the students of class 8th to10th were given general aptitude papers comprising basic science and mathematics questions. The top students used to get prizes so that their confidence could be boosted up.

As the classes were switched to online mode due to Covid pandemic, the group took it as an opportunity to reach out to more students.

“We started making Whatsapp groups and zoom links and we also came up with an idea of building a website. We managed to build a website where we posted the best possible material for the kids. We kept e-books related to any subjects. We also kept some novels so it’s a full-fledged library,” she said

It took the group 3-4 months to work on the website. The website has video lectures too. The local tuition centers and renowned teachers were also consulted and their study material was also uploaded with their permission.

“When students search the lecturers on YouTube, they get a lot of stuff and often get confused about what to study so we have already got the best ones for them on the website. We have also given the credit to the creators who have created the content,” said Nida.

Nida who conducts the doubt clearing session for Maths and Science said that during the times of examinations, the group organizes multiple sessions frequently while during pre-exam, weekly sessions are held besides giving the students time to do self-study as well.

The group also connects the students with the resource persons and experts to interact and guide them.

“We act as a medium between the donor and the receiver. Like Ayman saw me working in a library and collecting books which intrigued her to join us, similarly many people are working with us remotely,” said Nida.

The journey has not been easy for them. Changing the mindset of locals of the area was one huge task.  “Initially the locals were like what wonders our kids will do but we didn’t force things on them, rather we involved the children as well as their parents in the learning process. They got to know that there is a need for education, redefining their thoughts and ideas,” she said.

Another objective of the team was to inculcate among children the feeling of giving to people.  “We people can’t reach every area where literacy is low.  We taught the children that they can further take the cause forward and help the people who are in need and the chain should go on,” she added.

The thought of helping others let the children donate their books too once they pass the exams.

“When I was a teenager, I used to think that money was important to help people. As I grew up, I realized that education is something that can change lives. In workshops, I interacted with the kids and came to know about their passion and will to learn. The time I spent with those kids is the best time of my life and when I am with those kids, I don’t count hours or days,” she said.

She feels content to know that when she will retire from all this, the library will be in safe hands.

Another member of the group, Shabahat Fatima said that her group is just a circle of responsible people who wanted to do something.

“In our group, everybody has a role to play and my part was motivating. I motivated students and parents to join the library. Everyone needs a triggering point. Things come when you have a plan and we work as per our plan,” she said.

Talking about the children, she said that the earlier children were far behind the modern times. “The area was near to National Institute of Technology Srinagar which is the hub of knowledge and those people don’t know about education. They were unaware of so many things,” she added.

The thing that she appreciated the most was the participation of female students. She said that during various sessions and workshops, the female students were seen in good numbers. Another fascinating thing to notice was that during the talent hunt sessions, the students performed well.

“Some kids do wonders when offered proper guidance. Apart from classes, they consult us through calls, if they need guidance or counseling regarding anything. We have a good network and we try to get their doubts cleared by our friends as well so we connect them with a number of people who are knowledgeable. Things take time to change and it’s been 4-5 years and things are changing,” she said.

Currently, Shabahat is pursuing clinical psychology in Lucknow and offline classes have been a blessing in disguise for her.

“Virtually we are with them all the time. Things should not stop. Once you start something and give people hope then you should keep moving. We should have a sense of responsibility that we have to do something. Whatever we possess, we have to give that,” she added.

Being students, the group considers that the only power they have is knowledge and are always up to unleash their power of knowledge.