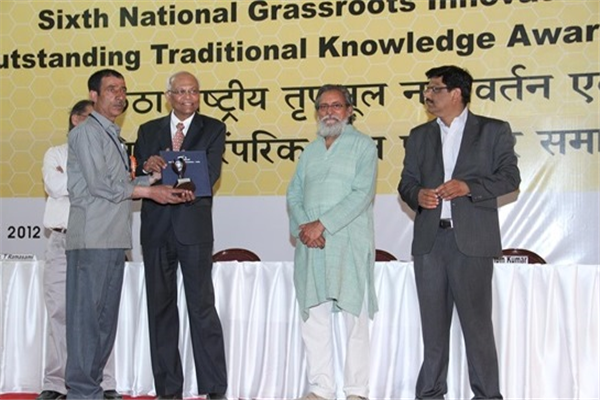 Ghulam Mohammad Sheikh, an innovator turned his necessity into an invention by designing a modified kerosene stove using pipes. He arranged pipes in such a way that there is no need for a fuel tank as the fuel is stored in these pipes.

He said that the modified stove provides higher thermal efficiency due to the preheating of kerosene which is stored in the pipes of the stove. Also it has less chances of explosion due to evenly distribution of pressure in large pipes.

Belonging to a humble family of Dooru in Anantnag, Sheikh’s father was a laborer. He has been spending life in extreme poverty and has lived in a tin shed for a long time.  Due to his poor financial conditions, he was unable to purchase a stove which gave him an idea to make one on his own.

He said, “I was not able to buy a stove for my home. We were living in poverty and our condition is not better even now. Stove is an important thing used at home. An idea stuck to my mind and I started working on that.”

Being a mechanic by profession, he had knowledge about machines which helped him in making a modified stove.

The kerosene in the modified stove is stored in the pipes that are doubled up as a stand which causes higher thermal efficiency due to preheating of kerosene.

He further said, “It’s a low cost and high efficiency stove so that people like me can afford it.”

He was scouted by National Innovation Foundation Cell-JK (NIF Cell-JK), Institute of Technology, University of Kashmir in the year 2007.

Sheikh was awarded by National Innovation Foundation-India (an autonomous body of department of science and technology Govt.of India) on its 6th Biennial National Grassroots Innovation Awards-2012, at Rashtrapati Bhawan New Delhi. The patent for  modified stove has been granted in 2021 vide patent number 367101.

He has also worked on Tea Harvesting Machine and the motor bicycle which can be used over the snow.

He said that during the days of snowfall in winters, the narrow lanes and alleys are usually deprived of snow clearance because big machines cannot reach there.

“I made a bicycle which can reach the narrow lanes and clear the snow there so that people don’t have to do this on their own,” he said.

Talking about the Tea Harvesting Machine, he said that the process of tea picking is done manually which is a very tedious job.

“With the tea harvesting machine, the work is done in less time and also the production value is very high,” he added.

Being an innovator, he feels that his ideas are getting wasted due to the shortage of equipment in making innovations and lack of money has made it even more difficult for him.

“Due to the unavailability of equipment in the village, I have to travel to other parts of Kashmir and sometimes I don’t even have money to travel.” he said.

He appealed to the government to come forward and make schemes for the upliftment of innovators.

“I had to give up many of my ideas because of the lack of resources and money. Government should think something about innovators. It’s something that takes time, money and effort. If innovators are provided with some help, their ideas can revolutionize the world,” he said.