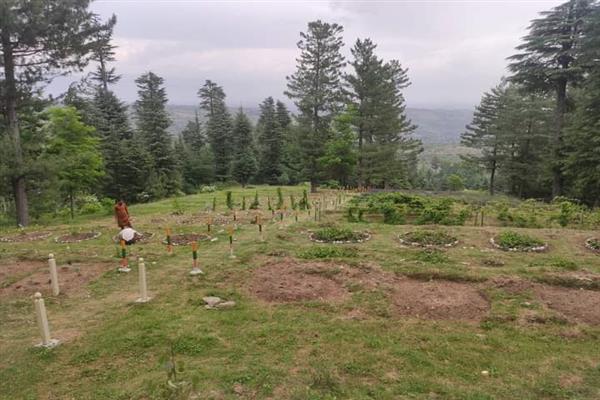 Baramulla, July 17: The biodiversity parks established by department of forest in North Kashmir have witnessed a record footfall of local tourists in the past few months.

The officials of the department estimate that over 90000 local tourists have visited eleven such parks this year in this northern district of Kashmir.

Witnessing the huge rush of people, the department is now mulling to create more such parks in the district.

“The bio-diversity parks are attracting local tourists and students. We are hopeful that to attract national and foreign tourists and the researchers as well in future,” an official of the forest department said.

He said that in its endeavour to make areas of Baramulla the most-preferred destination for tourists from across the globe, many initiatives had been taken by the UT government.

“These Biodiversity parks are a part of the initiative of the government to explore the tourism potential of lesser-known areas of north Kashmir and preserve the bio-diversity.

As per the official record, in the last few months, it saw 90363 visitors in around eleven biodiversity parks of four forest divisions in parts of north Kashmir.

"In between 1st July and 15th July, these parks witnessed 36961 visitors and the number is increasing with each passing day," an official said.

Such is the rush this time that the department had to engage extra employees for the maintenance of these parks.

Conservator North Kashmir circle, Irfan Rasool Wani, told Rising Kashmir that the forest department has opened 75 trekking routes in Jammu and Kashmir and forest rest houses have been put to online booking for the public.

"We are developing environment parks near these trekking routes and Forest Rest houses to promote ecotourism in offbeat destinations. This is helping us in forest conservation as we involve local people in these activities. They get a livelihood also. These months we are witnessing a massive footfall in these parks," Irfan said.

He said that the forest department also conducts student outreach activities in these bio-diversity parks every weekend.

"This is developing our future generation with sound knowledge of forests and environment," he added.

The main attraction of these parks is Herbal Vatika, artifacts of native wildlife carved in wood, environment signage, forest setting, and amphitheaters for students.

Irfan said that witnessing the rush of tourists, the department will establish a few more parks in the coming months.

Meanwhile, locals have hailed the efforts of the forest department to establish these parks.

Khazir Mohammad, a resident of Baramulla, said that it is a good step as students and tourists can visit these parks.

Another resident, Tanveer Ahmad, said that the concept of eco-park is a nice endeavor, for providing recreational facilities to nature lovers.