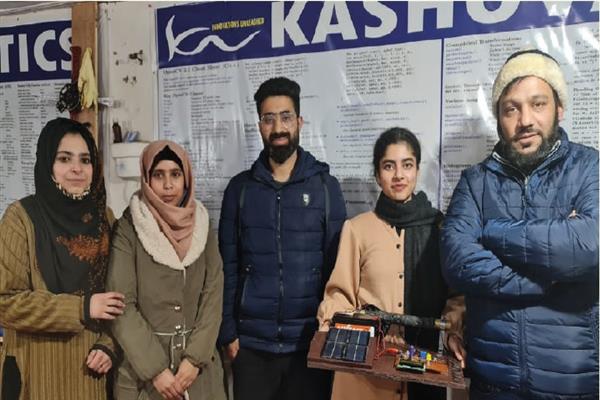 The 40 days of chilli- e- Kalan in Kashmir witness sub-zero temperatures causing inconvenience to the local populace. The major inconvenience that people always try to cope up in these harsh days is to ensure water supply to taps. Pipes freeze and block the passage of water to bathrooms and kitchens.

This problem is a tell-tale of almost every household here. Though people do the makeshift arrangements to fix this problem but sans a permanent one. A team of five students: Uzma Mushtaq, Nabeela Mehraj, Adnan Mushtaq, Hadi Mir and Seerat Ali have taken the task to come up with a solution to this issue. They collaborated and innovated a prototype, seemingly a permanent solution that will not let the water pipes freeze in winters.

The idea popped up in Uzma’s mind who later on discussed the idea with the rest of the team members and mentors. The five started working on the idea in ‘Kashovatics lab,’ a research and innovation institute at Dargah Hazratbal.

Last year, winters were very tough compared to other winters. Having the harshness of the last winter in mind, she said, “Last year people faced huge inconvenience due to the freezing of water pipes which caused damage to water motors, tankers and supply lines. The traditional techniques didn’t work at that time.”

Talking about the traditional methods of de-freezing, she said that pouring hot water or saltwater over the water pipes causes damage to the pipes and water motors by creating a sudden increase in the temperature. “Due to the temperature difference, the metal pipes tend to expand from the outer side and shrink from the inner side and the pipes crack. The same happens with motors and other metallic objects,” she said.

She said that there was a need for something which could have avoided the freezing and the damage associated with it too.

Another innovator, Nabeela Mehraj said that the device is an add-on module that can be fitted anywhere on the installed piping system.

“The project is an induction-based heating system which will not allow the temperature to get down to the set temperature and will never let the pipes freeze during the winters. We have connected it to the weather monitoring system. The sensors will monitor the weather continuously. When the temperature goes below freezing point, it will automatically get activated and prevent the pipes,” she said.

Working on the project

Another method to heat the pipe and maintain the temperature is induction. In this process, an induction coil is used which doesn’t heat itself.

The module also comprises a sensor hub and electrical circuitry. Temperature sensor, voltage sensor and current sensor are the three sensors in the system. Solar panels, solar charge controller, battery, ac input, a power converter is some of its components.

The power supply for the functioning of the device is given to the power converter which converts the power and stores it inside the battery. Another method of power generation is through solar panels

The students were mentored by Jehangeer Aurshad and Rouf-ul-Alam Bhat. Jahangeer Aurshad who runs the Kashovatics Lab said that the device is a must-have for the people who live in cold regions particularly in Kashmir. Arshad said, “We have made it low cost so this de-freezing device should be affordable to all.”

He said once connected to the internet, it will send a warning alert to the user and the system will be functional.  As Kashmir in winter usually stays under darkness, he said the solar panels are kept for generating electricity. “Due to the absence of electricity in winters, we have kept solar panels to generate the electricity. It is chargeable through solar energy.”

Talking about the de-freezing of plastic pipes, he said that students have made a jacket with the help of defogger mesh. “Mesh of defogger lines will detect the temperature and the system will be activated,” he added.

The patent for the prototype has been filed under application number 202111060290 and the patent has been published by the Patent Authority of India.

The innovators are currently looking for angel investors to convert their prototype into a functional entity. One of the five inventors said, “We have worked hard on this project. We are looking for sponsors and investors so that we can do mass production as it is a very useful device for every building.”