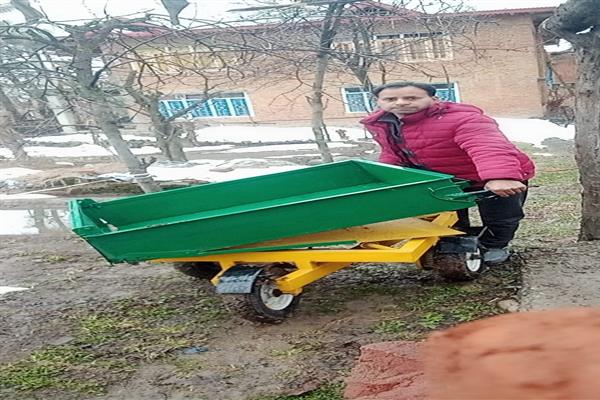 Working for the welfare of society, Shabir Ahmad Malik, has a number of innovations to his credit. Hailing from Qazigund, district of Kulgam, he has been working on his innovations not to get popular but to ease the problems of the common people.

Shabir said, “I have seen people dealing with problems in day to day life. Every problem needs an immediate solution which can make our life easier.”

The 27 year old innovator has been doing innovations from his early life but due to the lack of knowledge, he couldn’t transform many of his ideas into physical form.

The ideas hit him when he sees himself struggling with the problems. “If I am facing this problem, maybe the other person is going through the same. Let me find a solution for both of us and others as well,” he added.

When the construction of the second floor of his house was going on, his father who is a laborer by profession had given him a daily task of  carrying the construction material upstairs. The daily process of carrying material on his shoulders tired him up and at the same time he couldn’t refuse the task given by his father. To ease his work, he made a brick lifter.

The brick lifter is a handheld machine which is used to carry the material from one place to another and it features a movable top container which can be rotated and lifted. The brick lifter makes the unloading easy, effortless and is also budget friendly for the users.

He said, “The lifter caters to workers working in factories, construction sites and industries. The important thing is easy unloading where a user has to put less energy in doing so.”

The construction workers spend long hours lifting the heavy loads from place to place and the prolonged back bending postures put additional strain on the body which causes serious health issues.

“Pushing, stooping or bending for a long time can take a heavy toll on health. Sometimes loss of body-balance can also lead to the big accidents which are being reported in the news. The lifter can be used to perform all the heavy tasks in less time,” he said.

Talking about the time saving concept, he said he makes innovations that save the time of a person and eases the job.

Another innovation is a multipurpose washing brush. Watching the women folk washing the heavy carpets, he made a machine with a rotating brush.  The machine comprises the sink which has a drum attached where water and detergent is mixed and the system also has an outlet for water. It also has a brush which rotates and strokes the carpet. To save the water footprints, sufficient water is put which will reach every side of the carpet.

Again the innovation eases the job of washing heavy carpets and matting which usually requires a lot of time and effort.

His recent innovation is the modified cart. Talking about the traditional cart, he said while going up or down the sloping road, the user of the cart has to find the stopper to be placed under the wheel for stopping the cart. Many times, the stone or brick which can be used as a stopper is not handy and sometimes, the heavy load on the cart can push back the user.

The modified cart has a brake system installed which can stop the cart if the user wants to take the rest. He said, “The user gets tired of pushing the cart and would want to take a rest. In such a case, he can put the brake system on and not worry about it. Also due to heavy load, the uncontrolled movement of carts will be avoided,” he said.

Apart from this, the multipurpose directional cart also has an option for automatic unloading. Shabir is looking for further modifications and improvements to be done in the modified cart project.

Another innovation which made him receive huge appreciation was a smart stick-a stick serving multiple purposes.

During early morning hours of winters, when his grandfather used to take him along to the mosque for the morning prayers, Shabir had to handle many things- a stick to ward off dogs, a kangri for keeping warmth, a torch and also his frail grandfather.

He said, “It was unmanageable. I kept thinking of something with which other things can be attached. I made a stick where I adjusted a watch, and then I fitted a torch with it. I also noticed that elderly people wear specs. They often forget where they kept it once they take them off so I made a space for spectacle and other essentials like thread and needle which most of the elderly people take with them.”

To carry important things, he added compartments to the single stick. For visually impaired persons, he used sensors for detecting the obstacle which would alarm the person to change the direction. The stick also has sensors for producing vibrations to ward off the dogs.

As every success comes with struggle and Shabir had to face his part when the society went against him for his innovations.

“When people came to know about it, they didn’t take it positively. They started filing complaints against me and accused me of doing illegal things. I was very tense,” he said.

Bearing the harassment, his family too didn’t support him enough but he believes that his hard work will bore him fruits soon.

Shabir has been scouted by National Innovation Foundation Cell J&K, Institute of Technology, University of Kashmir in 2012 and till date have received incubation support for prototype development of innovations like Multipurpose Washing Brush, Modified Spade, Multipurpose Branch Pruner and Multi directional Cart from National Innovation Foundation (an Autonomous body of Department of Science and Technology, Government of India). He has also participated in Festival of Innovations at Rashtrapati Bhavan New Delhi and other innovation exhibitions organized by NIF-India.

He is presently working on innovation “Modified Tashnari” whose incubation support is also provided by NIF-India.

The copper Tash is a basin to wash hands that collects water whereas Nari is a jug-like vessel which is used to store clean water. It is available at every household and is widely used at occasions or weddings.

The traditional Kashmiri Tashnari involves the use of both hands in lifting the Tash and Nari separately.

Shabir has introduced a modification by putting the basin called Tash on wheels and it also has a tap attached on the top. The Tash moves on its whereas the tap works on the button.

He would make further modifications by adding a sensor tap which would replace the working of tap on button system.

Considering his skill as God gifted, he said that he doesn’t think of it as a profit- or money-making business but service to society.

“Most of the innovators belong to humble backgrounds. We as full time innovators have no other work. Innovations are what we know and nothing else. Government should support us so that we can work more and earn a decent living for ourselves,” he said.