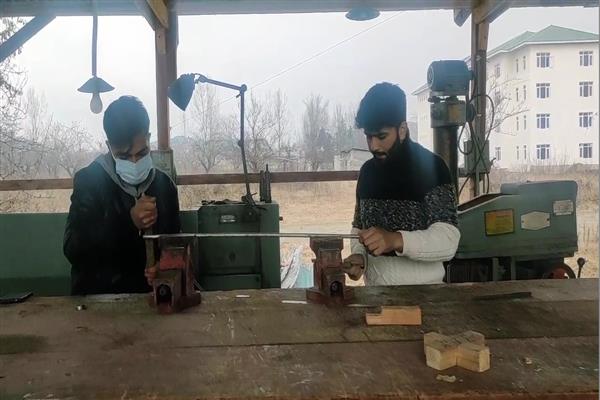 Mohammed Sultan was in love with his chickens which included five hens and a cockerel. However, being in his late 70s, Sultan often used to forget opening the coop of his domesticated fowl in the morning, due to which the poor birds remained unfed for long hours.

Although Sultan loved spending time with his birds, their upkeep, especially cleaning their coop daily was also a troublesome affair for the elderly person, who was also dealing with his lower back problem.

For Sultan and other people who find it difficult to feed, clean and open the door of their traditional chicken coop, five engineering students from University of Kashmir have devised a modern coop which opens and closes automatically.

Besides, loaded with the sensors, it also feeds the animals at whatever time you want them to be fed.

Five Engineering graduates from Srinagar have created a unique ‘Automatic Chicken Coop’ which can perform multiple tasks without any help.

The idea has been conceptualized by Aquib Rashid, Farhan Altaf, Talib Qadri, Insha and Sameen Kawoosa. All of these students are pursuing B.Tech in Electronics and Communications from Institute of Technology, University of Kashmir, Zakura Campus Srinagar.

Based on microcontrollers and sensors, a fully automatic chicken coop has the ability to perform multiple functions.

According to the students, the ‘Automatic Chicken Coop’ detects the weather conditions, sunrise, sunset. It does all the cleaning to ensure the coop always remains hygienic and safe for chickens. It has an automatic water tub which has the ability of self-cleaning and also changes the drinking water to keep the water hygienic.

Besides this, there is a small cage attached with the coop, so that the chickens will come out through the automatic door every day and remain safe within the cage from any predator.

The door opens and closes automatically by sensing day, night and weather conditions to keep the flock safe.

The automatic coop is affordable and can work on solar energy too.

Aqib Rashid, one of the innovators, told Rising Kashmir that some people avoid rearing chickens at their homes because they find it difficult to take care of them in a day.

"But this automatic chicken coop has a solution for all the problems which will prove beneficial for bird lovers. Without putting effort, they can feed their chicken with the help of an automatic coop," he said.

He said the owner of an automatic coop will not have to do anything, the coop will perform all the functions.

"This device monitors the temperature for the safety of the flock. It also auto feeds the chickens, so that the chickens are always fed on time and so a person doesn't have to spend time feeding them," he said.

Farhan Altaf, another innovator, said that on the top of the chicken coop, a display has been placed, which performs different functions.

“It displays the number of chickens inside the coop, temperature and the current status of the door (Open or Shut),” he said.

The students said that chicken coop should always be hygienic, also the water source should be clean and water should be changed daily for keeping the flock healthy. A filthy and unhygienic coop can cause diseases. So, we decided to come with this innovative idea,” he said.

The students thanked Jahangir Ahmad- who invented a wireless prototype diaper and Rouf-ul-Alam for helping them in this project.