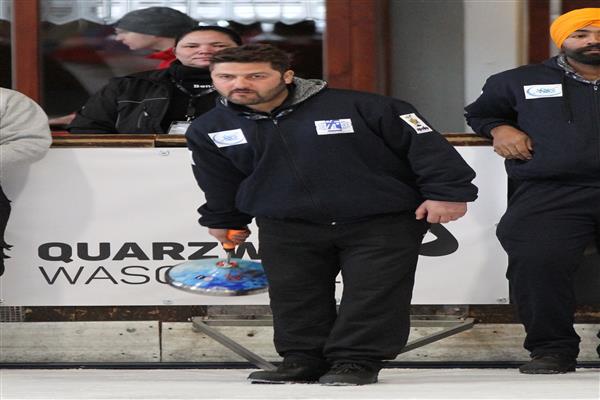 Mohammad Sarfaraz Fargadoo, a 37-year- old international Ice Stock Sport player from Kashmir has been working in twin shifts – one during day and another at night – to chase his dream of becoming international Ice-Stock player.

After the years of hard work and dedication towards the sport, Sarfaraz is going to be part of 32 Indian Ice-Stock squad players who will represent the country at the upcoming International Ice stock championship scheduled to be held at Ritten Italy, from February 21 to 27, 2022.

Sarfaraz is a current Indian Ice Stock Sport athlete and captain of the Indian National Team. He is widely considered as one of the most popular Ice Stock Sport Athletes from Asia.

“I am currently the Asia’s highest scorer in Target Competition, a score of 154 which I have achieved in Single’s Target Event in Harbin, China International Cup 2019.”

He is also the head coach of senior men and women teams for Ice Stock Sport in Jammu and Kashmir. He also monitors the progress of J&K A and J&K under-19 Stock sport teams.

In 2018, J&K ice Stock Sport appointed Sarfaraz as the Head coach of the state team. Known for his sound technique, Sarfaraz has proved many times in international events why he is widely regarded as one of the greatest athletes from Asia in the history of Ice Stock Sport.

“In 2018, I was the first player from J&K who was selected as Captain for the Indian national team for the 12th Ice Stock Sport World Championship 2018 held in Amstetten, Austria,” he says.

Since then, he has represented India as Captain on numerous occasions on International Turfs including the 1st International China Cup 2019 and in the 13th Ice Stock Sport World Championship 2020 held in Regen, Germany.

From early School life Sarfaraz had been dreaming of becoming a cricketer and had been playing club cricket for a long time.

On one occasion his friend who is also a cricketer, decided to join Rugby sports as he was a bodybuilder so he was inclined to play Rugby.

“In 2008 my friend got selected for the Rugby Nationals and then he invited me to watch his games and click some nice photos,” he says, and added “it was the moment which got me inclined towards Rugby and decided to play it professionally.”

And when they reached back to Kashmir, he started practicing rugby at Polo ground and eventually he got selected for the district tournament and then state tournament.

In 2012, he was selected for the Lahore International Games where two Rugby clubs were invited from India; one was from Delhi and another from J&K.

“Unfortunately, I could not participate in the event as my visa arrived very late,” he says, adding that his best memories and performance came in 2014 when he was selected for Callaghan Cup 2014 where J&K bagged Silver Medal.

“It was a very proud moment for the whole Team as this feat was never achieved before us,” he claims.

In 2015 he was selected as Captain of the team and he participated in Callaghan Cup held in Orissa.

“This time we were struggling with injuries as most of the senior players in our team were not part of this tournament, but still we were able to win 2 out of 4 matches,” he says.

He also was captain of J&K team in 2016 in Callaghan cup where he impressed experts and spectators by his performance.

“For the next two years I was in and out of the Rugby team owing to injuries,” he says.

In 2018 when he was selected for the 12th Ice Stock Sport World Championship 2018 held in Austria, he said goodbye to Rugby and focused on Ice Stock only.

“I decided to hang up boots in rugby and gave full time to ice stock sport,” he says.

In 2014 winters, he was introduced for the first time to Ice Stock Sport when he was playing snow rugby tournament at Gulmarg.

At that time, a camp which was organized for ice stock sport by Indian Ice Stock Sport Federation in collaboration with J&K Tourism and a coach from Germany who was training ice stock players there, also happened to be the President of International Federation of Ice stock sport.

“During this time, I was attracted to this game and it was then and there I decided to continue this sport professionally,” he says and added “After that I participated in all the state and national events where I won several Gold medals for my state.”

In 2018, he got selected for the world championship which was a dream come true moment for him. To participate internationally was never easy for him owing to lack of financial support or sponsorship.

“When I got selected for the world championship the very first problem, I faced was lack of financial support for which I tried to reach every institution that I requested to sponsor me but I was heartbroken as no one came forward to support me, he says and many people including my friends and relatives started criticizing me.”

He was told that it is stupid of him to think playing international that too in Ice stock sport that has no future.

“Even some of my well-wishers would suggest that I must focus on my career (earning) rather than wasting time in this new sport,” he says.

But despite such a huge criticism and enormous discouragement from almost everyone could not stop him from chasing his dream to play at an international level, so he started working in twin shifts, to self-sponsor himself.

Working in twin jobs was never an easy task for him besides he had to manage practicing schedules for the sport also.

“I would work in Tech Mahindra from 6:30 pm to 3:30 am, and then would take some sleep for a few hours and start my day job of digital marketing 10:30 am onwards,” he says, adding, “it was a roller coaster ride for me, which was exhausting me physically and mentally.”

Sarfaraz is dreaming of representing the country in the Olympics 2026 to be held in Italy as he believes that till then Ice Stock sport shall be included in Olympics sports.

“Family support kept pushing me ahead in this feat, particularly my mother,” he says.