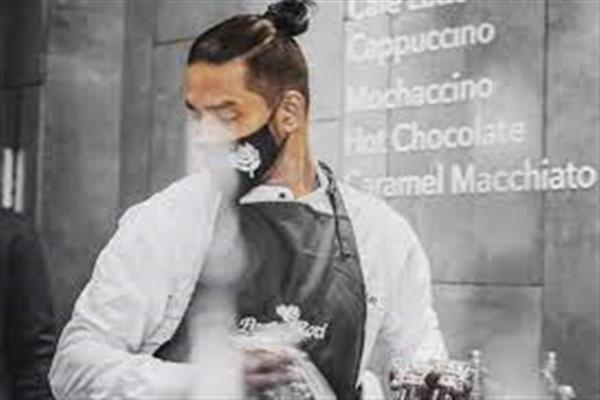 Sanjar Dev(29)- resident of Hyderpora left Srinagar when he was just four. His parents worked in Delhi so he had to move to Delhi although he occasionally visited the Valley to see his grandparents.

He did his schooling from Delhi before doing a bachelors degree in business management from Bangalore and masters in International Business from the United Kingdom (Coventry University).

Soon after finishing the University, Dev worked with many big international companies including Dames De La Mer, ITC, Jet Airways. However, his yearning for Valley was not letting him sleep in peace. He longed to return to his motherland and one day he did as his heart pleased. He returned to Kashmir.

Though, Sanjar returned to Valley in 2018 but he was not sure what to do here.

With international exposure under his belt, he noticed that no international franchise had opened its outlets here. “I personally felt there was a vacuum between demand and supply of good food. So I brought in a brand that I personally liked and believed in. I started with “Wok To Walk”.

The brand serves authentic Chinese eatery. Wok To Walk has only six outlets across India. Sanjar had the plans to kick off the operations in early 2019. But as soon as he started his venture, Article 370 was abrogated and it spoiled his show. It deterred his plan and he had to wait till the first week of December to open it.

Dev was not content with one brand only, therefore, he opened another international brand “café Paparoti” in September 2020. “Since all Kashmiris are bread lovers, and in Paparoti, you are served the best quality buns,” he said. The brand has 450 outlets around the world.

“I was aware that there would be lots of challenges while starting a business in the Valley, but I chose to take risk.”

Highlighting the challenges, Dev said, “There are many issues that one has to deal with. Lack of electricity in winters is one of the major ones.

To deal with the problem, Dev used generators most of the time, which was proving to be a costly affair.

“Imagine, my expenses, with fuel expenses touching skies, we were running gen-sets almost round the clock,” said the businessman.

“Besides, there is an absence of skilled manpower in Kashmir. Also we had to get our equipment airlifted from Delhi most of the time adding more to our expenses, but our commitment towards our work didn’t deter our resolve for continuing with the good work,” he said.

Dev said that the slow speed of the internet was problematic for his business, but now that the speed has been restored to 4G, it is a great help.

He also finds the government a little slow on ensuring ease of doing business for entrepreneurs in the Valley.

“There is not much ease of doing business in the Valley. Government should come up with more friendly schemes to boost young entrepreneurs and the administration should support local entrepreneurship,” he added.

“There are three things which we don’t compromise on, the ambience of the restaurant, the service and the food quality. I believe if you stick to these values the customers are always going to come back,” he added.

“There wasn’t much competition before. But now there is a boom in the restaurant industry which is a positive thing for any industry. Now there is a variety of food at your disposal,” he said.

“Despite so many ups and downs, my journey has been very fruitful and rewarding. We have many other brands in the pipeline which we shall start very soon. Serving in your own city is a different experience,” he added.