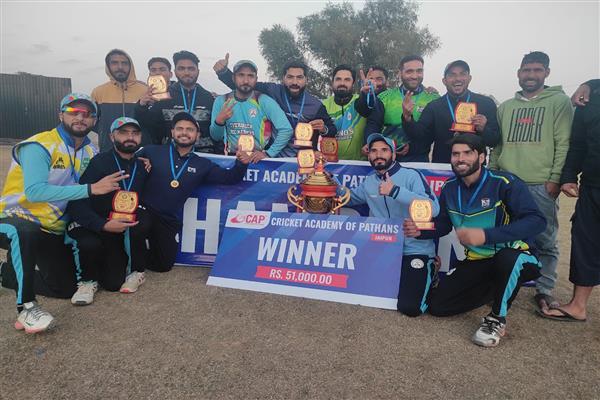 While batting first Sahara Club Gulgam made a massive score of 180 runs while losing its 9 wickets in the allotted 20 overs.

For Team Hooked, Prathvi Nagarwal was the top wicket-taker who took 3 wickets while Irfan Ul Haq got 2 wickets for his team.

While chasing the target of 181 runs, team Hooked could score only 136 runs and get bundled out in 17.4 overs.

For team Hooked, Chankey Pandey was the top scorer with his bat, scoring 34 runs, while Danish Muzaffar scored 21 runs.  Akeel and Meeran Yousuf chipped in with 20 runs each. For Sahara Club,  Lakhan Bharti got 4 wickets.

Shubham bagged the man of the match and Lakhan Bharti player of the Tournament award.

At the closing ceremony, the Winner team was awarded a cash prize of Rs.51, 000/= whereas the Runners up team was awarded Rs. 21,000/=. On the occasion, Individual trophies were given to each player.

The teams were divided into four pools. Each pool consisted of four teams. In the league stage, every team played three matches. The top team from each pool qualified for the semi-finals.