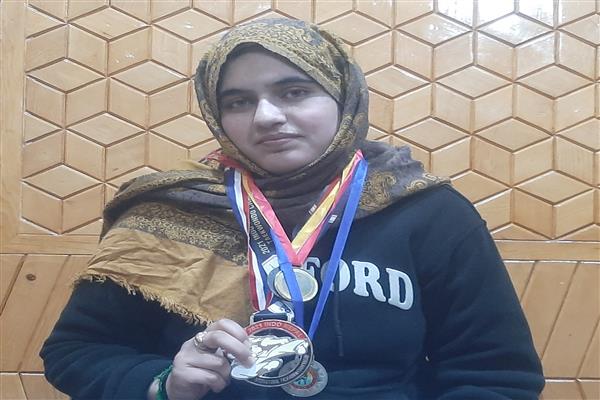 Hailing from Budgam, Taekwondo champion Rabiya Zehra has achieved laurels for Jammu and Kashmir at a young age.

The year 2021 proved to be a milestone year for her as she participated AT international level to prove her excellence in the taekwondo championship and achieved the gold medals in all formats.

Rabiya has played at various national and international platforms and has won more than 25 awards including gold, silver and bronze medals.

Some key success events in which she participated was District Budgam trophy at district level and Rabiya was also invited by District Magistrate Budgam for the appreciation.

At international level she participated in Indo-Nepal Taekwondo Championship 2021 which was organised by sterling Taekwondo Association of India and Rabiya achieved gold medal in the Championship.

“It was an amazing experience, when I won the gold medal for the first time in the taekwondo championship in 2021 and it encouraged me to explore more”.

She said that being a girl she received lots of criticism at many stages for choosing a different path.

However, the young athlete has received immense support from her family. Her parents are so proud of her.

When asked about the coaching institutions, she stressed on female coaches for girls in the coaching centres.

She said girls should come out and prove their mettle in all aspects of life.  “Whatever they want to pursue in life they should be encouraged especially by their parents.”

Rabiya’s goal is to be a Taekwondo coach and wants to train the up-coming generations.