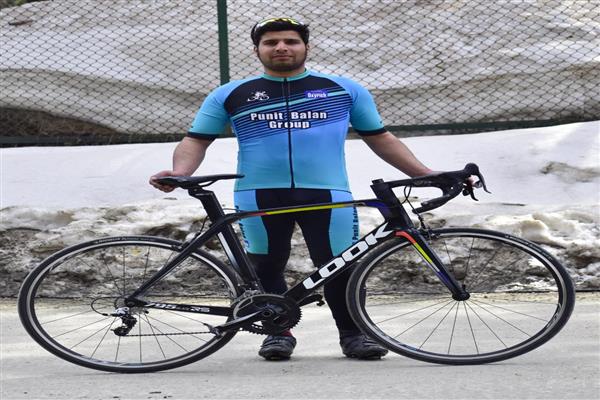 Saleem signed this contract at BB Cantt Srinagar for the period of five years in which he was provided with an international standard cycle worth five lakhs, five uniform sets of around Rs. 50,000  and other equipment like cycling shoes, helmets, specs, etc.

Besides, he was paid cash of 1.5 lac in advance for training expenses and and according to the contract he shall be paid Rs. 50000 each year besides other incentives as per his performance.

J&K's cycling champion, Saleem has been able to fulfill his long-cherished dream of buying a costly imported cycle, after the Punit Balan group came forward.

26-year-old Saleem has been pedaling for the past 11 years starting at the age of 13.

Saleem, who is currently the top cyclist of the state, had a dream of buying an imported cycle. But financial constraints always came in his way. He approached several people for sponsorship but to no avail.

Finally this year, the Punit Balan Group of companies came forward to sign him in their sports division by giving him an Imported Bicycle worth 4.9 Lakh.

"If today my dream has come true it is because of Mr. Punit Balan. He did everything possible to get an imported cycle for me. Punit Balan Group has signed me for a period of 5 years," he said.

He added “Punit Balan Group” provided him with a “Look Bike” brand, model RS Blade 795 made in France costing Rs. 4.9 Lac, besides the bike he also got high-quality cycling kits, helmets, cycling shoes, and other Accessories.

“I can now compete at the national level with the modern and latest equipment and I hope that I can  bring laurels to the valley,” he said.

About the cycle, he said it is an imported cycle that weighs 7.5 KG which is very light as compared to the ordinary cycle which weighs around 28 Kg. It is made of carbon fiber and has features like Sram Group-set, 11 Speed gears, and a shape that is meant for international races.

“These cycles are being used by cyclists in all the national and international events and it is only due to the lack of cycles, state players are not able to achieve anything big at the national arena,” he said.

He says that Punit Balan has assured that their group is ready to support talented sportspersons of Kashmir and will help them to nurture their talent and make them grow in their respective fields.

“We are confident that one day one of us will represent the country at the international arena,” he said.