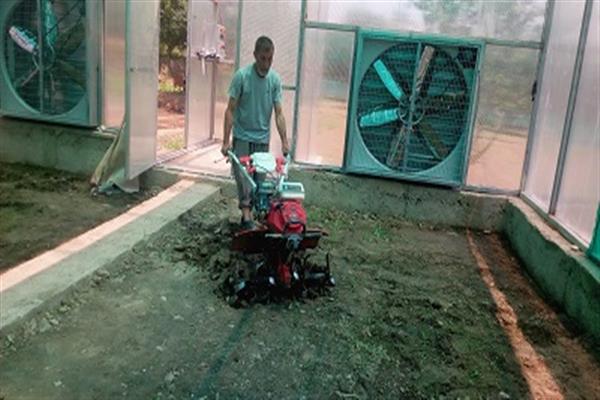 Farooq Ahmad Ganie, a middle-aged farmer, is busy working in his field in Tahab village of Pulwama district. He shifted to new farm practice which spiked his returns drastically.

The farmer said that he is aiming at four times increase in his annual returns.

He added that up to June this year he was able to cultivate three vegetable crops in a year with his small sized low quality poly house.

“Now I will be harvesting four crops in a year with the installation of a high tech polycarbonate poly house,” he said, adding that a vegetable crop takes around three months to yield its produce.

“I can begin sowing in January under controlled conditions inside the poly house and by February seedlings will be ready for plantation in the open field,” he said, adding earlier it was not possible and farmers in Kashmir could raise one vegetable crops in a year barring collard and carrot which can be grown five and three times respectively.

This progressive farmer is growing around 21 exotic varieties of vegetables on his five-kanal land including broccoli, cabbage, lettuce, parsley, red paper and cucumber.

“I earn around rupees 15 lakh annually after deducting all expenses,” he said.

He started cultivating red pepper on one kanal of land to begin with.

Next year, he planted six exotic vegetables on one more kanal of land which yielded him a profit of rupees 75,000.

Encouraged by high returns, he diversified and turned his five-kanal barren land into an exotic vegetable garden growing 21 different varieties.

The Pulwama farmer sells his produce locally and some of his best quality vegetables find overseas buyers too.

“One of my consignments was exported to Dubai last year by the Agriculture and Farmers Welfare Department under the ‘PARVAAZ’ scheme,” he said, adding his consignment was one among six from different farmers across Kashmir.

He said that after processing by a second party his vegetables are also exported to Germany and the U.S.A.