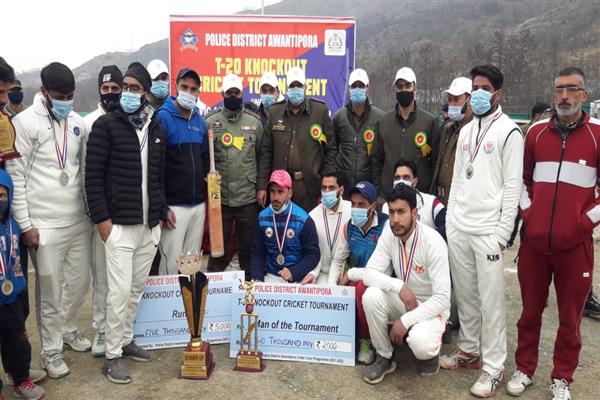 A total of  12 teams from different parts of PD Awantipora participated in this knockout tournamnet.

The final match of the tournament was played between Meej Pampore and Crescent-11 Hariparigam.

Crescent-11 Hariparigam won the final match by 30 runs. Mohd Younis was declared Man of the Match and Nadeem Ahmad was declared as man of the tournament for their brilliant performances.

The  tournament had started under the aegis of Civic Action Programme (CAP) for providing platform to the talented youth and channelize their energy in positive manner.

While interacting with participating teams SSP Awantipora said that youth has power for a change and they should use their energy in positive activities that also spare youth from the menace of drugs as it not only ruins their life or family but society as well.
He also appreciated the efforts of Officers, Officials of Awantipora Police and whole organizing team for making the Cricket League possible in the best possible manner.

SSP Awantipora also distributed Cash prizes, Medals, trophies, momentous among participants.
The winning team was awarded with cash prize of Rs.10000/-  whereas Rs. 5000/- was given to runner up team. However, Man of the tournament was awarded with Rs. 2000/-  and man of the match with cash prize of Rs.1000/-  Khrew Under-19 cricket team was also provided sports kit while all other participating teams were given cricket bat on the occasion.