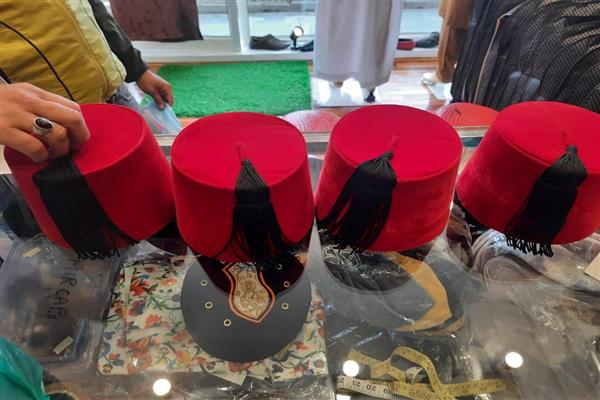 The bone-chilling winters in Kashmir are months long and with better clothing one can beat the winter chills to stay warm. Most of the people opt for clothing which can satisfy their fashion needs as well as these clothes can be worn for events, occasions and workplaces.

Despite modern and stylish clothes available in the market, the Pheran is still considered as the king of winter garments and has not lost its importance over the years. Keeping its pace with the changing times, once a household garment has now become a fashion style statement.

Pheran adorning with tilla and other embroideries, with matching or contrasting pants are mostly in trend among the women folks in winters. However, one can also team up the Pheran with the pants, footwear and the headgears of their choice.

Iqra Ahmad, a young entrepreneur and founder of the online clothing store- Tulpalav, is known for making Kashmiri Pherans with a contemporary twist.

She said her main goal is to keep the essence of Pherans the same as it's been going on since ages.

“On top of that we also have to make sure that it is progressing with the world of fashion. We intend to showcase our work to the world and for that we try to bring new trends in Pherans. We started doing experiments of the color combination and making it more diverse so that it can be treated as a daily wear for women irrespective of the occasion,” said Iqra.

This winter, she has come up with the new concept called Heritage Transformation by introducing Dussa Pheran, a vintage touch in her winter collection.

Dussa, an oversized shawl made of fine wool, had lost its essence over the years and was kept as a souvenir only. “For some it is tradition, comfort for others and sometimes it’s just a fabric that holds memories. Sadly, shawls have become an addition to occasional attires. I thought of using it for Pheran and pants,” she said.

Over the past couple of years, Tulpalav has seen a good influx of customers. Iqra said there is a lot more in store for pheran lovers.

“We are already working on giving our customers something new for all upcoming seasons. I am all pumped up to explore more into the fashion of Pherans and customers will definitely see new designs and concepts from Tulpalav,” she added.

Harf – hercollection of Pherans involving the use of thread in making harouf (letters) and designs speaks about simplicity and elegance.

Qurab Pheran is a special kind of Pheran whose lower half of the sleeve is pinned to the shoulders. It is believed that Qurab pheran was earlier worn by married women of elite class only. With contemporary tilla designs and colors, the Qurab pheran is now worn by young female folks too and is teamed up by jeans and boots.

Earlier, the Pherans used to be loose and made of woolen fabrics that fell down the knees and had pockets on both sides. Also, it has a detachable cotton lining called postch in the local language for extra warmth. The Pherans were kept loose so that one can use kangri inside.  The traditional Pherans are heavy and meant for intense cold.

Pheran is a must have garment, especially during Chillai Kalan (the harshest 40 days of winter in Kashmir)as the snow is expected during this time.

Ghulam Rasool Ganaie, who has been in the tailoring profession since 1980 says the Pheran has undergone various alterations and modifications to cater the needs of present times.

Talking about men Pherans, he said, “The new generations prefer to wear collar pheran, hood pheran, coat pheran which are often adorned with fleece or contrasting fabrics. Modern Pherans are tight. The traditional pheran is made of six rectangular pieces of clothes stitched together.”

On December 21, Pheran Day was celebrated in Srinagar to celebrate the arrival of ChillaiKalan.

Marking the occasion many people took to their social media handles and shared their pictures wearing pheran while using the hashtag#WorldPheranDay.

Soon Kashmir will be transformed into the land of snow. Alone Pheran will not suffice, caps or headgear are important too.  It is believed that in Kashmir, caps were first worn by British polo players. With time, high class people and bureaucrats also started wearing them.

Mir Reyaz Qadri from Hyderpora has been into the business of caps for years. Importing the caps from Turkey, Reyaz says he sells them not only in Kashmir and other parts of India but in countries like Nigeria, Bangladesh and Dubai.

He claims the caps nowadays popularly called as Ertugrul caps have been brought by him years before the character Ertugrul became famous among the public.

Reyaz said, “When I ordered the caps from Turkey, Istanbul long back, there was no concept of Ertugrul in Kashmir. Everybody liked the cap and despite being costly, the caps were sold out for its good quality and different features. Each cap costs about Rs. 3000.”

He claimed the caps were worn by the people during the time of Sultan Suleiman, former sultan of the Ottoman Empire.

“ChillaiKalan is the period of snow and the demand for caps has started.  The caps that I sell are of pure imported leather and fur. I am still selling the caps at a good price and the customers who prefer quality pay me the amount. The Islamic scholars of Al Azhar University in Misr, Egypt wore the caps when they got a degree. I have such a cap and people wear it in winters,” he said.

Most of the customers ask for fleece or fur caps for its warming properties. He also said that his recent cap is from Russia which is made of leather and fur and has no stitching anywhere. The cap has long leather earmuffs for protecting the ears from cold. “It’s waterproof and is worn by the soldiers of Russia,” he added.

Talking about the Sufi or Islamic scholars, he said the cap that Maulana Rumi- a mystic poet used to wear is called Arfe Aam or Sez cap which he has also imported from outside and is common among Sufi scholars

Mohammad Aslam runs a handicraft shop in HabbaKadal and deals with leather socks, caps and various embroidered Pherans. He said the customers are opting for traditional wear but expect a stylish touch in whatever they wear. “Traditional things were warm and durable but one has to keep pace with the changing times as well. From commoners to elites, everybody in winters opt for cozy and comfortable clothes to embrace warmth,” he added.