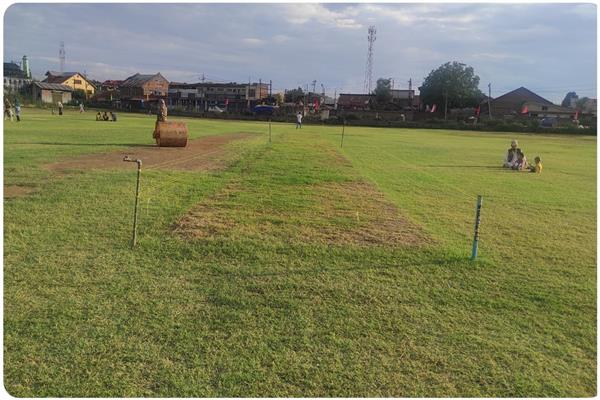 Cricket is one of the popular sports in the sub-continent and no wonder it is avidly followed in the Valley. Playgrounds can be seen abuzz with activities all over the Valley especially on holidays. Even though the government recently initiated various measures for uplift of sports infrastructure there is still a long way to go.

Tariq Ahmad Sofi and his friends from Zainakote area in Srinagar outskirts undertook a major task to transform their local playground and prepare a quality turf wicket to encourage professional cricket.

With no support around other than the pooling money, they started the initiative of switching to turf cricket from the mat one.

“It was not an easy call as we had nothing in hand. It involved a lot of money, and it was not confined to the track only we had to level the outfield as well. We had to put a complete halt on cricketing activities”, Tariq, who is also chairman and president of the locally framed cricket association, told Rising Kashmir.

Another local cricketer Sajad Ahmad Dar said initially they received a cold response as only a few people came forward for their help for this massive makeover of the ground.

“We had to face a lot of criticism but that did not deter us as the initiative entailed making the game easier for the cricketers when they play outside the valley”, he said.

For Tariq and his men, the initiative of switching from Mat to turf cricket was not easy as it needed huge resources, but they worked hard to ensure the work was not halted due to the lack of required funds.

“We approached businessmen, well-off people of the area, and sought financial assistance from them.  There was a lukewarm response but we somehow managed it,” Tariq said.

He said over the past 3 months they have spent more than nine lakh rupees on the ground, a record of which they have managed for their internal audit purpose.

Some young cricketers of the area have volunteered to report the daily work and other requirements of the ground.

Shabir Ahmad, a senior member of the cricket association, termed the change as ‘better late than never’. He said the change of surface from mat to turf will bring a major transformation in the cricket game in the area.

As the association has decided to inaugurate the ground by the end of this month, they have invited international cricketer Parvez Rasool to grace the occasion. Locals in and around the area are eager to witness their favorite cricketers playing on turf wicket.