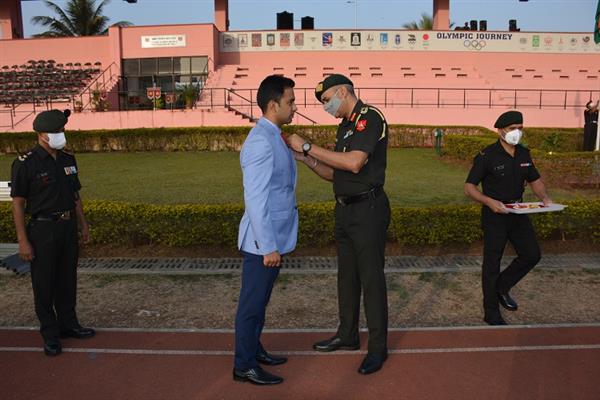 Pune, Feb 14: India's best-ever outing at the Olympics last year in Tokyo was not an odd exception, but the result of a carefully crafted strategy executed by experts, the backroom masters of modern sports.

The team of these new-age sports gurus included the likes of Palash Tiwari, Head Strength and Conditioning Coach at Army Sports Institute, Pune, who transformed some of the top athletes into world-class performers.

He was awarded Chief of Army Staff Commendation card on 26 January, 2022

A professional like Palash keeps a hawk-eye on the overall development of an athlete, detailing his shoes, apparel, sleeping pattern, nutrition, weather, tactics, and sports science. To compete at the top level, one needs to maintain the highest standards on everything around the sport.

Palash says that the army is a crucial nursery of a world-class sportsperson, and its Mission Olympic Wing (MOW) is doing a yeoman service to the country's sporting prowess.

The five talent centres in MOW – Pune (rowing and various sport from Diving, Athletics to Archery, Boxing and Fencing), Meerut (Equestrian), Mumbai (Sailing) and Indore (shooting) are fully geared up to become assembly lines for athletes.

Palash said that the government has pushed for more sports Infrastructure in India.

Large complexes of sports facilities have emerged in various parts of the country. As we see more athletes coming out of these cities, a significant shift has been seen with sports development happening with Tier 2 and Tier 3 cities.

Some states have taken initiatives to transform the whole sport by Orissa adopting hockey, Manipur, Boxing, UP, and wrestling.

Army Sports Institute (ASI) focuses on quality by reducing the workload, recovery and regeneration, and biomechanical and physiological integration. "There is much other technical work that I do differently; most of it stays with my athlete. It's a blessing to see my athletes adapting to new changes," he said. Talent and technics go hand in hand, and an athlete's performance is enhanced through strength and conditioning.

Palash said that research is now a key ingredient in sports. The techniques matter at the international level, where a fraction separates champions from the rest.

"To become a sports educator or a coach in India, one has to be self-motivated to self-learn and excel in life. There are various private and government institutions offering various courses in Physical education and Sports Science; Most notable government institutions are the National Institute of Sports at Patiala, National Sports University in Manipur, Laxmi Bai National Institute of Physical Education at Gwalior," he said.

"Sport demands rawness in one's body to absorb hardships which come with being an athlete. He said that most of these qualities are found in abundance in our rural India," Palash said.