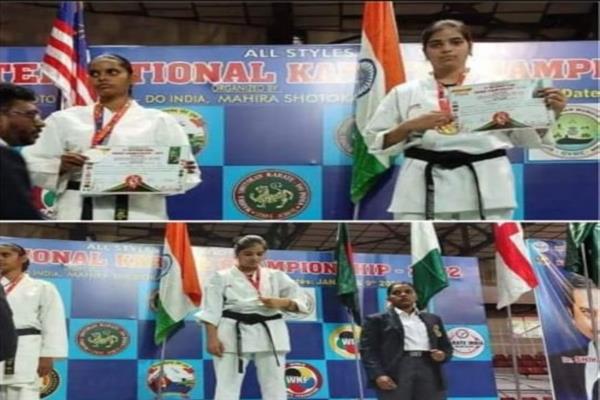 "I am preparing myself for the next Olympics, which are scheduled in Paris in 2024. I am hopeful I will chase my dream one day, "she added.

Initially, she faced manifold hardships, but her mother stood behind her like a wall.

According to Mehreen, her father dissuaded her from going outside for karate classes. “Though my father was adamant, I was backed by my mother, Shabnum Begum, who always fought for me,” she added.

Mehreen has recently given her 12th examination from Girls Higher Secondary School, Handwara, and her results are awaited.

I was inspired by a movie, The Karate Kid. “My mother also desired to make me a karate girl, and by the grace of Allah, I am a black belt in karate," Mehreen said.

"I commenced my journey from the local level to the state level and then played nationals in different states in the country."

Mehreen had her first brush with karate at a self-defense camp in 2013. About 25 girls had taken part in the camp, which was for most of them their first and last exposure to karate.

It seemed like a natural progression for the girl who was a regular participant at school athletic meets, 100 metres, high jump, and long jump. "The kicks, punches, and roar were the gateways to an unknown world,”Mehreen recollects.

According to Mehreen, her family is her greatest strength. "My father works hard to feed us, but they have never asked me to stop practising karate."

Giving gigantic credit to her mother, she said, "My mom is my biggest supporter." Whenever I take part in any karate tournament, she stands by me. "

Talking to Rising Kashmir, Mehreen’s mother, Shabnum, said, "My daughter is fond of Karate. However, in the beginning, she faced immense hardships and did enough struggle to fulfil her dream."

Though sometimes I resorted to heated arguments with my husband, I never compromised on Mehreen’s dream. I want to see her dreams come true, come what may, "Shabnam said.

"When she returned with a gold medal from Bangalore, after that her father never interrupted her for getting karate classes," Shabnum added.

She has consistently got a good cumulative grade point average (CGPA) in all her examinations and remained in regular attendance as well.

Mehreen’s mentor and coach, Faisal Nazir, also described her as a dedicated, devoted, and disciplined student in all forms.