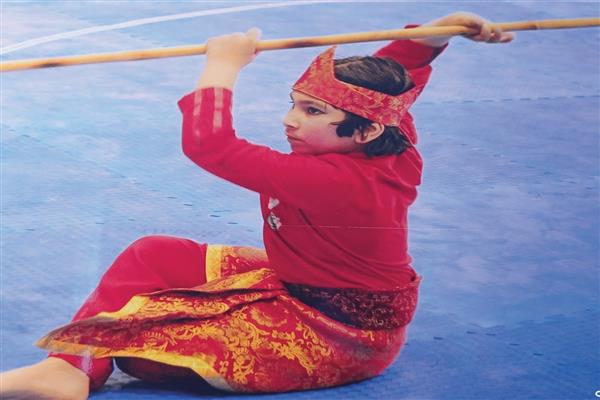 Ahmad Taha, 10, aspires to represent India in the Olympics championship. To date, he has bagged several medals in the Pencak Silat competition held at different national and international levels.

Hailing from Hyderpora, Srinagar his journey in martial arts started in December 2019, when on his way to school, he came across a hoarding of multi-martial Arts Open Tournament that was going to be held in the Indoor Stadium of Srinagar.

Taha insisted his father take him there. His father, who is also a martial arts player, met many of his close acquaintances there. “When I saw the place, I had decided that I have to learn the sports and win,” he said.

With this in mind, Taha regularly went for practice sessions. Getting trained by martial arts coach, Mohammad Iqbal, he participated in a competition of Pencak Silat at Mumbai Nasik in which Ahmad got a bronze medal.

It is pertinent to mention here that Pencak Silat is a common term for a class of related Indonesian martial arts. In ancient times, it was used as a defence during world war.

Later on, it was turned into a competitive sport for its revival. It has two forms- fighting and artistic. In fighting one can use every part of the body to attack the opponent. In artistic form, various moves are demonstrated by a single player which is called Tunggal.

Soon the lockdown was imposed due to Covid 19 and his father started training him at home with the available resources. Since then, he has participated in various events.

In March 2021, in Polo Ground Srinagar, Nationals was held where he won a gold medal and made a record of being the first player from Jammu and Kashmir to get a gold medal in Tunggal in all categories.

At one of the national events in Haryana, he participated in two competitions- Tunggal and Solo and received gold medals from both. Also, he made a record of winning two gold medals from Jammu and Kashmir.

“In between, I have played many local and state championships. I was also awarded by the Jammu and Kashmir Police Department. Whenever there is an opportunity to learn and get better, I give my efforts,” said Taha.

Currently, Taha is keen to play for whatever comes his way. He believes the sport is new and he has to put more effort into learning. Every day Taha practices for more than an hour. Apart from martial arts, he likes to play football as well and wants to be a pilot to travel around the world.

While sharing his experience during his events, he said that he feels nervous before his events and to overcome nervousness he thinks that he is the best among all who competes with him.

Apart from sport, Taha is performing well in studies and religious education as well.

His father, Mudasir Masoodi who is a businessman by profession said that one can find many coaches, facilities and equipment for other games but Pancake Silat is new and the facilities are not yet available in the market.

He said, “Some things are not even available outside Kashmir and have to be imported only. For this, the federation helps us a lot.”

The weapons required in the game are a special kind of knife, stick, sword and other things.

Recalling his time, Mudasir said that earlier there was no facility available and players had to face resentment from their parents. “It was a big no back then. There were very few players who used to play martial arts.

We had no support from parents and we used to save some pocket money to spend on travelling, facilities and equipment,” he said.

Mudasir said that nowadays sports have become important for every child as parents want to keep their kids away from electronic gadgets and other evils.

He added, “It has become a compulsion also as kids are glued to mobile phones most of the time and sports can keep them physically active and get rid of the mental stress as well.

Moreover, there will be no wastage of time and their energy will be channelized productively.

Mohammad Iqbal, Taha’s coach, said the Pencak Silat is now a recognized sport and is part of the job quota. “The scope of sports is high as the government has kept jobs for the sportsmen as well. There are a huge number of players. After the recent government order of providing jobs to outstanding sports persons, many kids are coming up as there is a ray of hope among them now,” he said.

He said that in Jammu and Kashmir, the sports facilities are upgraded and made available. “In almost all the districts, we have indoor stadiums and parents also want their children to play and win. The time has changed a lot.”

Talking about the Pencak Silat, he said that the game has been internationally designed by Indonesia that all the kids from the age of 5 can participate and the seniors aged 45 and above can also play.

While speaking about Taha he said, “He is an outstanding player and is very young. Though it’s not an easy game and has several jurus. He has won laurels in the game. It’s a unique event and difficult to do for his age but his hard work has paid him off.”