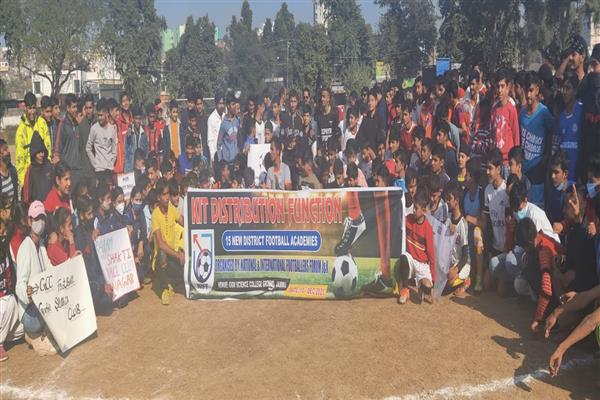 Around Eighteen football academy teams from various districts were present on the occasion.

Secretary J&K Sports Council, Nuzhat Gull was the Chief Guest on the occasion and distributed playing kits and equipment among the academy teams.

On the occasion, Gull hailed efforts of the NIFF for providing playing equipment to upcoming district footballers besides organising Youth Football League for junior age group players where they got ample opportunity to play and excel at the right age.

While assuring full support to players Gull said that Sports Council is always at the support of young and budding athletes and doors of her office are always open for everyone and everytime.

Looking at the fervor and enthusiasm among the players Gull on the spot announced to provide playing uniform sets for all 24 academy teams of district Jammu who are going to participate in NIFF Youth Football League scheduled to be commencing from next month at Jammu.

Pertinent to mention here, NIFF Youth League is currently being played at Srinagar. Which  will come to an end on Saturday after the final battle for the title between J&K Bank Academy and SCFA Srinagar.

A long spell of 42 matches were played in this league. NIFF is mulling to organise similar league at Jammu scheduled to be starting from next month.