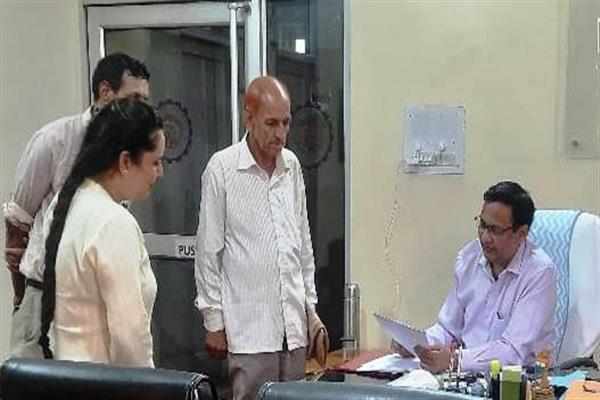 Jammu, July 12: “Nidhi Aapke Nikat” for the month of July, 2022 was conducted by EPFO Regional Office, Jammu here on TuesdayS for the stakeholders of Jammu & Kashmir.

The EPFO is servicing the entire area from Jammu & Kashmir and Ladakh with regard to settlement of claims, redressal of grievances, and facilitating stakeholders and so on.

Considering the large number of grievances and to ensure service delivery at doorstep, various online initiatives of EPFO such as balance enquiry, filing of online claims including transfer and advance claims and members’ basic details were explained with hands-on demonstration.

Gurucharan Singh, from M/s. K C Food Products Pvt. Ltd, was unable to submit the claim as his “Date of Exit” in his UAN was not marked. His employer was asked to “mark exit” and report.  Aman from K C Food Products Pvt Ltd responded quickly and apprised RO, Jammu over telephone about completing the action. Accordingly “claim form 19” was submitted.

Navdeep Singh from M/S Navdeep Singh Contractor informed that his data was not migrated from JKEPFO to Central EPFO.

Rizwan Uddin, RPFC-I called Ashwani from JKEPFO, who confirmed that partial data has already been migrated. For the majority of employees, who had left the job way back, the issue of interest was resolved through their Consultant. Their amounts will be reflected in the UAN within one week. Parshotam Kumar, employee of JKSFC Jammu, was unable to merge his two member ids. He was advised to submit form 13 through the “one member one EPF“ option available at online services tab in member e- sewa portal.

Hoshank Singh’s claim was rejected as he applied for form 31 and had only transferred the amount present in his UAN. The member was advised to submit form 19.  Sangram Singh from M/S Life Style Institute Pvt Ltd was unable to submit form 19. His employer was directed to  “mark exit” and the member was advised to submit form 19. Shri Darshan Kumar Sharma from M/S Dharmarth Trust appeared with the appeal to settle his claim. RPFC-I directed the DA to settle the claim. Puran Chand, employee of M/s Hotel Rani Maa, had filed a joint declaration request for correction in his name from Puran Singh To Puran Chand, which were updated immediately and accordingly .

Raj Kumar, an employee of M/s Dawa Bazar was unable to update his Bank KYC as his employer was untraceable. He was advised to open a bank account in SBI and as the bank KYC approved the bank, he would be able to submit the claim.

Nishant Gupta, an employee of M/S Future Retail Limited, was not having his UAN details, using the IT tools of EPFO, the UAN of the member was traced out and provided to him.   Nishant Gupta was further advised to submit Joint Declaration form. After completion of missing details Nishant Gupta would be able to activate his UAN and would update KYC.

Death claim pertaining to late Jia Lal was submitted by his son, Ravi Kumar, who was advised to submit a joint declaration to correct the deceased employee’s father’s name. Claim would be processed accordingly.

The endeavor of “Nidhi Apke Nikat” programme has always been to redress the maximum number of cases/grievances the same day or at the earliest.