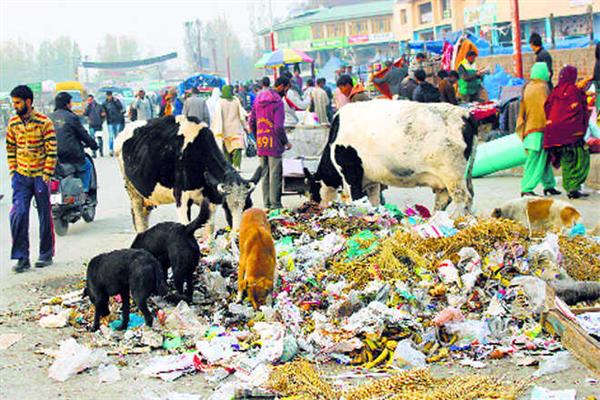 Srinagar, August 09:The residents of Khalid bin Waleed Colony and Zaffar Colony of Natipora Srinagar Tuesday appealed to Srinagar Municipal Corporation (SMC) to install garbage dumpers in the interiors of the area so that locals do not feel inconvenienced ahead.

The locals told Rising Kashmir the area comprises Khalid bin Waleed Colony, Irfan Colony, Zaffar Colony, Stadium Colony etc but unfortunately, not a single garbage dumper is installed in the interiors of these colonies.
"In absence of SMC dumpers the locals feel immense hardships to contain the daily waste that comes out from every household", the locals said.
They said though SMC has deputed a vehicle in the area for gathering garbage "It comes twice in a week only".
"Locals are compelled to stock the waste and other garbage at their homes for days, that often put the lives of children and ailing at risk", a local said.
He added it becomes troublesome for households to stock garbage at home for days during scorching heat. "The locals use to shoulder dust bins and filled garbage bags to those areas where dumpers are installed", the local added.
The residents appealed to Srinagar Municipal Corporation (SMC) to take up the matter on priority and install a few garbage dumpers in the area for the convenience of the local population.
When contacted by Chief Sanitation officer SMC Srinagar, Nazir Ahmad Baba, he said that people should visit the office and file grievances so that matter will be taken up through due procedure.