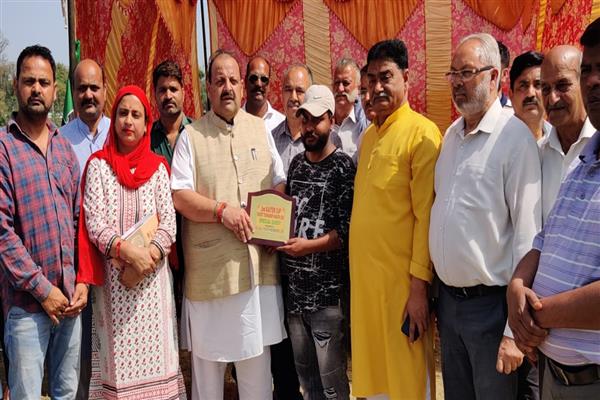 In all, 14 teams participated in the tournament, which drew a large number of cricket lovers to watch the matches.

Giving away the Winner and Runner Up trophies, Senior BJP leader Devender Singh Rana appreciated the players for their excellence in the game, saying there is no dearth of talent in Jammu and Kashmir but the need is to fine-tune their capabilities and make a mark in national and international sports events.

He said Jammu and Kashmir has already produced some ace cricketers who are making their mark in the national team as also in the IPL. This is highly encouraging and rekindles hope about best of the times in the field of cricket.

“Our youngsters are second to none and provided opportunities, coaching and avenues, the day is not far when they will shine in the cricket horizon of the country”,  Rana said.

Rana appreciated the enthusiasm among the budding cricketers and said that over month long competitions will place them in good stead to face the competitive world with vigour and confidence. He wished success to the participants, saying though just one team will make it to the top yet this should not be the end of the game. “In sports there is always another time”, he said and hoped that by emulating this spirit the players will do their best and play with commitment.

Devender Rana also complimented the organizers for holding the tournament, saying this will go a long way in providing larger canvass to the budding cricketers. He said holding of such events are imperative for identifying talent, sharpening them and to provide them opportunities to perform, first at a limited scale and then in various tournaments at the local and the national level.