‘My Youth My Pride’ event concludes in Rajouri 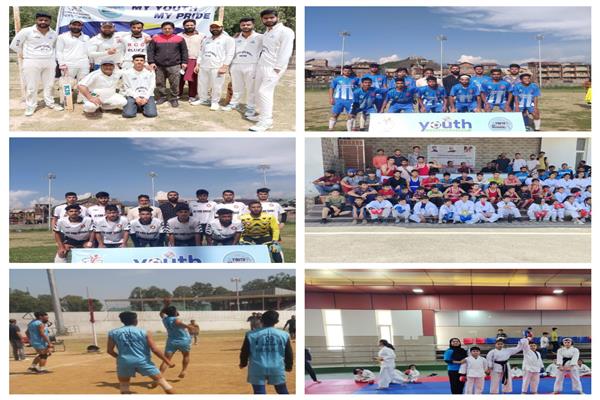 Srinagar, April 17: As part of the ongoing "My Youth My Pride" initiative of the Sports Council taking sports to every nook and cranny of J&K, two-day-long sports competitions organized at Sports Stadium Rajouri concluded today.

Events in the disciplines of Badminton, Boxing, Taekwondo, and Volleyball were held in the border town over 2 days which drew crowds from the entire district. A massive gathering thronged the stadium to be part of the sports initiative in which more than 250 athletes comprising both boys and girls participated.

The Chief Guest on the occasion was Dinesh Sharma Municipal councilor Rajouri while Ashwani Sharma was the guest of honor and Nisar Choudhary graced the event as a special guest.

Speaking  on the occasion, the chief guest applauded the efforts of the government and Sports Council for providing the best facilities and opportunities to the youth of J&K to realize their potential and secure their future through the recently launched sports policy.

He also appreciated the organizing committee of the event including Bashir Ahmed Manager,  Sports Council, and Coaches for playing a pivotal role in conducting the event in the border town.  Besides a large gathering, others present on the occasion included officials from Youth Services and Sports and other departments, as well as some former players and coaches.

'We are in the process to change the sports landscape of J&K, be it by putting up new infrastructure or upgrading existing ones, coaching, and learning programs or organizing talent hunt programs, and also conducting competitive events' said, Alok Kumar Principal Secretary to Youth Services and Sports.

He also added that the “My Youth My Pride” initiative has been received well by all and the reach-out program has been a great success.

This is part of the larger scheme to reach out to all athletes at their doorsteps and more such programs are in offing, said Nuzhat Gul Secretary Sports Council.

Meanwhile, in the Kashmir division, 2nd round of the Spring Shield T-20 Cricket Tournament is in progress at Nanil cricket field in Anantnag. Young Islamia Anzwala and GSM Mattan registered comfortable wins and qualified for the next round.

In yesterday’s last match of the day, the modest target of 90 runs set by Wonder boys was chased easily in the end by Young Islamiya Anzwalla though it required damage controlling from their middle order to reach the target for the loss of 6 wickets. Man of the match went into the kitty of Iqbal for his brilliant bowling performance of claiming 4 wickets.

In today's first match of the fixture, MIE Akura locked horns with GSM Mattan. Akura after winning the toss gave a target of 153 runs to their opponents with Rayees scoring the highest individual score of 38 runs. GSM Mattan scaled the target in the penultimate over of the match with 5 wickets in hand. Junaid for his well-composed innings of 65 runs in the chase earned him a man of the match award.

The second match of the day between Mattipora Sports Club and Star Sports Mattan was in progress when reports last came in.

Meantime, the last match in the qualifying round of JKSC Youth Football League-2022 being played at Gani Memorial Stadium, Srinagar was played between SCFA Bandipora and Sopore FA yesterday was won by the former by a margin of 3-1, registering their entry into the final round.

The encounter was crucial for both the teams and it was a must-win situation for both the teams to stay alive in the league. Though  Sopore FA drew first blood in the first half but could not maintain the lead as Bandipora scored back to back 3 goals in the second half. With this win, Bandipora earned 6 points and entry to the final round of the league, thus becoming the fourth team to do so. Zahir of Bandipora was adjudged player of the match for scoring a stunner and assisting one in the pursuit to win an all-important game for the team.

Today, the first match of the final round will be played at Synthetic Turf TRC Srinagar between J&K Bank FA and Baramulla FA.

The events across J&K are being held under the banner of  “My Youth My Pride” initiative of the Sports Council.