My mother is my inspiration: Author and child prodigy Rubayata Umeed 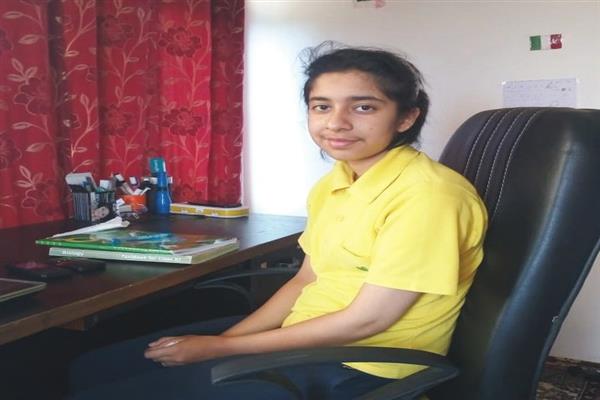 Born in the Tangmarg area of Baramulla and raised by a single mother, Rubayata Umeed, 16, is an award-winning child prodigy who was ranked amongst the top 100 debut authors of India by Critic Space. Studying currently in 12th class, Rubayata has also been awarded the Best child author award for her fantasy book Wizards X Beasts by ARL literary Awards. In an interview with Rising Kashmir’s Abrar Mattoo, Rubayata Umeed and her mother Dr. Hameeda Mir give insights into what it means to be a writer in Kashmir.

What made you start writing?

Rubayata Umeed(RU): I would say that my inclination towards writing has always been there, but due to school work, I could not get time to transform it into a book or a compilation. I have always been imaginative and used to perceive amazing characters. To keep my ideas safe, I began to write them down during my winter break in 2018. Eventually, these ideas transformed into my novel Wizards X Beasts.  To be honest, I had never thought that I would become a writer.

What sort of writings have you been putting down?

What are the names of your books, what are they about?

RU: The name of my debut novel is Wizards X Beasts. It’s a fictional story that revolves around the war between Wizards and Beasts living in the galaxy called Debris. While the Queen of Debris tries to find ways to gain more power, her nemesis from the Wizard's Estate of Debris tries to bring her down. My second novel is titled Zero: Dream, Football, Alfresco. It is a story about a boy named Alfresco who struggles at getting good grades but is really good at football. So, he decides to become a footballer like his father. With the support of his friends, family, and his best friend dog Arata, he sets out to fulfill his dream and overcome difficulties. During his pursuit to become a great footballer, he has to face his father’s enemies as well who attempt to wreck his ship.

How did you publish your books and what sort of appreciation have you received thus far? (Awards, prizes, and tokens of love)

I have published my books through different self-publishing platforms. My debut novel was published by Notion Press. Similarly, my second novel was published by Woven Words. For my debut novel Wizards X Beasts, I was recognized as India’s one of the top 100 debut authors by Critic Space. I was also awarded the Best child author for Wizards X Beasts by ARL literary Awards. I was appreciated as one of the four young female writers of Kashmir. I was also appreciated among the top 50 influential authors of India by The Spirit Mania. As a token of love, I was appreciated and encouraged by famous columnists Reyaz Ahmad Mir and Fayaz Ahmad Ganai in their columns. My books were beautifully reviewed by well-known reviewers like Dr. Raghuram Shastry and Swapna Peri. A famous author Arvind Narsima appreciated me through social media. I was awarded a Certificate of appreciation and a Certificate of membership by JKIFTS (J&K Innovative Foundation for Transforming Society).

What are your inspirations?

My mother Dr. Hameeda Mir is my first inspiration. The nature and the natural beauty of my Kashmir have also a great influence on my growing inclination towards writing. I also draw my inspiration from Japanese Anime shows which are worth a treat and one of my favorites among them is Death Note, penned down by Tsugumi Ohba and illustrated by Takeshi Obata.

What motivation can children find in your books?

I have always and will continue to motivate children to follow their dream and passion.

What are your thoughts on reading?

What role did your mother play in facilitating your writings?

My mother supported me in all my pursuits. She helped me in typing and publishing my books. She remains available to listen to my stories anytime anywhere and gives valuable inputs that improve my writings.

How do you see writing as a career choice? If you want to become a fulltime writer, do you see any scope in it?

Writing as a career option has an equal footing as other choices. It depends upon one’s interest. Writing will remain with me as a passion but becoming a full-time writer needs proper training.

What are you working on at the moment? Can your readers be expecting more books from you?

My third novel is under publishing process at the moment. It will soon be available online. I don’t want to spill the beans regarding the story. But the book is targeted at the audience of my own age group. I am covering issues like depression and drug addiction among teens.

What message do you want to give to the youth?

Stay away from distractions. Focus on your ambitions and work honestly. Try getting involved in productive activities like sports, reading, writing, painting, etc.

Dr. Hameeda Mir is a single parent who has raised Rubayata on her own and is a professor of Physics at Government Degree College, Tangmarg. Though it was an unconventional choice on her daughter’s part, in this conversation she talks about how she navigated Rubayata’s passion for writing and tried to support her best.

How did you first take Rubayata's inclination towards the written word? Or was it you who inculcated the temperament for writing in her?

In her early childhood, I had a glimpse of her vocation as a creative child. She used to play different characters of anime shows with her cousins or sometimes alone. A couple of times, I casually suggested that she pen down the dialogues she used to create for her roles. Being ambitious about Mathematics and Physics, I rather gave special attention to improving her mathematical skills.

In 2018, when I sent her to my brother’s house to get coaching and I visited her after one month, to my surprise she handed me a 100-page notebook with her first story written on it. That was the first time I realized her natural inclination for writing and thereupon I tried to help her in whatever way possible.

What challenges have you faced to help her during her writing pursuits?

To continuously spare time for typing her manuscripts and sending them to the publisher remained a challenge. The lack of a special platform for such talents in schools is obviously a hindrance in grooming interests such as writing. Special training for creative writing at the school level is missing. The main challenge I faced was her mounting disinterest in my passionate fields of science, especially Physics and Mathematics. Overcoming all these challenges was a big feat, but fortunately, I am motivated to support her in her pursuit.

What lesson do you want to convey to the parents out there whose children want to pursue art as a Life/Career choice?

Be strong support to your children. Help them in choosing and pursuing their career, be it arts or sciences; the passion and the interest to follow one’s passion matters. Rewards are in the hands of God.

These exclamations almost capture the palpable excitement of Harry Potter fans, commonly called as Potterheads, all around the globe. Kashmir has also got its fair share of crazy Potterheads. The hullabaloo among the Harry Potter fanbase is about the much-anticipated release of ‘Return to Hogwarts’, a special feature celebrating the 20th anniversary of the franchise's first film, "Harry Potter and the Sorcerer's Stone."

Based on the fantasy novels of J K Rowling, a series of seven fantasy movies was made in 2001. The novels in 2020 created a record by becoming the highest-selling series of novels ever. The first film of the series "Harry Potter and the philosopher's stone'' was released in November 2001.

In the first official photo of ‘Return to Hogwarts’ which is going to be released on Jan 1, 2022, Hermione Granger (Emma Watson), Harry Potter (Daniel Radcliffe), and Ron Weasley (Rupert Grint) are seen sitting and chatting in the Gryffindor common room.

Wardha Makhdoomi, a 3rd-year medical student and a Potterhead says, "Harry Potter marathons are a part of my post-exam celebration."

Her Harry Potter fan journey started when her brother introduced her to the series.

"I remember I could connect with the movies immediately because I looked a lot like Hermione. That was the only thing that connected me with the series at first but then gradually, every bit of it started making more sense because I started reading it and '', she said

Harry Potter makes Wardha feel at home. Even today in her 3rd year of medical school, she can't get enough of it. She has even decorated one wall of her hostel room with Harry Potter pictures and fancies.

“When I joined my medical school in 2019, I was anxious and alone. It was our fresher's party with Harry Potter as a theme. The props and decoration and every bit made me feel at home. My favorite marathon was last year when we were quarantined for 14 days in a hotel at the boulevard, I remember the kind of happiness I got from watching Harry Potter by the side of Dal for the billionth time,” said Wardha.

Another crazy Potterhead, Sehran a student of class 10 is eagerly waiting for January 1, 2022. He has even marked the date on his calendar as important.

Sehran tries his best to replicate the Harry Potter style in his life. From his T-shirts and school bags to his spectacles, he has everything that makes him look like a crazy fan.

“When I saw the movie for the first time, I was blown away by seeing the magic. I found the movie very adventurous. A lot of things, including the unicorn, were introduced to my imagination by Harry Potter only,’’ Serhan said.

“Expecto patronum!” This is what we have been doing for more than 10 years now,” said Falak and her friend Insha who think Harry Potter made their childhood very special.

“All parts of the series teach you one thing or the other. This series has shaped my fantasies. Throughout the series, it reflects the importance of friendship. I don’t think there would have been any better thing than harry potter in our childhood.” Falak said.

For Saiba, another Potterhead from Sopore, ‘Return To Hogwarts’ is like a dream come true.

"The fact that Harry is coming in winters makes me feel like Kashmir is returning to Hogwarts,” she said.