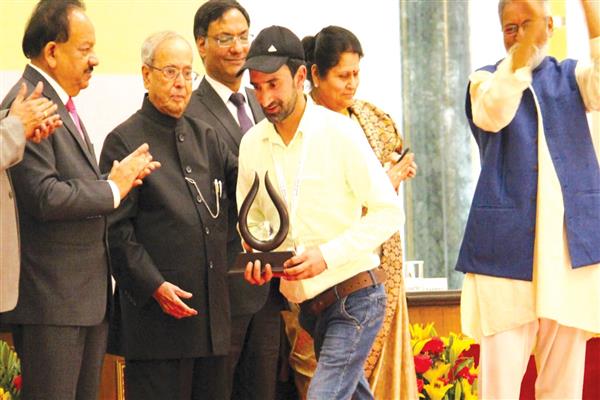 While repairing mobile phones, Mohammad Shafi finds it difficult to hold a number of things together and feels a strain in his eyes. In order to ease his and others' problems, he devised a semi-automatic device for repairing the mobile phones.

Having a locomotor disability in one leg, Shafi, a mobile technician by profession, said that the device can be used for repairing Printed Circuit Boards (PCB) and other small gadgets.

Belonging to a hamlet village of district Anantnag, Shafi couldn’t go to school as there was no school in the vicinity then. Later, at the age of 8, his father who is a blacksmith by profession got him admitted in a government school but Shafi couldn’t study after 12th class due to financial constraints at home.

To support his family, he started a mobile repairing shop. Having keen interest in electronics and machines from the beginning, he started making some inventions but due to their financial conditions he was not able to convert many of his ideas into practice.

The idea of making a semi-automatic device for repairing mobile phones came to his mind while removing faulty Integrated Circuits (IC) from the PCB of a mobile.

Shafi said, “It becomes quite difficult to hold the heat gun and tweezers at the same time. I felt that there should be a device which can help remove and place ICs on mobile phones and PCBs easily.”

Earlier, he had also made a multimeter kind of a device for himself to help him in repairing work. While developing the machine, he did not have any technical issues however due to the lack of money, he could not purchase and use new components.

He searched for old and used components from old and damaged printers, cameras and other damaged electronics gadgets. Thus, it took him quite some time to develop the machine.

The device comprises all the components in a single machine. It is a semi-automatic set-up which has a PCB holding bed movable along Y-axis and a desoldering heat gun attached to a movable X-axis controlled with a joystick. A camera is attached to a gun to capture the zoomed-in view of the PCB/ICs kept below, which is displayed on the small LCD screen. The heat gun is turned on and off with a switch. Tweezers are attached besides the heat gun, which moves down and grips and the IC when controlled with a mouse. The X axis can be locked for proper positioning of the tweezers. It also has a multimeter to show the voltage current and other electrical parameters. The machine is operated by DC power supply while the heat gun can be operated by AC or DC power supply.

Among many best things of the machine, Shafi said it’s the LED display, which would magnify the areas which were hard to see with naked eyes. “It makes the repair easy and is also good for the eyes,” he added.

Shafi said, “I got in contact with National Institute Foundation Jammu and Kashmir Cell located at Institute of Technology, University of Kashmir, Zakura Campus through my cousin and then things eased for me. They provided me with support for prototype development.”

Shafi has received a state award for his innovation entitled PCB repairing machine at Rashtrapati Bhawan New Delhi from the then president, Pranab Mukherjee.

He has also made a charging jack removing machine. The charging jack in mobile phones usually gets damaged. He made a small device which can be used to open the screw and can also be used to replace the jack. The idea of the machine is a bit same as all the components are fixed together in one machine.

“Traditionally it was done with the screwdriver, jack gel, tweezer and heat gun separately but every tool is in my single machine which makes work easier and saves a lot of time too. As such it is an automatic machine, a person can simultaneously do other work,” Shafi said.

Shafi has made a number of innovations in the past as well. One of the innovations is about a lantern using salt water as a fuel and needing no charging from electricity or batteries.

Another one is a portable walnut huller which reduces the manual involvement in the process of hulling. Living in a poor area where people face the shortage of electricity, he has also made an inverter as well.

“I have made a number of innovations and am in the process of making many more. I want to use the innovations to make daily tasks of the people easier. Through these innovations, people are benefited and it also provides employment to a number of people,” he said.

He considers his disability doesn't make him any less than the others.

Shafi is presently working on different new prototypes with incubation support from National Innovation Foundation, India.  He also has a small unit where he sells the products he makes.