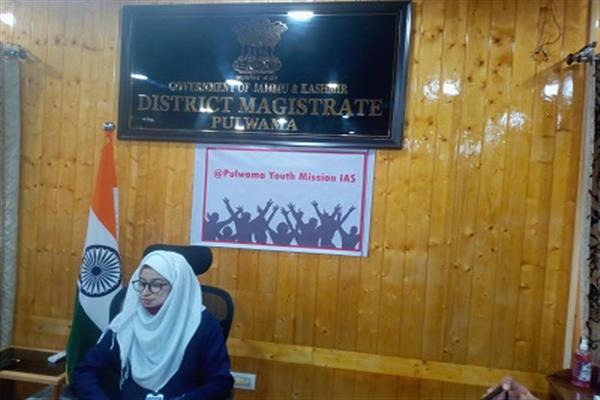 The visitors who had come here for the redressal of their grievances were surprised to find students sitting on the chair of deputy commissioner Pulwama.

Ghulam Mohammad, an aged resident of Dogripora village, was dumbfounded when Deputy Commissioner Pulwama, Baseer ul Haq Chaudhry directed him to get his grievance redressed by a girl student who was sitting on his official chair.

The DC was seated in one corner of his office chamber after offering his official chair to the school girl.

With tears in his eyes, Wali Mohammed brought it into the notice of the student DC that the license of his business unit was cancelled due to change in the line of activity and other reasons.

He pleaded before Nissa that the General Manager of the concerned department should be directed to renew his license.

Nissa heard the case patiently and forwarded it to the concerned department with recommendation for renewal of the license.

Around six students which included boys as well as girls were chosen out of 40 students from government higher secondary school Karimabad.

All the students sat on the chair turn by turn for around 15 minutes during which they heard grievances of the residents and passed orders for their redressal.

"The decisions taken by them will be taken in official records and implemented," Deputy Commissioner Pulwama, Baseer ul Haq Chaudhry, said, adding that the implementation report will be shared with the students and their school.

Mehrun Nissa told Rising Kashmir that it was a great experience for her to sit on the deputy commissioner's chair. She heard two grievances, one was solved on the spot and other was forwarded to the concerned department for redressal.

Khusboo Nabi, another student deputy commissioner said that she made a wish to Allah on the occasion.

"The moment I sat on the chair I prayed to Allah for helping me to become an IAS," she said, adding that she will chase her dream with determination.

Authorities here said that the innovative activity was a part  mission IAS for Pulwama youth.

Deputy commissioner Pulwama, Baseer ul Haq Chaudhry, said that there was a lack of communication  between youth of Karimabad and administration concerning development, vision for youth and their empowerment.

He said that they have been working for the past one and half years to strengthen the link between youth of the village and administration.

" Pulwama youth mission IAS is an endeavour in this direction, the youth are informed about civil services and guided properly so that they pursue it passionately and some of them can assume responsibility of future administrators," he said.