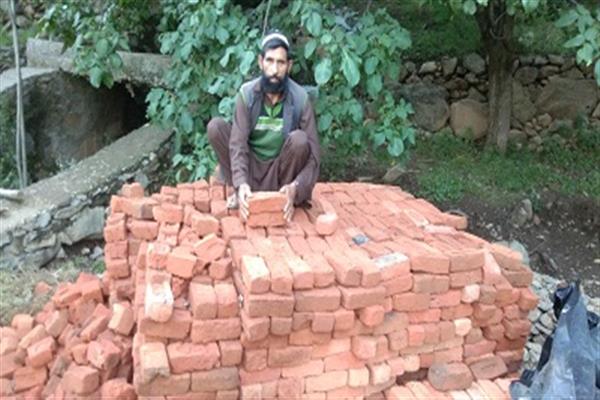 ‘Mechi Kondah’, an oven-shaped tandoor used in ancient times in Kashmir for baking of bricks, was seen in every village and people would make bricks on their own whenever construction was planned.

With the advent of commercialization and new techniques, the occupation of making bricks at home is now the forgotten traditional practice of Kashmir. However, the old-fashioned practice is still active in Malangam village of North Kashmir's Malangam village.

People in Bandipora's Malangam village can still be seen making bricks on their own and then baking them in a traditional oven ‘Mechi Kondah’.

Abdul Lateef, a local and one of the experts in bricks making, told Rising Kashmir that he has been in this art from forty years and is trying to transmit this skill to the younger generation.

"I will try to keep this art alive till my last breath because it has been my livelihood for decades.”

He said that the Malangam village was once known for making bricks in the traditional way but currently only few families are associated with this art."Let others follow the modern trend but I will keep trying to revive it,” Lateef said

"This art should not die as it was one of the examples of a Kashmiri being self reliant. How far will we be dependent on others? If one doesn't have money to buy bricks, he can make bricks at home with knowledge of this art", he said.

He said that this was not only Kashmir's tradition but a sign of brotherhood also as whenever someone was planning to construct a house; villagers would come to help without any returns.

He said that with the passage of time people of Kashmir have become more dependent now and are shying away from hard work as they prefer to buy things from the market.

He said that the art should gain momentum in every part of Kashmir valley.

Notably, in ancient times people would make bricks for construction purposes themselves with neighbors joining them in the process. The art was only used for self purposes. However with the advent of latest technologies, the art has been ignored and it is rarely seen nowadays in Kashmir.