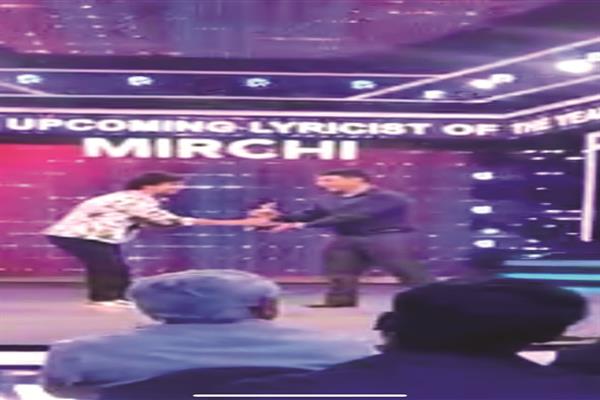 Peer Zahoor besides being an officer in Jammu and Kashmir Police is an avid poet and writer. His love for writing and poetry is known in local circles as many of his Kashmiri songs have received a lot of appreciation and accolades from people.

He was adjudged for the honor by Smule Mirchi Music Awards by a panel headed by famous Bollywood legend Javed Akhter.

The officer told Rising Kashmir over the phone that he finds solace in writing since his college days. Even after donning the police uniform his love for writing and poetry never faded, nor did it interfere with his policing duties.

"Managing professional responsibilities and my passion for writing and poetry was never simple. I somehow found a fine balance between my profession and passion," he added.

Speaking on his song, Peer Zahoor said that due to the COVID-19 situation the movie could not be released in theaters and was released on Netflix, “however the director had predicted that the song would be a hit.”

The song ‘Rubaru’ for the movie ‘Ginny Weds Sunny’ penned down by Peer Zahoor has already got millions of hits and views on YouTube.

“It has been around two years when the movie was released, and this award is really encouraging for me, though nothing can stop my passion for writing, but certainly this recognition gives a good feeling, and I dedicate this award to all my friends, colleagues and well-wishers,” he added.

The police officer has a message for youth: Those who are getting involved in drugs, should shun the path and build on their positives in life.

“There are always ups and downs in every body’s life, but one should draw positives out of negative situations and make it their strength and those who do it are successful” he added.

Pertinent to mention that Peer Zahoor has penned down a number of hit Kashmir songs including ‘Peer Myanio, Khodaya, Salam-e- Wazwane, Meinz Raat, Mangun Tagima, Rouvmut, Dildar which have already received a lot of appreciation.

Last year, on ‘Father’s Day’ SoundKraft Kashmir d released his song ‘Baabo’ dedicated to fathers for their selflessness, love, and affection towards their children. The song received millions of hits on social media.

‘Ginny Weds Sunny’ is a 2020 Indian Hindi romantic comedy film starring Yami Gautam as Ginny and Vikrant Massey as Sunny. It is directed by debutant Puneet Khanna and produced by Vinod Bachchan.