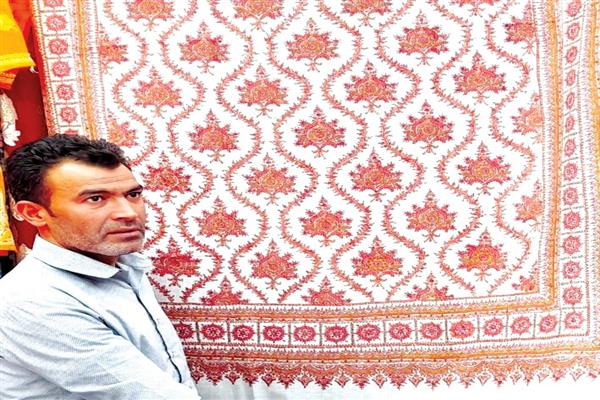 Two years after Jammu and Kashmir government declared Kanihama village in central Kashmir’s Budgam district as Kashmir’s Handloom Village, the move has generated hope for the artisans who are associated with the making of Kani Shawl and other products.

Farooq Ahmad Darof Kanihama is one of the kani shawl weavers who had been associated with weaving of shawl by hand over the past 30 years.

He has received two awards for his work including National Award in Pashmina kani shawl weaving in 2011 and Indian Handloom Brand in 2016 for shawl and stall.

Dar’s family is also associated with shawl weaving for decades. Since his village was declared Handloom Village, many things have improved in terms of basic amenities, he said.

Dar is not only a weaver but also a trainer. He has been training 10th and 12th class students in order to encourage them to learn the art.

“They are trained at a training centre in Kanihama village. We also give training to people who are interested in making shawls and other handicrafts,” he said.

People of the village are happy and have been encouraged by the government’s move. It has generated hope as many artisans had left the traditional art and are coming back now.

“Government has provided nearly 30 sheds for weavers. Now, artisans will get benefits directly. Basic facilities have also improved over the past two years,” he said.

Earlier, the artisans weren’t registered with the government but now many camps have been organized in the village which has also boosted the confidence of artisans.

Locals said that it will help to boost tourism of the area as it is located on Srinagar-Gulmarg highway and can also generate employment opportunities for the local youth.

“People had forgotten arts but we are thankful to the government for taking this initiative in order to preserve and revive the art for the generations to come,” he said.

Dar said many tourists visit the place to see the handicrafts. “Now, customers can directly order a product which is very important for the artisans,” he said.

“There is a hope among artisans. Now people more interested. People who had left the artwork midway are now coming back after the village was declared handloom village and are reviving the art,” Dar said.

The village also has a common facility centre where artisans are trained. The centre is used to hold programs and for exhibitions to showcase the products.

Dar said government has provided an online portal where the artisan can directly sell their products and can courier directly. “Now every weaver can take benefits of the facility.”

While appealing the artisans to continue the hard work and improve their skills, he says that the government should also promote the shawl wearing at national and international platforms.

In adjoining areas of Kanihama like Butpora, Roshan Abad, Nengerpora, Mazhama, people are associated with the art. “There are nearly 500 artisans in these areas,” the locals say.

The shawls made in Kanihama are known for its quality and go to national and global markets but artisans demand welfare schemes for the betterment of artisans.

Kashmir is famous for weaving of specialized fabrics. Handloom sector has a unique place in the socio-economic structure of the valley and women have time and again contributed for it.

Dar’s wife, Mumtaza Bano, 35, is also a shawl weaver and weaves shawls at their workplace where 25 to 30 people weave the kani shawls and earn their livelihood.

“I also encourage other women to come forward and learn the weaving. It is good and it has a lot of opportunities since it was declared as a handloom village,” she said.

Another shawl weaver, Faisal Ahmad has been associated with this trade since 1998. For him, making shawl is delicate.

Faisal said since the village was named as Handloom Village, people are very happy and they are hopeful that the government will further push the handicraft sector.

“There is a hope for better tomorrow. The government should implement welfare schemes that will benefit artisans and people associated with the craft,” he said.

“Today, people from many foreign countries visit the village in order to have a glimpse of the shawls and they often visit here to see our work. They feel very happy here,” he said.

“Combined with twill weave and using finest yarns of different colours, it creates an effect that is almost impossible to reproduce by mechanical means,” he said.

Shah said they have created a place where people can sell their merchandise and where live demonstrations can happen and people can see how kanis are made.

“We have developed the basic facilities there. The advantage of this place is that it is on Srinagar-Gulmarg road. We want tourist to stop there and have a look at the place,” he said.

He said they are also planning to put on display some hoardings and also promote the place on social media so that people can stop there and can visit the place.

Shah said Kanihama has a unique USP which needs to be promoted and highlighted among tourists visiting Gulmarg, Tangmrag which will improve tourism and generate economy.

In 2020, the Ministry of Textiles declared Kanihama as Handloom Village to promote the art form at the national and international level and it became the first such village in J&K.

As per officials, the village produces almost 700 shawls a year. The name of the village was also derived from the craft as it’s the original place from where kani shawls originated.

“The most important thing is assure quality to the customers. There is lot of machine made stuff in the market which is misbranded as hand made,” he said.

“We are focussed on Geographical Indication (GI) tag. Kani shawl has got GI tag years before but its label has not been launched,” Shah said.

He said in a couple of months, they will launch QR code-based application of Kani shawl that will give complete parameters to the customer which will build trust among people.

“We have given space to 200 people to sell their merchandize at different places. We are committed to promoting and helping artisans in marketing,” he said.

Kanihama is famous for the traditional seat of pashmina and kani shawl weaving. The village was a convenient and suitable place for having around handloom weavers.

Kani weaving is believed to be an art indigenous to Kanihama and traced to 3000 BC. This exquisite shawl was once used by Mughal kings, Sikh Maharajas and British aristocrats.

The Ain-i-Akbari records that Emperor Akbar was an avid collector of kani shawls. While the name kani comes from the area where this particular art comes from, Kanihama, the word 'Kani' – in Kashmiri – also means a small wooden oblong spool.