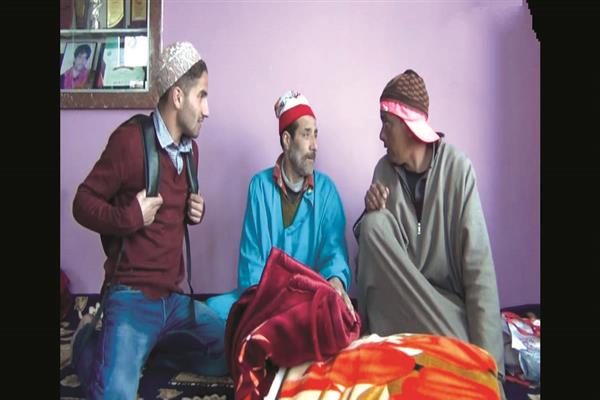 Coming from the Bhand background (a traditional folk theatre of the valley) Gulzar Fighter and Basihr Kotur were a delightful duo that put laughter and joy in our lives when we were children. Their hilarious dramas and enactment of the most serious situation with a funny texture gave us both happiness and many life lessons. Though I, later on, moved to Bollywood, Hollywood, and various other cinemas around the world, I could never entirely forget these two comical names: Bashir Kotur and Gulzar Fighter.


Born Gulzar Ahmad, in a Maskhar family whose male members played a joker’s role in the traditional Bhand folk theatre, Gulzar Fighter was drawn to satire and wisecracking since early childhood. His great grandfather, Ismail Maskhar, was the personal fool of Maharaja Hari Singh, the last monarch of Jammu and Kashmir.

Similarly, Gulzar’s partner in comedy, Bashir Kotur, also hailed from Hanji Pora, Wathora, a small countryside hamlet in Budgam, known for producing the funniest troupes of Bhand artists that used to amaze the people in every nook and corner of the valley with their ingenious folk performances in the past. Though there are still almost a dozen Bhand troupes in Wathora, their traveling days are gone and their comical performances, called the Pather, or Jashn, have been reduced to government functions and programs. Clearly, people (especially the old) are missing those laughter doses.

“Anyone who makes people laugh is their well-wisher. Amidst everything that troubles human existence, those who make people laugh are doing them good – in a sense that they make them forget the everyday price that they are paying to live,” Gulzar says while exhibiting pride over his vocation and lifelong liaison with comedy and making people laugh.

Apart from serving a larger message of peace, morality, and human ethos, both Gulzar’s and Bashir’s satirical serials were always funny in nature and made people hold their stomachs in laughter.

Though Gulzar had a background in humor and wisecracking, Bashir came from a ‘Magun’ family. This meant that if he entered a troupe of Bhand artists, he couldn’t be anything less than a leader of the troupe, and had to play the roles of kings, riders, and warriors. Nevertheless, Bashir always had a talent for comedy and he made sure that performances as Magun in the troupe are comical and engaging as well.

As a child, Bashir says that he had the habit of imitating those people whom he considered funny. Sometimes he would imitate the village’s old and sometimes the beggars and the dimwits. As a result, he inculcated an explosive sense of humor. Bashir’s funny eye movements were often put on the cover of the CDs to lure eyeballs.

During his tenure as a CD artist, Bashir began to use a humorous alias, Kotur (pigeon), in place of his given surname. This was not an unusual act, because it was a regular practice amongst the humourists of that time to add comical last names instead of their given surnames and it was what they were known by through the valley. A comical last name was as if a unique identity that certified them as an established humorist.

Both Bashir and Gulzar had started their journey in front of the camera during their school years. A teacher at Secondary School Wathora had introduced them both to Doordarshan as child artists where they brought life and frivolity to the programs. This started their reel journey.

While continuing their reel journey by occasionally appearing in Tv and Radio programs, the funny duo dropped out of school in 6th standard and joined Ghulam Ali Majboor’s National Bhand Theatre.

Soon, in the early nineties, Seth Rafi, a promising actor of those times offered the duo to take part in recorded films, and to this, the duo agreed. These films were sold as CDs and DVDs and earned the duo unparalleled fame in Kashmir valley.

“We never needed any professional teaching; it was in our blood. We could sing, dance, and make jokes. It was in our blood because a Bhand artist is an amalgam of all arts. So, when we started shooting funny films, our inherited talents came in handy and both I and Gulzar began to give explosive performances on screen,” Bashir Ahmad Bhat, Alias Kotur, said while speaking with Rising Kashmir.

Though it never looked like it, in some sense Bashir’s and Gulzar’s films were a revolutionized version of the Bhand Pather, or Bhand performances. They took elements from it for sure, because their films too had a central message, revolved around a theme, and were first and foremost, funny and diabolical in nature.

Even at the age of 52, both Gulzar and Bashir have retained their unique funny wit and often stuff comical utterances into serious conversations. Though both the artist have been detached from their artistic work for the past three years, they go about their day-to-day work while spreading laughter and joy, teasing children, and joking with the adults.

During the past three years, Gulzar Fighter, has been largely home-bound due to Covid-19 and various other reasons, but his contemporary, Bashir Kotur, works as a hawker of cloth. Though Bashir is aware that it isn’t befitting for an artist like him to do lowly jobs, but unlike Gulzar Fighter, his children are small and the responsibility to earn the family loaves of bread falls upon him. Both the artists live extremely humble lives and experience heart-wrenching poverty.

Both Bashir and Gulzar consider themselves unfortunate and say that they couldn’t monetize well on their talent. “We were not educated enough, and neither we had our own banners, the result was other people capitalized on our art and we are now in constrained circumstances,” Gulzar laments.

While Gulzar largely remains at home and struggles with failing health, Bashir works on weekdays and goes fishing on Sundays. Bashir says that his funny wit and his acting prowess still help him while going out to purloin cloth in the market. He says that his silver tongue is a blessing from the art and where people earn one hundred, he can make two hundred. Bashir is also a director of a Bhand theatre namely Karam Bhuland folk Théâtre where he attempts to keep the eons-old legacy alive in Kashmir.

The advent of social media, cable TV, and other forms of entertainment have fast changed the dynamics of entertainment and the funny duo is unfortunate to not have been able to keep pace with the changing times.

Nevertheless, both the artists show extreme commitment to their art and say that till death, they will remain the same artist and humorists that they have always been. Both Bashir and Gulzar consider themselves first and foremost a Bhand folk artist, and then everything else. They have been associated with folk theatre for nearly the past 40 years.

Gulzar’s two older sons are involved in copper work and carpentry respectively, but his third son, Tanveer, has chosen to walk on his father's path. He has taken his father's alias as his last name and calls himself Tanveer Fighter.

“Bhands don’t leave much behind for their children, only a Surnai and their art,” Tanveer Fighter adds in the passionate tone of an artist.

Gulzar isn’t happy with his son’s choice, mainly because he is anxious that since his son is walking the same path as him, he too may stumble upon the same constrained destination where money is short and making ends meet becomes a lifelong affair.

Gulzar strongly advocates that government should consider assigning some sort of retirement stipend for retiring Bhand artists for the sake of their children and wives, “because the Bhands give their life to art and in the end, they are left with nothing but regret for not having followed a different vocation in life. If Bhands are not supported, this traditional folk theatre would soon fade into oblivion,” Gulzar adds with conviction.

"All the awards that I have received have given me nothing more than wasting the space of my Almirah's in the drawing-room. I am thinking of replacing them with flowers," Gulzar adds further in disappointment.

Gulzar’s friend and fellow artist, Bashir Kotur, reflects his views on the subject as well and says that the government has the responsibility to take care of the Bhands and it should show some willingness.

In a message to the young artists of Kashmir, Bashir says that “those artists who want to pursue art must consider the limitations of art in Kashmir. Collectively, we have done a great disservice to art in Kashmir, nevertheless, if anyone wants to follow art or is following at the moment, they should not bear in mind that they will make fortunes or ride costly cars. Art at best can help you earn respect and fame in Kashmir—not money or fortune.”