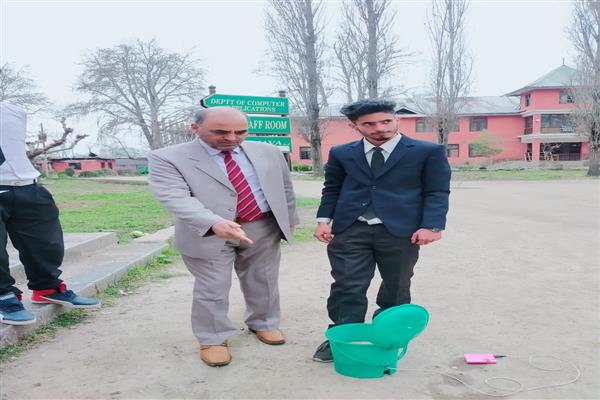 Aijaz Hussain, a young innovator is working on a number of projects which can not only improve the medical equipments but also make them affordable for the common masses.

Focused on health based innovations, 21 years old, Aijaz from Saderbal, Srinagar, is working on an EEG (Electroencephalogram) controlled wheelchair for paralyzed patients.

While presenting the statistical data of 2021, he mentioned that among 5,00,000 disabled people, there are 1,60,000 persons suffering from physical disability and most of the people are facing difficulties in moving from one place to another.

He said that a wheelchair is the most commonly used device for movement. However the existing wheelchairs either require the help of another person to move or the user’s finger to operate the wheelchair through joystick or buttons.

The EEG controlled wheelchair  made by him will work by capturing the beta waves or EEG signals from his brain which will further control the wheel chair.The use of electroencephalogram (EEG wave) based control schemes can change the shape of the lives of the disabled persons, he said.

He said, “Brain-computer interface can have a profound impact on the life of paralyzed or elderly person or people with locked-in syndrome as it offers control over various devices without any necessity of movement of the body parts. Such people can control with attention or by blink.”

Talking about the cost, he said that he is trying to develop a low cost wheelchair by using the available cheap parts and incorporating a brain-computer interface considering the affordability of people.

“If there is any wheel-chair like this, it costs almost 40 lakhs but I am reducing the costs. Using the attention level and blink, the wheelchair will cost Rs. 1,50,000 and using the EEG signals of a specific movement, it will cost Rs 4 lakh,” he said.

One of the important features in the EEG controlled wheelchair is Destination Mapping. The wheelchair develops a virtual map by taking command from a smart interface based on EEG signal as the user moves around and independently reaches desired positions.

Having done intensive research, he has consulted more than 50 papers on wheelchairs from reputed journals like IEEE, science direct etc.

“An innovator can make an innovation if he has enough knowledge of previous things. Even if a machine requires a slight modification, you should have all the information, only then you can upgrade it,” he added.

Talking about his other innovation, he is also thinking of making a shockproof and affordable pacemaker. Pacemaker is a small electronic device, implanted in a chest to help regulate heart function.

He said that a person with a pacemaker has to undergo a lot of problems. “If a person receives electrical injuries that can hamper the functioning of pacemakers and in such instances, a person can get a heart attack and can even die. My shockproof pacemaker will reduce the problems to a larger extent and also it will be affordable. Also the higher efficiency factor of the battery will be taken into consideration,” he said.

Inspired by Mostafa Chamran Save’ei, an Iranian Physicist, Aijaz was interested in electronics from childhood.

“Since childhood, I was interested in devices and would often fiddle with them. I always wanted to make devices which would create a good impact on society and benefit the people in the health sector particularly,” he said.

Few years ago, Aijaz developed a Smart Dustbins using Arduino where the lid of the dustbin will automatically open when a person comes with trash. The dustbin works with the help of an ultrasonic sensor. His another innovation is the semi-automatic irrigation system using UNO - a system of irrigation or watering of plants and trees automatically based on the Arduino microcontroller integrated with mobile phones and GSM modules.

Based on the same concept, the Object Avoidance Car was made by him.

Robot with artificial intelligence, Voice Controlled Home Automation using Arduino and Automatic Street Lamp are some of the other models that he has made previously.

Aijaz has presented the models at college and school level and has received huge appreciation. “I have received good responses from everyone, especially my teacher Shubeena Kuttey who has helped me in every possible way,” he said.

Belonging to a middle class family and struggling with the funds, he said that the materials used in making prototypes are expensive. “I can’t afford to buy material on my own which is expensive and sometimes the material is ordered from outside because one can’t find many things available here,” he said.

To promote innovations among children and students, Aijaz along with his team organizes small robotic workshops. He has made an NGO named Imam Mehdi library with a friend Nida Fatima who is a student of electrical engineering, where students from various colleges and universities attend various robotic workshops. The NGO also provides books to the needy students.

He said, “Kids are also interested in innovations and they only need a helping hand. All I want is to be a change for the better."