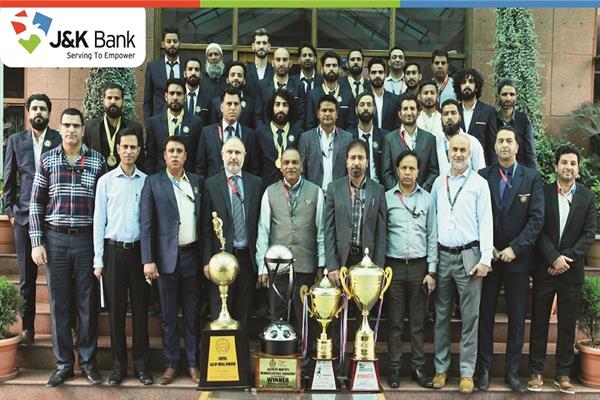 A title triumph in prestigious Police Martyrs Memorial Football Tournament 2022 capped the fruitful season for Bank’s football team that saw the team pocket as many as seven tournaments and emerging runners up once. Bank’s academy graduate and senior team member Danish debuting for India turned out to be a cherry on the cake as Bank continued to dominate at domestic circuit.

Congratulating the team and Danish for the stellar performances, MD&CEO said, “I am happy to be amongst you all. You are our stars. All of you and associated officials deserve appreciation for continuously delivering winning performances. Winning seven tournaments is no mean achievement. Seeing your passion and talent, I am sure our shining stars will perform across the globe. One such example is Danish. He is our real ambassador”

He assured the players that Bank would do whatever possible to support the football team. “We are mulling to have our own football ground for Bank’s team. Work hard, play with passion and make efforts to keep the Bank’s flag aloft,” he said.

President Syed Rais Maqbool hailed the team for taking the Bank’s rich legacy forward and living up to the expectation of its fans and colleagues alike.

“Our football team’s history is filled with title triumphs across the country and it is most sought after and cheered side in the domestic circuit. More importantly, since the inception of football side way back in 1987, it has produced number of players that rose through ranks to exhibit their talent for big clubs and some of them achieving the ultimate dream of representing their country. The latest product of our football academy, Danish Farooq has made us proud debuting for India recently. The Bank has groomed Danish since his U-15 days and we hope he keeps shining as a star at the national level too,” he said.