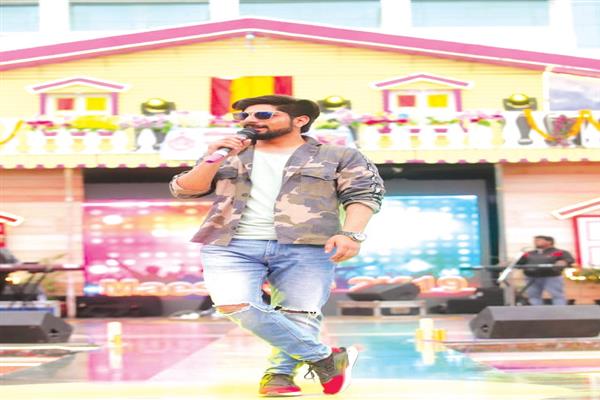 Jibran Dar, an actor and anchor who impressed people with his skills onscreen, is now winning hearts with his delicious Harissa and homemade pickles.

Jibran, after returning from Mumbai during Covid outbreak, had never thought that he would stay in Kashmir. Being fond of cooking, Jibran says that he knows everything about spices and can cook every Kashmiri traditional food.

“Once I made Harissa and it was very much liked by all. An idea came to my mind that I should start a café where Harissa can be served to both men and women as you won’t find women having Harissa in most of the Harissa shops here,” said Jibran.

However due to the pandemic, the café witnessed less rush so Jibran decided to deliver the Harissa to customers’ homes packed in beautiful mud pots. Within no time, his Harissa became one of the most popular in the town.

Then he tried his hands on making homemade pickles and initially started giving a complimentary half kg bottle of pickle to his customers. “People started loving it too and demanded for more pickles. Then my mother suggested that I start a commercial business of fresh homemade pickles,” said Jibran.

Since that time, his customers are growing and he is serving homemade and fresh Kashmiri pickles. The processing unit is in the backyard of his house with all the necessary equipment.

“We prepared 80 kg of mixed vegetable pickle in the first batch and due to the high demand, it was finished within two days. During the month of Ramadan, 2,000 kg of pickles were sold within five days,” he said in delight.

His pickles are now available in Srinagar, Budgam, Baramulla (Sopore) Ganderbal and are exported to other parts of the country. “I have been getting orders of pickles from Dubai and I am looking forward to more distributors across the globe,” he said.

Hailing from Hyderpora, Srinagar, Jibran has pursued Mechanical Engineering from Haryana. Like any other parents, his parents too wanted him to be an engineer but Jibran’s plans were out of the box during the time when acting as a career in Kashmir was no option.

“You have to jump high to land yourself somewhere big and for that you have to achieve that escape velocity. Such things would not have happened in Kashmir because of the conservative society and other things,” he said.

He started his journey by hosting smaller events but he believed, “if your spirit is high you have to take smaller steps to achieve bigger dreams.”

While hosting many shows, he got a chance to travel to different places and tried hard to get into a reality show. “After trying for 6 years for the auditions of the MTV Roadies, I was finally selected in an online audition as a wild card entry. The video had gone viral and was seen by millions of people,” he said.

To survive in this industry, initially, he had gone through tough times while giving auditions.   He said, “It’s very hard to stay in this industry for a long time. There is nepotism and many other things but my luck and hard work supported me.”

The major support during ups and down in his career, was provided to him by his parents. “My parents have supported me through thick and thin. Parents are an important bestowment to a person from his Allah. I explored the process and travelled many places which couldn’t have been possible without my parent’s support,” he said.

Belonging to a well-off family, his father is a government contractor, mother an educational consultant and his brother a civil engineer.

So far, Jibran has hosted shows with many big screen celebrities, Sonu Nigam, Baadshah, Honey Singh, Shakti Kapoor and many more. He has also performed a dating show, Stupid Cupid with Karishma Tanna. In 2018, he hosted the WinIndia Dance and Music reality show on epic channel along with Raghav Juyal and Sukhemuzical doctorate.

A street show, Jibran ki Jibber Jabber with reliance entertainment was hosted by him where he would ask funny questions and riddles to people on the street.

He said, “Hosting in shows or streets is not that easy. I have always been outspoken which has helped me a lot in my life and my passion took me forward and made me who I always wanted to be. Everything changes with time and life finds a good way only when one works with passion.”

Having hosted the corporate shows as well, he said that he has hosted shows for Essel Group, Zee Media, Book My Show, Kotak, Max Life and many other renowned cooperatives.

In 2020, Jibran also appeared in Milestone, a movie released on Netflix and directed by an award-winning director, Ivan Ayer. Talking about his role, he said, “I have played the role of a Kashmiri husband who lives in a flat with his wife and children and I face a fight with a truck driver who is the neighbor in the movie.”

The movie is about a truck driver who has a threat of losing his job and travels 5,00,000 kilometers on the road.

Having spent most of his life outside his home to chase his dreams, he said he still has to work hard to achieve his set goals. “I don’t think there is any scale which is meant for measuring success. It's all about keeping going and learning from everything. The goal is yet to be achieved; I am almost there. Every day I face new challenges and according to that I keep setting myself for further life. I am always open for criticism and suggestions,” he said.

Talking about Kashmir he said, “Lockdown being a part of every Kashmiri's life was one of the obvious difficulties which I did overcome by the grace of Allah by adapting to certain alternative measures but another problem I have noticed which stops many people from achieving their goals is the stereotypical nature of Kashmiri community who every now and then try to hold you back not knowing that in my case it paves way for more success.”

He says that his plans for his children are to focus on them to learn different skills in different fields of life. “This is how we should raise our kids at this stage. Hopefully I will never let them do any degree in education.

We send our children to schools and college and few people on the panel decide whether they are worthy for the next class or not, that can demotivate someone in life.  Different people are born with different reasons in life. Hopefully my kids will be the reason for better change in society,” he commented.

Jibran says that his message to youth is to follow their passion and live life to the fullest not on the terms of others but on their own. “Rome was not built in a day. If you decide anything in life and are serious about your goals, at some point of life, you will reach there,” he said.